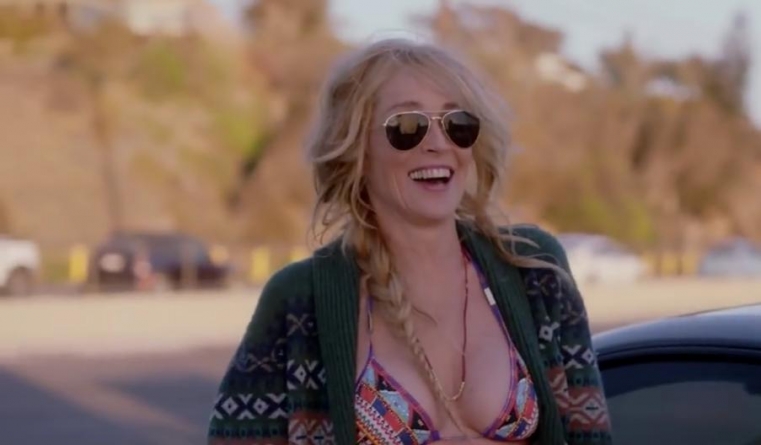 After a long career of playing femme fatales and trophy wives, it is great to see Sharon Stone at the center of a film where she gets to smile, laugh and fall in love.

All I Wish Mike McClelland

All I Wish works very well as a showcase for the too-little-seen Sharon Stone and other supporting players but unfortunately offers little else. The problem here seems to be one of ambition; while the story of late-blooming love – and, life, for that matter – is sweet, the script doesn’t bite off much more than the average Hallmark Channel holiday film. Though debut writer-director Susan Walter does everything perfectly well, with no element negatively drawing attention to itself, the material never rises above the simply pleasant and pleasantly simple. Walter’s résumé, which includes assistant/trainee work on films like Alien: Resurrection and Twin Peaks: Fire Walk with Me, suggests a talent for weirder, riskier material, but little of that surfaces in All I Wish.

The plot follows Senna, a misfit in her late forties who has spent years trying to find love and trying to make it as a fashion designer. Despite her efforts, she’s not been abundantly successful in either pursuit. She occasionally meets up with her mother Celia (the venerable Ellen Burstyn, excellent as always) who is still hopeful that Senna will find a nice guy and settle down. When she meets Adam (Tony Goldwyn, dreamier than ever as he nears 60), it doesn’t initially seem as if he’ll be the one to make Celia’s wish for Senna come true. But as the film checks in annually on Senna’s birthdays, it slowly becomes evident that Senna and Adam are meant for one another.

The annual approach to the love story probably looked cute and different on paper, but it is frustrating when it comes to rooting for Senna and Adam, as the audience is given a tiny portion of the development of their relationship. Unlike Boyhood, which checked in every now and then but felt authentic because of the characters’ actual aging, All I Wish’s long-term approach to its story feels like a contrivance rather than an innovation. It’s a spin of sorts on the famous play Same Time, Next Year, but the annual approach worked there because its leads actually only met up one time every year, so the audience wasn’t missing anything.

Still, All I Wish is obviously a labor of love for all of those involved, and the commitment of the key players elevates the film’s above-the-line and below-the-line components. Walter’s script was on the famous Black List way back in 2008, and apparently things were really set in motion when Sharon Stone initially came on board to play the role of Senna’s mother Celia. Then Stone asked Walter if, perhaps, Senna could be aged, and the film could rather follow a middle-aged woman seeking her dreams. The move is a smart one, as one of the things that All I Wish really nails is representation for actors who’ve had the audacity to age past 50. Key players Stone, Goldwyn, Burstyn and Famke Janssen are all over 50 and all showcase sexiness, craft and confidence.

While all of the performances are strong, Stone really has a chance to shine here, and she imbues Senna with the requisite charm and beauty of a romantic comedy lead while also providing the character with vibrant humanity and the slightly bittersweet edge of a happy person who has missed out on the chance to make a few dreams come true. As it turns out, Stone’s eyes – so often used by filmmakers as daggers – are perfect for relaying happiness, wisdom and surprise. After a long career of playing femme fatales and trophy wives, it is great to see her at the center of a film where she gets to smile, laugh and fall in love.