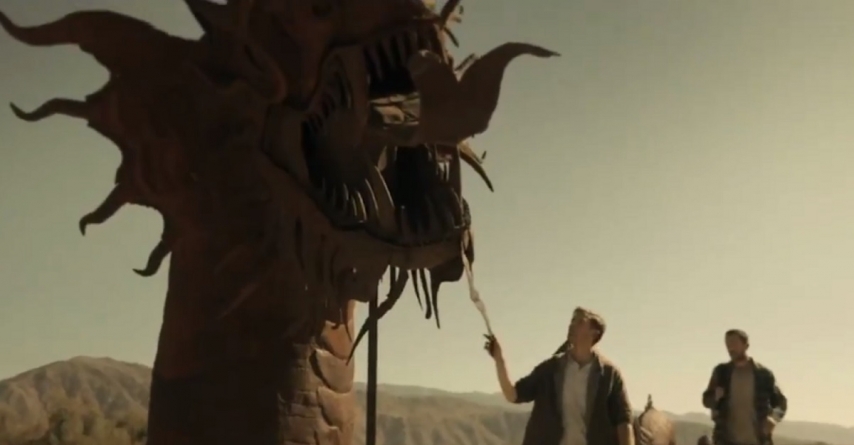 Introducing a UFO death cult in the first act typically requires seeing one go off by the third, but The Endless ends up going more “Twilight Zone” than Heaven’s Gate. Movies about cults often establish a seemingly idyllic commune early on, only to see the pastoral façade melt away into something sinister, and there are indeed malevolent forces at work here. But it’s a heady mix of quantum physics and paranormal activity that pose the greatest threat in the third film by directorial duo Justin Benson and Aaron Moorhead, who also play the two lead roles: brothers who broke away from a supposed UFO cult as teenagers a decade prior. After receiving a cryptic, grainy VHS message from one cult member about an upcoming “ascension,” the brothers implausibly feel compelled to pay a visit to the cult for closure, but in doing so they encounter more than they bargained for.

Justin has filled Aaron’s head (the two characters share first names with the actor-directors) with plenty of negative associations about their former communal family, asserting to his younger brother that all men underwent ritual castration and that mass suicide was surely imminent. Upon arriving, however, not only do the brothers discover that all the males still have their testicles intact, but nobody seems to have aged all that much in the past 10 years. Aaron becomes smitten by the commune’s fashionista, Anna (Callie Hernandez), the woman who appeared in that grainy video, and who looks younger than Aaron despite sharing fond, and somewhat unsettling, memories of helping to clothe him as a young boy. The two nights the brothers spend within the community they once made front-page news by escaping are so pleasant that Aaron contemplates staying permanently. Meanwhile, Justin runs into a handful of encounters with strange phenomena, and he wonders about a padlocked shack that no one ever enters.

Aaron’s desire to stay increases as he begins to realize he’s probably better off in the cult than in what’s amounted to an endless cycle of trying to make ends meet on the outside. But as he and Justin begin to experience weird hiccups in space-time, first manifesting as two moons in the sky and then as a man named Shitty Carl (James Jordan) appearing both as a corpse hanging from a noose and simultaneously as a living, breathing man standing next to them, it becomes evident that there’s something not right with this patch of land. Strange geological formations dot the landscape like supernatural boundary markers, and battered, dated technology like old video cassettes, Polaroid photos and bulky hard drives containing unsettling images seem to appear out of nowhere.

In their third project as co-directors, Benson and Moorhead are actually resurrecting characters and scenarios found in 2012’s Resolution, though this film doesn’t require that prior knowledge to be fully appreciated. Free will versus predetermination serves as a compelling thematic element, though its exploration only tends to skim the surface. Too often the film’s trippy metaphysics angle for shock and awe rather than to dig into deeper questions about the nature of existence, wringing as much tension from a pulpy premise as possible without offering much philosophical heft. But The Endless shows how an interesting idea, vivid cinematography and committed performances can result in a gripping sci-fi thriller regardless of budget. Benson and Moorhead use the fear of the unseen to their advantage, never belaboring the appearances of several cheap CGI vortexes and otherwise keeping the malicious supernatural force that pulls the strings hidden, making the film far more frightening as a result.