Like fellow countryman Ken Loach, Mike Leigh has long been the champion for the working class in his films, frequently depicting lives that would be considered too “ordinary” or characters too “unattractive” for most filmmakers. Meantime, one of his earliest, was first shown on television in 1983, and it may very well be the template for many of Leigh’s most beloved, subsequent works.

Leigh has no qualms telling the story of characters living on the edge. In Meantime, we meet the Pollock family, who rent a depressing apartment in the East End where Frank (Jeff Robert) and Mavis (Pam Ferris) live with their grown children, Mark (Phil Daniels) and Colin (Tim Roth). All three men collect unemployment with no job prospects in sight. Mark is quite intelligent, but he is cloaked in bitterness. Meanwhile, Colin is somewhat slow and living in the shadow of his older brother. Compounding their misery is Mavis’ sister Barbara (Marion Bailey). When we first meet the Pollocks, they are visiting Barbara and her husband John (Alfred Molina) in their upper middle-class home in the suburbs. Leigh begins the film showing the tension and resentment that exists between both families, a palpable anger that Mark and his father share towards the “haves” of the world. 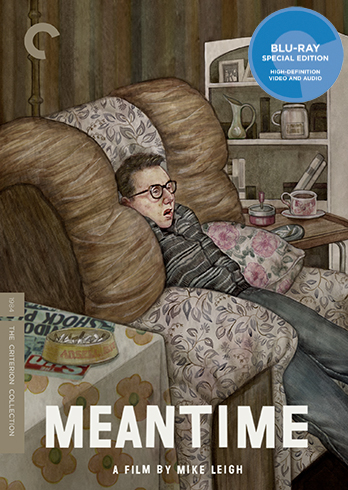 Much of the film follows Mark and Colin and their co-dependent relationship. Mark looks out for his younger brother who, hidden behind thick glasses and a perpetual stare, doesn’t really have much of his own volition. Though Mark says quite cutting things, he finds his identity in being his brother’s keeper. Rather than work, the two men hang out at the pub where they drink and carry on with others who are also on the dole. Among the crowd is the skinhead Coxy (Gary Oldman), who has taken an interest in Colin. Though Mark is friends with Coxy, they jockey for control of the dim, impressionable young man.

Through his characterizations, Leigh is working to accurately show how poverty not only robs a person of their self-esteem, but also the deep trenches of despair to where having no money or job can send an individual. Anger seethes over most of the scenes as the Pollocks argue and demean one another. Appliances in their apartment are constantly breaking, and climbing the social ladder is laughably out of the question. Meantime can be suffocating in its constant depiction of hopelessness, yet Leigh draws such complex and interesting characters that the film never feels completely oppressive.

The misery is further compounded when Leigh compares Mavis’ household with her sister’s in the suburbs. Everything is clean and orderly in Barbara’s house while the four Pollocks can barely fit in the tight apartment with its solitary bathroom. However, Leigh does not turn Barbara into a frothing, oblivious symbol of Thatcherism. She invites Colin to come do some work for her, an effort that is eventually derailed by Mark in one of the movie’s most biting and wrenching sequences. Not everything is perfect in the suburbs either, and Mark has no trouble rooting out Barbara’s issues. However, even Mark’s humanity comes to surface in this scene when he insults his aunt and then tries to comfort her.

Meantime may be a minor entry in Leigh’s filmography, but it’s a fascinating look at the roadmap for future efforts such as Secrets & Lies, All or Nothing and Vera Drake. His characters are always richly drawn with hidden desires burning right beneath the surface. Young actors such as Molina, Oldman and Roth, who would go on to excellent careers, were wise to work with Leigh. Though his films became more confident, Meantime shows that Leigh knew exactly what he wanted from the very beginning.