Though his name is not synonymous with classic French cinema in the same way a Jean Renoir or a Francois Truffaut is remembered, Sacha Guitry’s body of work is ready for reconsideration. Though Truffaut and the other writers at Cahiers de cinema lauded Guitry’s films, his movies are generally unknown apart from the most ardent cinephiles. Thankfully for companies like the Criterion Collection, the wild career of such an artist can now be celebrated.

Guitry came to cinema late. Between the first and second World War, the son of a renowned stage actor, actually mainly made his living writing and starring in plays. Legends of his lifestyle only helped increase his status as Guitry not only married five times but engaged in torrid love affairs with a variety of actresses. During the Nazi occupation of Paris, Guitry refused to make films for the Germans and even helped his Jewish friends flee the city. Resentment for Guitry’s existence as dandy built up, however, and following World War II he was accused and arrested for collaboration with the Nazis. The imprisonment took its toll on his health and when he was finally released, cleared of all charges, a deep well of resentment rankled the star as he felt rejected by society.

Returning to work, Guitry began La poison (1951) a pitch-black comedy that served a thinly veiled swipe at the French judicial system. The film tells the story of Paul Braconnier (Michel Simon), a misanthropic gardener who absolutely hates his wife, Blandine. Guitry casts Blandine (Germaine Reuver) as an unsympathetic nag who not only is an inveterate alcoholic but is planning to kill her husband with rat poison. Things seem hopeless for Branconnier until he hears a radio interview with the defense lawyer Aubanel (Jean Debucourt), who is happily celebrating his 100th acquittal. Branconnier visits the lawyer, pretending that he has already killed his wife in order to eke out the proper defense strategy. Armed with this knowledge, Branconnier returns home, knifes Blandine and sets the scene based on Aubanel’s unwitting advice. He then blackmails the lawyer into representing him, all the while cheered on by the other townspeople who are hoping for an acquittal. 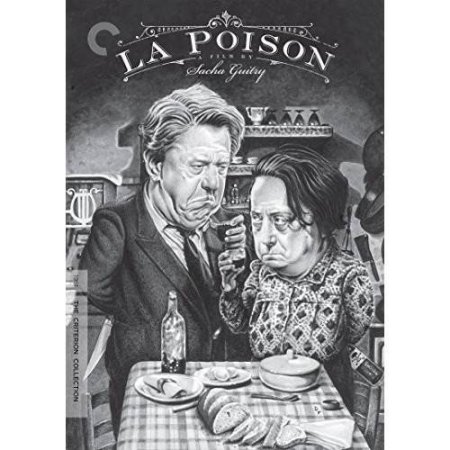 Sound like misogyny? Consider the title. Typically, poison in French is masculine (Le poison). By making the noun feminine, Guitry’s title changes meaning towards a woman who is poisonous. Blandine is completely unredeemable. Abusive to her husband and often drunk, Guitry know what he is doing here. Though Branconnier is shallow and, ultimately, a murderer, the director still imbues the character with some likable traits. It also helps that the film great Michel Simon with his unique face is able to instill such a wretched character with humanity. It’s like Tom Hanks trying to play a villain (see Road to Perdition). Mr. Hanks can play a complete scoundrel, but we can’t help liking him.

According to film professor Ginette Vincendeau, Guitry’s misogyny was a by-product of the times. “He echoed a wider process highlighted by historians of the Second World War and the liberation in France, who have shown how women often functioned as scapegoats for the historical humiliation of defeat.” Guitry presents Blandine as a drunken pariah whom everyone in the village hates. While Branconnier is enmeshed with the daily comings-and-goings of the village, Blandine is friendless and vile. In fact, she is planning to murder her husband. While Guitry’s true target was the French society who rejected and incarcerated him, this one awful woman was a good enough proxy.

Guitry gets his true revenge in the film’s final sequence. Branconnier is on trial for his life and single-handedly outsmarts the judge and jury. Just by following the advice of the unwitting Aubanel, all of it within the realm of legality, Branconnier is able to murder his wife and get away with it. What does that say about a legal system that indicts innocent men and frees guilty ones? Guitry was a man wronged and poison flowed from his pen. His subsequent films would be less caustic, but La poison remains a vicious, and funny, document of a star getting his revenge through his art.