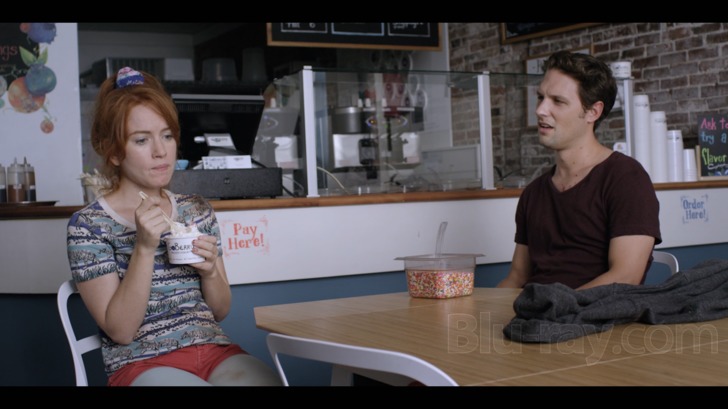 Night of the Living Deb deserves its place at the top tier of horror/comedies.

Occasionally, the cosmos will bless the traversers of streaming hell with the perfect movie. A title will scream for attention, rising above the endless thumbnail images like a lost soul wailing for absolution. Night of the Living Deb is such a movie.

Written by Andy Selsor and directed by Kyle Rankin, Deb found life as a Kickstarter darling in 2014. Billed as a zombie rom-com, Selsor and Rankin uploaded the first 16 pages of the script to entice backers. They made their modest budget, got the always working Ray Wise and Michael Cassidy of The OC and Smallville fame attached and headed to Portland, Maine to make their movie. All they needed was a woman who could embody the sweetness and sarcasm of the title character, Deb. The job would fall to Maria Thayer, who is so funny and delightful an onscreen presence that you may find yourself hoping that Deb takes on werewolves, vampires and all manner of monsters in an enduring franchise after the zombies have been dispatched.

The movie begins with Deb and her friend, Ruby (Julie Brister), drinking on the night of the third of July with the forlornness of those abandoned by their families at Christmastime. Deb’s eyes are drawn to Cassidy’s Ryan Waverly, and Ruby badgers her into engaging the handsome stranger in some conversation. The shenanigans have barely commenced when Stacy (Syd Wilder), Ryan’s fiancée, interrupts. Words are exchanged. An engagement is broken. And Deb and Ryan are left alone to binge drink and blackout.

The next morning Deb wakes in Ryan’s bed, disoriented and fully clothed. He is on the phone, full of regret and trying to figure out how to dump her. Neither remembers the events that took place hours before, but assumptions make the walk away just as shameful. As with Simon Pegg’s Shaun in Shaun of the Dead, Deb wanders into the zombie apocalypse, bleary-eyed, disbelieving but ready to act. She is further motivated by the fact that the only other person alive in town is the handsome Ryan who Deb wants to be near for the purposes of repopulation.

Deb is a camera operator at the local news station with dreams of becoming an anchor. Ryan is the heir apparent to Frank Waverly (Wise), a small town energy magnate, but wants nothing to do with his father’s company. Ryan is an idealist and environmentalist, the antithesis of his polluter father, but Ryan enlists Deb to help him get to the Waverly mansion where his father, fiancée and brother Chaz (Chris Marquette) are killing zombies and celebrating America’s birthday. Deb reluctantly agrees. Jokes are cracked, pop culture gets referenced and many a zombie gets squished along the way.

It turns out that the Waverlys supply the town with water, and Frank and the governor conspired to use an experimental water treatment technology that caused the zombie outbreak. Frank thinks the governor is hooking him up with a chopper out of town for him, his boys and Stacy, making Deb the uninvited fifth wheel. Plans to drug Deb and leave her behind become moot when Stacy makes things awkward. Deb drives off in the middle of the night, unknowingly avoiding the zombies that attack the Waverly mansion.

Deb hits a roadblock set up by a military contractor of the governor’s employ. She finds out that all the zombies remain in Portland and the outside world has no idea what’s happening. Communication has been cutoff. The only way the world will ever know anything is by the satellite hookup at the television station. She is reunited with Ryan and they head to the station together to tell their story to the world while avoiding getting eaten by the zombie horde. The day must be saved, and only Deb can do it. Her dreams of the anchor desk and knowing Ryan carnally are within reach.

We lost Ash Williams this month when Starz cancelled Ash vs. Evil Dead, leaving a deep void for a horror/comedy hero. Deb Clarington is the opposite of Bruce Campbell’s character in every way, qualities that make her more than a worthy successor. The Evil Dead stories didn’t find their comedic tone until their second movie, where Campbell and his collaborators unleashed their manic imaginations. Night of the Living Deb exists as a fully formed spoof of both horror and romantic comedy conventions. The mash-up causes genuine, even unexpected laughs that are drawn mostly from the chemistry between Cassidy and Thayer, but it’s really her show, and she’s having a blast. Night of the Living Deb deserves its place at the top tier of horror/comedies with Army of Darkness, Shaun of the Dead and What We Do in the Shadows, and, if the world is just, we’ll get to see her again.