Music festivals are now a dime-a-dozen in the United States, interchangeable playgrounds where corporate sponsors dig their hooks into unsuspecting young people as they dance in unapologetic face paint. Although a few make strides to be different (such as Pickathon), many feature a variation on the same acts, same food and same vibe, just in different locales. It seems the goal of most music festivals is the fleecing of attendees, charging exorbitant costs to live in sub-human conditions and eat sub-par food for a weekend. And of course, everyone is documenting the entire festival with their cell phones.

It’s miraculous that a documentary such as Festival, Murray Lerner’s film about the Newport Folk Festival from 1963 to 1966, exists. We have gone so far down the path of capitalistic cynicism that it’s refreshing to look back at the true roots of the American music festival: the coming together of people with a similar mindset to fight back against the tensions of the day, and to also enjoy music at its purest form. Instead of distracting its attendees with pyrotechnics, Honda banners and tents featuring Xbox games, the Newport Music Festival acted as a fomenter of change. One national tragedy after another mounted in the mid-‘60s, from the assassination of JFK to the struggle for Civil Rights to the conflict in Vietnam. Instead of being placated by iPhones and other creature comforts, the attendees of the Newport Folk Festival were galvanized by not only the litany of injustices the country faced, but by the idea of breaking free of the shackles of life in the ‘50s. 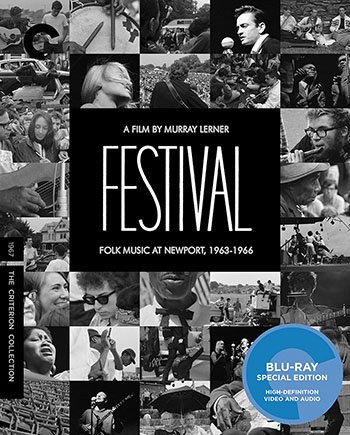 Although that festival still exists today, it has been superseded by behemoths such as Bonnaroo and Coachella. In the late ‘50s, the Newport Folk Festival began as an offshoot of the Newport Jazz Festival. Established by promoter George Wein, the festival soon broke free of the confines of its moniker. Folk could mean anything having to do with populism, music that aspired to be true and real. In the film, we see musicians such as Johnny Cash and Son House playing alongside the usual suspects like Pete Seeger and Joan Baez. The festival stood in direct opposition to the blue-blooded residents who lived in Newport. The audience dressed simply, and while the drugs that flooded Woodstock and Altamont are not to be seen in Lerner’s film, you can fill the psychedelic wave about to hit. Yes, it was a step forward, but the audience was still mainly white and homogeneous.

A simple pastiche of performances, shots of the crowd and interviews with musicians and audience members, Festival is a time capsule of artists who have either passed on or have now reached the twilight of careers. We see a fresh-faced Bob Dylan playing “All I Really Want to Do” (and again in the infamous performance where he went electric). Peter, Paul and Mary come across as more rock ‘n’ roll than their folkie reputation allows us to believe. We catch glimpses of Paul Butterfield and Mississippi John Hurt. Most of all, we see audiences silently and respectfully watching the musicians, attention rapt, lost within the performance and not staring down at a device.

More concert documentaries from Monterey Pop to Gimme Shelter would soon follow Festival. An innocence may pervade Lerner’s film, but this is not an America without its tensions. The young people here are nervous about their futures. There is war overseas, and Americans are dying. African-Americans are being brutalized and discriminated against. Yet, the music acts as something more than a panacea or distraction. It’s a way for the voices of the marginalized and the angry to join together in protest, even if most of the audience came from a place of privilege. A unity bloomed that I fear no longer exists in our country, a way for people to come together and fight against the bullshit of modern life for a weekend of music and the exchange of ideas. People these days go to Coachella and Bonnaroo and are constantly bombarded by corporate sponsors. We need to get back to basics, use the music festival to rail against the injustices that riddle our country like festering sores. If anything, Festival reminds us of how far we’ve come and how little we’ve progressed.