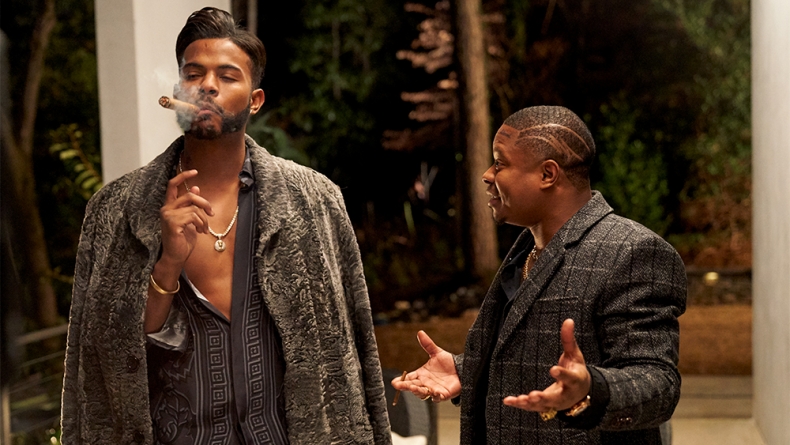 SuperFly doesn’t get that balance quite right, but it comes a lot closer than one would expect.

When a music video director makes the transition from short form album promotion to feature filmmaking, the least one can expect is a movie with a distinct visual style. Music video maven Director X’s mainstream breakthrough, a remake of 1972’s Super Fly, delivers the opposite; an entertaining movie handicapped by a confounding and ugly visual language.

X, real name Julien Lutz, began his career in hip-hop videos as a protege of legendary clip helmer Hype Williams. His earliest works, like Ghostface Killah’s iconic “Cherchez La Ghost” video, can still be counted among the absolute heights of the form, but in recent years, as music videos have become less exciting and more memetic, he’s helped Drake literalize his viral trolling for singles like “Hotline Bling” and “God’s Plan.” This new SuperFly isn’t his first feature, having already released under the radar films Across the Line and Center Stage: En Pointe, but it feels like a debut, given the big splash it’s making in marketing and its convenient tethering to a big soundtrack release from Atlanta rapper Future (stepping into Curtis Mayfield’s enormous shoes.)

The film transplants iconic drug dealer Priest (here played by the young Trevor Jackson) from ‘70s Harlem to present day Atlanta, keeping most of the character names and general premise, if deviating in ways both necessary and curious. Priest is successful for all the reasons a sympathetic criminal in a crime movie is. He’s smart, refined and stays under the radar, all skills he learned from his mentor/supplier Scatter (Michael K. Williams). Priest’s partner Eddie (Jason Mitchell) would be content to sell cocaine for the rest of his life, but Priest, spurred on by financial anxiety and fear of reprisals over a petty beef with rival street gang, wants the archetypal One Big Score so he can quit and go straight. Unfortunately, the steps he takes for that big finale leave him exposed and in danger of losing it all.

The film’s first act is frustrating in its simplicity, hitting all the typical set-up beats with clunky abandon, but it evolves into something far more interesting. What begins like a community theater staging of Carlito’s Way evolves into something far cheekier, made bleak and tragicomic with some startlingly black humor. The usual gangster movie plot points get hit with a claw hammer, right down to the Latino drug connect, the sweet love interest who wants out of the life and the respectability politics between savvy crooks who lay low and flashy blowhards fucking it up for everyone else. But when the movie pulls back from Priest’s arc to reveal the socioeconomic spider web surrounding his status and hustle, an intricate network of egos, fear and jealousy pile into a Jenga tower of dramatic portent.

It’s obviously not the most original structure for a crime film, but the film’s middle third has a more believable and relatable take on the tropes that, coupled with some effective but surface level commentary on the depressing intersection between race and economics, help the film stand out from other sexless blaxploitation remake’s like John Singleton’s uneven Shaft. Alex Tse’s writing isn’t as strong as Richard Price’s admittedly unspectacular work on that film, but where he fails in some rough expository dialogue, he shines in pacing and characterization. The film as a whole functions better as a dark comedy than a swaggering gangster picture, and much of that is on the cast.

Jackson’s Priest is miles from the gravitas of Ron O’Neal, whose iconic turn in the original is too high a bar to fault anyone for falling under, but he displays real potential. His charisma feels like post-Titanic, pre-Catch Me If You Can DiCaprio, a future leading man who needs more years and aged texture to be truly believable. His chemistry with Mitchell and Williams is palpable, providing some much needed reality in a film so otherwise cartoonish. (Priest’s rival gang literally call themselves “Snow Patrol,” dress in all white and come off somewhere between the Golden Lords from Meteor Man and John Leguizamo’s Tybalt from Baz Luhrmann’s Romeo + Juliet on the “extra” scale.)

Speaking of Luhrmann, let’s discuss this film’s biggest weakness: X’s schizophrenic visual storytelling. His decision to make the movie, shot on video, with a gross True Motion Blur interpretation of Michael Mann’s recent style, is disorienting and uncomfortable. X has very little acumen for arranging or framing action, so the hyperreal camera work mixed with often fuzzy, dark mood lighting means every shootout, every car chase, every inexplicable jiu-jitsu fight, all look like scrambled Spice Channel porn playing on the world’s largest 4K, OLED TV. You would think a guy who worked on Belly could at least make a pretty gangster movie.

But while the first act is a little perfunctory and the second a pleasant surprise, the film’s final third is a hilarious caricature that is difficult to deny. From rapper Big Boi as a Marion Barry-esque Mayor figure to Jennifer Morrison’s burnt out Jodie Foster impression as a corrupt, coke-sniffing cop, the movie devolves into the kind of batshit, DTV bukkake that it doesn’t matter that all the songs Future wrote for the film are lazy and boring. It doesn’t matter how much of a sore thumb Rick Ross’ cameo is. It doesn’t matter how borderline ridiculous Jackson’s faded perm looks.

Because SuperFly is at its best as a nihilist’s comic book fantasy approximation of life in the trap. All the King of Diamonds strip club authenticity of Future’s music is just window dressing compared to Jackson in the driver’s seat of an expensive car looking pensive while compose Josh Atchley drowns the audio out with Lethal Weapon sullen guitar wails.

Director X fumbles the bigger picture, especially with all the shots purposely meant to imply iconic Scarface level status, but he soars in the smaller moments between characters, the all too relatable frustrations surrounding being black in America and trying to get by. Hell, he even succeeds in a lot of the smaller comedic gags most dramatic filmmakers would bungle.

It just goes to show if you’re going to remake a blaxploitation movie, it’s best to temper that revolutionary edge with the right amount of pulp. SuperFly doesn’t get that balance quite right, but it comes a lot closer than one would expect.