Teaching, by profession, is about the art of control. One has to figure out how to regulate attention spans, behaviors and the flow of knowledge. You have to read the room, know when to ease up on the rote repetition or when to back off when you’ve assigned too much homework. Praise and criticism have to be doled out in equal measure. Give too much approval and it will get to a student’s head. Reproach a student more than necessary and you can lose their focus for the rest of the semester. Michael Haneke’s The Piano Teacher (2001), his adaptation of the 1983 novel by Elfriede Jelinek, explores the connection between teaching and sexual domination. But what if the teacher is actually a masochist at heart? They will still need to instruct their partner exactly how they want to be dominated.

The Piano Teacher tells the story of Erika Kohut (Isabelle Huppert), a middle-aged pianist who teaches at a prestigious Vienna conservatory. We glean from Haneke’s script that Erika was likely a child prodigy who never ascended to the level of fame that her domineering mother desired. Like Woody Allen said, “Those who can’t do, teach” and Erika is damaged from never realizing the dreams her mother likely instilled in her as a girl. Erika’s father has died in a mental hospital, also a stain on the family’s honor. And speaking of Erika’s mother (Annie Girardot), the pair share not only a small apartment in Vienna but a bed, continuing the dangerous, co-dependent relationship well past its sell-by date. 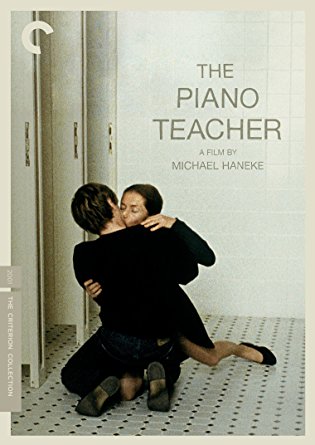 It’s also obvious that Erika has a strange relationship with sex. When we first meet the two women, Erika’s mother is confronting her about being missing from the apartment for a few hours. Erika claims she has just been out for a walk, but the mother presses the issue and Erika physically attacks her, pulling her hair. As the film progresses, Haneke allows us to see into Erika’s private moments. She visits a sex shop and watches pornography, fishing out cum-soaked tissues from the trash and holding them to her nose. In other scene, she wanders between cars parked at a drive-in. When she comes upon a couple having sex, she squats and urinates next to the car. We also see her sit on the lip of her bathtub and cut into her genitals with a razor.

It makes sense, in a twisted way, that Erika is so repressed. She teaches classical music, a dying art that most young people no longer care about. She has sacrificed her own youth and vitality for a chance at success that has always been out of reach and for a discipline that is slowly fading away. Meanwhile, her mother, who is also borne of a similar situation, lambastes her decisions, constantly keeping tabs on Erika’s whereabouts.

Enter Walter Klemmer (Benoît Magimel), the fresh-faced nephew of a Viennese family who hosts a salon in their rich home. Erika is there to give a recital and Walter, mid-twenties with perfect looks, finds her intriguing. Is he just a rake who likes the challenge of a difficult conquest or is there something more sinister under the surface? In Haneke’s other films, the “pretty boy” character is often one with murderous intentions. Look no further than Funny Games for the sublimation of that trope. Yet, Walter pursues Erika, even going as far as to audition for her advanced class and play Schubert, her favorite composer.

After Walter professes his love for Erika, the teacher presents him with a letter, a manifesto with exactly how she would like him to dominate her. She forces him to read the letter aloud, fantasies of bondage, violence, tongues up anuses. Walter, already frustrated from an aborted hand job, is disgusted, even more so in a later scene after, when he finally submits and allows Erika to fellate him, she vomits. In the film’s climactic moment, Walter gives Erika everything she asks for in the letter, but it’s unclear who is the victim or the victor in this scenario. Has Walter been a violent scumbag all along or has Erika finally taught him ultimate lesson? It’s unclear and uncomfortable, but it’s also just like Haneke to present us with no easy answers.

Though she was in her late-forties when she filmed The Piano Teacher, the film introduced Huppert to a wider audience. Her performance as the damaged Erika was widely, and justly, praised. It’s a brave role, one that a lesser actress could have never pulled off. In fact, Haneke told Huppert that he wouldn’t make the film without her. Throughout, Huppert is like a living mannequin, face frozen in a façade of impassive disdain. However, watch more closely and you will see there is much more, mainly hurt and self-disgust, running beneath the surface. Since making The Piano Teacher Huppert has returned to the wounded protagonist in psycho-sexual films, but her Erika towers above them all, even her Oscar-nominated turn in Paul Verhoeven’s Elle.

What exactly Haneke, Huppert and Jelinek are attempting to teach us in The Piano Teacher is up to the viewer to decide. However, despite its potentially lurid subject matter, The Piano Teacher is high art, almost classical in its approach. Haneke continued to explore difficult terrain, especially in his 2009 masterpiece The White Ribbon, yet The Piano Teacher will always mark the moment the director broke through, pushing his dark vision on to a wider audience.