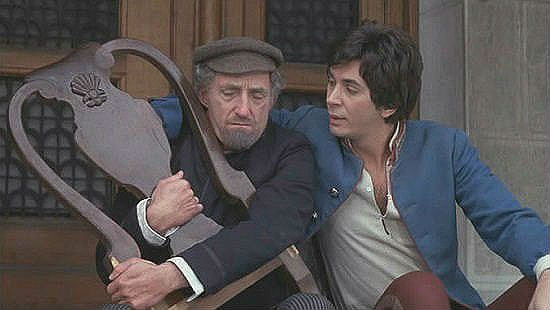 A confident second feature from a filmmaker expanding his capabilities while developing a visual grammar for the classics he’s about to create.

VHS copies of Mel Brooks’ second feature, The Twelve Chairs, abound on Amazon and eBay like tombstones from the last time a company mass-produced it. The movie is currently unavailable on home video (though you can find it on YouTube). There’s an expectation of corporate accessibility because of its creator, yet it seems to be forgotten by its distributors, more so than the forgettable Robin Hood: Men in Tights.

It was 1970, and Brooks had not yet detoured to parodies. Fresh off his Oscar for Best Original Screenplay for The Producers, he fearlessly turned to adapting a satirical Russian novel as his next project. The USSR represented a unifying boogieman to American interests, but whether there was demand for a comedy set in the early days of the Soviet Union was a question no one bothered to ask until Brooks. So he wrote his adaptation and headed off to Yugoslavia to make his new feature. What he returned with is one of his best films.

Set in 1927, the story concerns Ippolit Vorobyaninov (Ron Moody), a former aristocrat of Imperial Russia turned penniless bureaucrat by communism. He is summoned to the deathbed of his mother-in-law, who reveals that a fortune in jewels was hidden in one of the 12 ornate chairs in their family’s old dining room set. He has but to find the chairs and the restoration of his old life awaits. But he is not alone in this pursuit. Father Fyodor (Dom DeLuise), the local Russian Orthodox priest, heard the mother-in-law’s confession while administering Last Rites. The prospect of wealth is too tempting, so after a quick shave and wardrobe change, the good father leaves the village in search of the chairs.

Vorobyaninov gains a partner when local conman, Ostap Bender (Frank Langella), manipulates his way into the adventure. The chairs were confiscated for the people after the Russian Revolution and the set broken up, forcing the two men on a countrywide journey to find the jewels. Early on, Bender employs his talent for impersonating bureaucrats to send Father Fyodor to Siberia on a journey of his own, but fate brings the fortune hunters together for a semi-climatic chase. One by one the chairs are shattered until there is only one left in a newly opened rec house for railroad workers. After closing hours, Vorobyaninov and Bender stand over the chair, waiting to rip open the cushion and take the jewels they assume they’ll find.

The Producers garnered Brooks a host of new fans in Hollywood who would want to work with him. No less a talent than Peter Sellers wanted the role of Vorobyaninov, but scheduling never made it possible. Instead that role went to Ron Moody, best known for his work as Fagin in the film adaptation of Oliver!. For the part of the young conman Ostap Bender, Brooks cast Frank Langella, a dashing young theatrical castmate of his wife, Anne Bancroft, in his first feature film role. And for the role of Father Fyodor, Brooks cast Dom DeLuise in the first of their many collaborations. There was no actor in the 70s as funny as DeLuise, and every moment he has onscreen is a delight. Moody and Langella form a similar bond to that of Zero Mostel and Gene Wilder, their predecessors in male friendship from Brooks’ first film. The dynamics are flipped this time around. Young Bender is the con and the older Vorobyaninov is less experienced in the world. This sort of close male bond will be a theme that Brooks continuously examines throughout his film career.

Brooks went to Yugoslavia because the country gave the production a sweetheart deal. The director had all the workers and support he needed. The country was at his disposal and he took advantage of it. Comedies are rarely afforded the budget for a sense of epic grandeur, but Brooks takes advantage of the opportunity to defy that convention. The film centers on an intimate relationship between two men, but it often has the majesty of a David Lean epic. Budget restraints forced austerity on The Producers, but here Brooks shows his abilities as a serious filmmaker who know how to make use of a bigger budget.

But the film’s most endearing quality is its wildly varied humor. Langella and Moody engage in battles of wit and verbiage while DeLuise is as gifted a physical comedian as ever existed. Brooks also delivers several homages to Warner Bros. cartoons and some of the great gags of silent cinema. All the comedy stops twice in the film so Moody and Langella can perform a serious moment. This tonal shift is effective at highlighting the actors, and one of Brooks’ many strokes of genius with this film. It is a confident second feature from a filmmaker expanding his capabilities while developing a visual grammar for the classics he’s about to create.