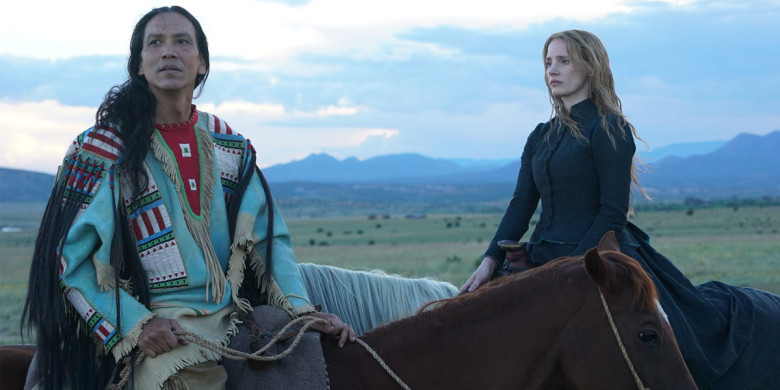 A strong film made from a weak premise that it cannot overcome, no matter how powerful the pedigree behind and in front of the camera.

Can a film be well performed, beautifully shot, passionately written and competently directed, but still be an absolute bore? In director Susanna White’s Woman Walks Ahead, that appears to be the case. This is a strong film made from a weak premise that it cannot overcome, no matter how powerful the pedigree behind and in front of the camera.

Perennial prestige actress Jessica Chastain stars as Caroline Weldon, a portrait artist from 1890s Brooklyn who travels to Dakota to paint Sitting Bull (Michael Greyeyes). Because this is a historical drama and not a charming mumblecore film masquerading as a period piece, they do not meet-cute and fall in love. Instead, Weldon’s interactions with the legendary Native American leader lead to her becoming more sympathetic to the plight of his people, becoming an active advocate for their cause, and rubbing wrong the military men who consider her advocacy to be seditious. This includes Sam Rockwell as a less stupid version of his character from Three Billboards and a truly stirring performance from Bill Camp as General Cook.

The script from Steven Knight takes a minute to get going, but once Weldon meets Sitting Bull, the movie comes alive, largely thanks to Greyeyes and his palpable chemistry with Chastain. But as the film strays from their odd couple interactions and into heavy-handed history lesson territory, it becomes harder and harder to stomach. It’s not that Sitting Bull’s story isn’t an important one. The plight of Native Americans in this country’s sordid, fucked-up history is always relevant and worth exploring onscreen. It’s just that this film is barely historically accurate and positions its narrative less about the Sioux and the treaty talks that led to Wounded Knee and far more about Weldon and what it means to be a good ally.

That throughline makes perfect sense for Chastain to be excited by. In today’s Hollywood landscape, it’s clear she takes being an ally very seriously, so the film itself doesn’t suffer from quite the same “white savior” complex many of its ilk tend to. It’s just that, well, this type of story is just not that interesting. No matter how delicately composed the end result is, any movie that positions a white protagonist at the center of a story of a marginalized people is still ultimately going to be self-congratulatory bullshit designed to make liberal moviegoers feel better about themselves.

And that’s a real shame! Because everyone in this movie does a great job with their piece of the puzzle. White frames the vistas of the countryside with grace and Greyeyes is far and away the most charming and effective performance of 2018 thus far, but that performance is sullied by being trapped inside a movie so otherwise dull and unsurprising.

This reviewer was mostly joking earlier about the mumblecore romance, but honestly, even that would be a preferable cinematic experience to another in a long line of repetitive awards-bait flicks about how sad white people get when they interact with things non-whites deal with all the time. Why are we still making movies like this?