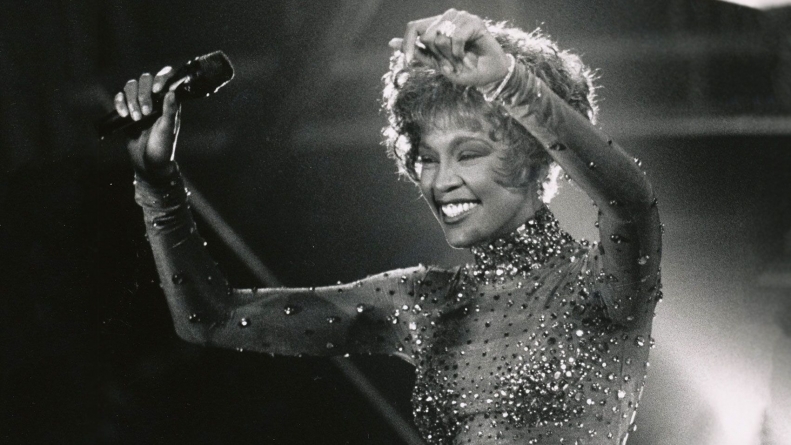 Macdonald paints a picture of Whitney Houston as a complicated human being, powerful but vulnerable, driven but distracted, loving but distrustful.

Director Kevin Macdonald has a deft hand for tragedy. His 1999 documentary One Day in September, which won him an Oscar, tells the bleak story of the athletes murdered at the 1972 Olympic Games in Munich. His best-known narrative feature, The Last King of Scotland, is a biopic of the violent Ugandan dictator Idi Amin. It speaks to the depth of feeling that friends, family and fans alike had for Whitney Houston that her story needs a filmmaker like Macdonald to capture its heartbreaking trajectory. In Whitney, Macdonald assembles footage of the singer’s successes, but the footage that strikes the hardest turn this profile into a compelling tragedy.

Though Whitney tells a relatively complete story, Macdonald is wise to avoid rehashing his subjects most famous moments. The filmmakers are more interested in expressing who Whitney Houston was as a person. In relaying this, Macdonald coaxes some revelations out of the interviews. But even the biggest shockers are devastating rather than surprising. Houston’s relationship with her female assistant, Robyn Crawford, was apparently romantic, though family and society forbade it. It is also disclosed that Houston was abused by a family member at a young age. Macdonald thankfully resists psychologizing, but the film insinuates that the abuse and the ill-fated love story both pushed Houston towards drugs and her unhealthy relationship with her husband, Bobby Brown.

Macdonald paints a picture of Whitney Houston as a complicated human being, powerful but vulnerable, driven but distracted, loving but distrustful. However, in showing this side of Houston, Macdonald frequently focuses on the negative. While it makes for an affecting drama, it is almost absurdly painful to watch at times. Outside of the typical milestones of triumph and success, there are opportunities for levity that Macdonald doesn’t take. For example, anecdotes about the singer’s dislike of Paula Abdul revealed that she could be jealous and judgmental to a humorous degree.

Whitney benefits greatly from the participation of many of Houston’s family and friends. This is a case of Macdonald doing his homework, and apparently hours upon hours of footage were left on the cutting room floor. Seeing the sadness of Houston’s mother set against the delusion of her widower (who insists that drugs played no part in the singer’s life) is powerful, and what is even more striking is the devotion that Houston’s family and friends still have to her and, by extension, this project. There is often a sense in documentaries that interviewees either don’t really want to be there or that they are being coached through a conversation. In Whitney, every interview comes across as willing and purposeful.

One particularly impactful reveal is that Houston was close friends with Michael Jackson. The expectation would be that these two stars might get together and party or roll around atop piles of money. Instead, they just liked to sit together in silence. Each knew what the other was going through, particularly as African American musicians who struggled to find acceptance from black and white communities alike. And they were both famous from a very young age. In this sense, Whitney is a tragedy that feels distinctly of our times. Moments showing a young Whitney Houston are almost unbearable, particularly when considered in the context of other scenes expressing how a mixture of fame, religion, drugs, abuse and isolation conspired against the unnaturally talented star. Still, Macdonald’s respect for Houston always shines through. Even though it might focus a bit too much on the sad moments, this is a timely documentary that honors its subject.