Can you imagine a time when vampires were fresh on the big screen? An era before Lestat, Twilight and numerous Dracula films, when the mystery of the undead still surprised and frightened? Vampirism has always been a metaphor for something—Bram Stoker’s original creation very well could have been a cipher for homosexuality—so what happens when a master director such as Carl Theodor Dreyer gets his hands on this sort of material?

Now considered one of cinema’s greatest silent films, Dreyer’s The Passion of Joan of Arc (1928) was not the success the director had hoped. Heavily criticized by the Catholic Church, truncated and chopped up and even banned in Great Britain, Joan of Arc was a commercial flop. Looking for something more accessible, Dreyer turned his attention to Vampyr, his first talkie film. Based on Sheridan Le Fanu’s 1872 collection of stories, In a Glass Darkly, specifically the story “Carmilla,” Dreyer’s take was actually only the third vampire film ever made (after F.W. Murnau’s 1922 Nosferatu and Tod Browning’s Dracula (1931)). However, Vampyr is an experimental film, one with a meandering pace that focuses more on atmosphere than a compelling plot. 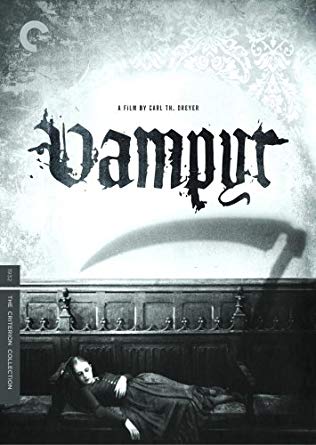 Did you expect Dreyer to make a blockbuster film? While there is a story about a vampire, the film is more concerned with atmosphere and texture than the jump scares and gore we associate with the genre. When the film begins, we meet Allan Gray (financier Baron Nicolas de Gunzburg using the stage name Julian West), a young man who is interested in all things occult. He has arrived at the small French village Courtempierre in search of ghosts and adventure. Almost immediately, Dreyer shows us that something supernatural is afoot in Courtempierre. Allan not only sees shadows without corporeal form moving in the woods, but he also witnesses the spectral murder of one of the town’s wealthy residents.

As Allan slowly learns that a vampire is behind the evildoing in town, Dreyer shrouds his film in the same austerity we will see in later works such as Ordet and Gertrud while using natural imagery to convey horror just like he did in Day of Wrath. Ominous fog billows through the woods while unsettling noises echo in from the distance. It is a world of perpetual sunset, a place where spirits and poltergeists play in the gloom. Allan soon learns that the vampire is actually Marguerite Chopin (Henriette Gérard), and that she is responsible for the deaths of numerous people in the town.

Unlike Le Fanu’s story, which has elements of lesbianism at its core, Dreyer’s film is something more austere and less plot-driven. In some instances, it is almost impossible to follow. Sometimes it feels like Dreyer is presenting us with two worlds, the corporeal and the spiritual. When the film debuted in Berlin, crowds booed and jeered. Many years later, Vampyr is considered one of Dreyer’s best films. While it doesn’t have the emotional punch of some of his masterworks, it shows a master dabbling in a genre that was outside his comfort zone. Rather than conform to the tropes of a horror movie, Dreyer made a vampire film that conformed to his aesthetic and preoccupations.