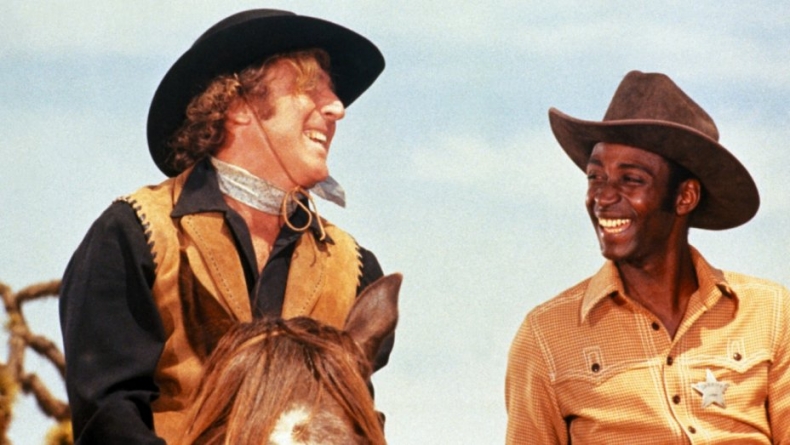 There are plenty of gems in Mel Brooks’ filmography, but Blazing Saddles will never be topped.

There’s a scene in Mel Brooks’ phenomenal career highpoint, Blazing Saddles—which, mind you, is the funniest film ever produced—where Harvey Korman’s Hedley “It’s Hedley, Not Hedy” Lamarr is communicating through a window to a hangman (Robert Ridgely) below who is about to execute a man in a wheelchair. The scene is already ridiculous enough, but as the conversation concludes and Hedley withdraws from the window, he bumps the back of his head. It’s a simple gag, but Korman’s reaction is still quite funny and the act as a whole is evident of Mel Brooks’ comedic philosophy, one which has been relevant throughout his career but reaches its zenith with Blazing Saddles—in short, do anything for a laugh.

Brooks’ absurdist western is the perfect example of this mindset, as it never lifts its foot off the gas pedal even once. Throughout its duration, the film zips back and forth between slapstick, surrealism and snappy, fast-paced dialogue that would leave Howard Hawks beaming. Blazing Saddles time-travels to the past and embodies the laugh-out-loud spirit of a mid-nineteenth-century screwball and even channels the performance-based power of silent cinema, right down to the pie fight during the film’s uniquely bonkers climax.

Brooks seizes every opportunity for a punchline, sight gag or physical buffoonery in Blazing Saddles. There’s a scene where Brooks himself, playing the governor of Rock Ridge, is simply bringing a pen back and forth, towards and away from his nose during one of Korman’s monologues. Why is he doing it? Because he thought it’d be funny, and damn it all if it isn’t one of the film’s million sight gags that perfectly nails its intentions. To watch Blazing Saddles is to be basked in pure silliness, its particular, irreverent style paving the way for comedic artists today like Eric Andre, movies like Wet Hot American Summer, shows like “Community” and anything on Cartoon Network’s Adult Swim and even influencing many of Brooks’ contemporaries, such as David Zucker.

Perhaps the most endearing quality of Blazing Saddles is that it chooses no individual targets in its comedic pursuits—everyone is fair game. All creeds and colors get lampooned throughout the film, while topics like racism and politics are skewered to resemble a kabob of social spoofing that eventually transforms into commentary. Certainly bold for its time, the film’s edgy jokes and frequent use of the N-word were arguably revolutionary for 1974. Blazing Saddles is an undeniably smart film, completely aware of every button it is pushing, but it’s also quite inclusive in its humor. The laughter it produces is incredibly inviting for all, because everybody is in its crosshairs. It lets you make fun of so much, but it understands that sometimes it’s equally as enjoyable to make fun of yourself.

There are plenty of gems in Mel Brooks’ filmography, but Blazing Saddles will never be topped. Right up there with Hawks’ His Girl Friday, Chaplin’s The Gold Rush and Sturges’ eclectic body of work, the film is a landmark in the comedic artform. Without it, comedic culture would not be what it is today.