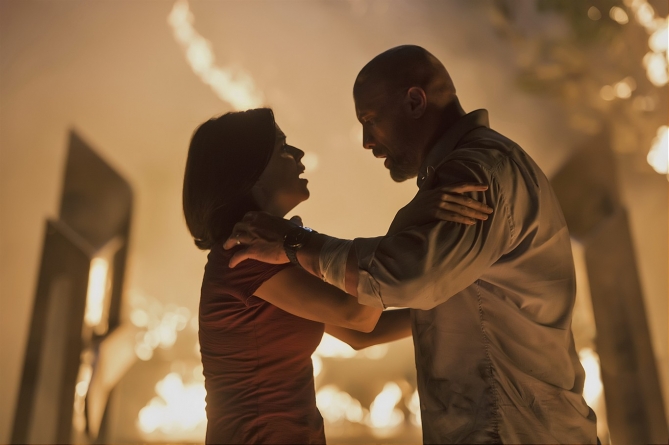 Only in a marketplace crowded with superhero movies and franchise fare could a movie about The Rock saving his family from a giant building on fire feel like a breath of fresh air.

Only in a marketplace crowded with superhero movies and franchise fare could a movie about The Rock saving his family from a giant building on fire feel like a breath of fresh air. In Skyscraper, the second chapter in the ongoing bromance between Dwayne Johnson and Central Intelligence writer/director Rawson Marshall Thurber, a simple yet absurd premise gives way to one of the most satisfying, if low-aiming, films of the summer.

After these two films, Thurber and Johnson are reteaming for a mysterious tentpole picture called Red Notice that’s going to net both men a metric fuckton of money. They basically sold that upcoming project with an idea on a napkin and a pie-chart for how they intend to divvy up the profits. But it makes perfect sense that they’re in it for the long haul together. Thurber, who broke in with the semi-decent laffer Dodgeball, better than any other collaborators, understands The Rock, both as a person as a pop cultural entity, and is able to craft high concept loglines whose execution would only be possible with Johnson in the leading role.

For Skyscraper, Johnson plays Will Sawyer, a former FBI agent who lost his squad and one of his legs over a miscalculation with a tense hostage situation. In recovering from all of that loss he met naval surgeon Sarah (Neve Campbell), who stitched him back together. They got married and had a pair of adorable kids and now Sawyer is interviewing for a security consultant position at a Hong Kong building called “The Pearl,” the largest skyscraper in the world. It’s an uninsurable piece of architecture for what should be obvious reasons, but just in case anyone is curious, a mysterious group of criminals steals the biometrically-secured tablet that controls The Pearl’s safety measures, turning it into a super tall disaster movie set.

Look, you know if there’s a movie about a big ass building, it’s gonna catch fire and The Rock will end up climbing it to save his family. That’s a given. But what makes Skyscraper so special is the balance with which Thurber constructs this absurdist fantasy. The set-up for all of the second half’s many callbacks is laid out with a semaphore conductor’s taste for subtlety, so most of the fun comes from a kind of anti-suspense. Instead of keeping the audience on their toes, not knowing what will come next, Thurber primes the pump, gleefully telegraphing future set pieces to whet the audience’s appetite while they’re just being introduced to cookie cutter villains and extremely friendly associates we know by their casting will turn out to be traitorous scum.

The action is suitably implausible, but competently framed (and shot by cinematographer Robert Elswit), but what makes the film so successful is how much we, as an audience, have come to love and believe in The Rock. Nothing Johnson does is too ridiculous in the film because we pay to see this superhuman hunk of muscle mass do the impossible. His sweet dad-who-will-do-anything-to-protect-his-family would be rote by now if he wasn’t so goddamn good at it. There’s a moment where he holds up a bridge with his bare hands while standing on it and even though the entire auditorium was laughing at how over the top this moment was, not a single one of them didn’t buy it as it was happening.

While The Rock is undoubtedly the film’s star and beating heart, special mention must go out to Neve Campbell as his wife Sarah, a character who is written pretty thinly, but comes alive as his equal, and not just a damsel in distress. One would never have guessed their chemistry would be so believable, but her presence and matter-of-fact badassness really stands out in a genre where wives and love interests exist just to scream and be captured.

Surely, the longer one thinks about Skyscraper and how many logic rules it bends and how corny the film’s MacGuffin is, yeah, it’s an imperfect film. It’s not going to win any awards that don’t have “people’s choice” somewhere in the title anytime soon. But it’s a big, broad and effective movie that doesn’t try to sell you on seven planned sequels or any accompanying toys or social media games. It’s a blunt force instrument of popcorn fluff with genuine heart and a bevy of crowd pleasing moments. It’s the fucking reason The Rock is the biggest movie star on the planet and why we should keep it that way at all costs.