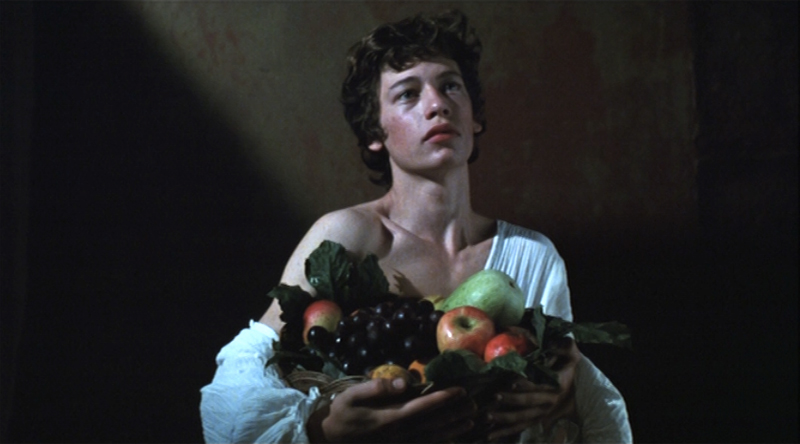 Caravaggio is easy to appreciate but difficult to love, as it appeals to the senses but also rejects easy consumption.

Derek Jarman’s Caravaggio is easy to appreciate but difficult to love, as it appeals to the senses but also rejects easy consumption. The film, a fictional biopic of the famed Baroque painter Michelangelo Merisi da Caravaggio, is, on the surface, just that: a biography of a famed artist. But Jarman, who throughout his too-short career tried many different ways of marrying his classical aesthetic tastes with an interest in nontraditional storytelling, was perhaps most successful in that endeavor with Caravaggio; the film chooses to tell painter’s story by creating the scenes of his paintings rather than faithfully recreating his life. This allows Jarman to create beautiful, lush imagery (a skill he honed as a production designer for Ken Russell) while also including themes that he touched upon in previous and later work: homosexual desire, the relationship between artist and subject (and patron and artist) and the mingling of sex and death.

Watching Caravaggio today, however, offers even greater pleasures than perhaps ever before. Released in 1986, Caravaggio was the first film of two actors who are arguably only now reaching their prime. The first is Sean Bean, whose craggy beauty has been with him since his debut over thirty years ago. Bean’s presence is especially satisfying given how meme-worthy his frequent film and television deaths have become. When his character Ranuccio dies in Caravaggio, his throat slit after the artist discovers that Ranuccio, his lover, has murdered his other lover, Lena, it is the beginning of a long, lustrous line of now-legendary onscreen deaths.

The second debut actor, who played Lena, is none other than Tilda Swinton, who would go on to be Jarman’s most-trusted collaborator. Just as Jarman seemed to predict – or even establish – Bean’s knack for duplicity and death, Jarman recognized and championed Swinton’s androgynous beauty from the very start of her career. Swinton’s later work, which has seen her formidably play men, women, neither and both, may not have been possible had Jarman not identified her unique skills.

These two debuts signal more than just good ammunition for a round of six degrees of separation. They show the meticulous intelligence of Jarman’s still-underappreciated filmmaking. His marriage of keen eye and curious brain allowed him to identify the unique talents of his subjects. This is evident, too, in the casting of Nigel Terry as the titular Caravaggio. Terry, a beautiful but somewhat vague performer, serves as the perfect canvas for Jarman’s vision of Caravaggio.

Jarman is often called an “experimental” filmmaker, which is reductive as it suggests a lack of vision on his part. Jarman is less experimental than he is bold and unconstrained. When he includes a 16th century clergyman using a 20th century calculator, Jarman is both jarring his audience in the same way that Russell, David Lynch and contemporary filmmakers like David Robert Mitchell do. He is also using the image to comment on the corruption of both the church and the world of artistic patronage – and, by extension, the increasingly political world of film finance. There are many examples of this in Caravaggio and all are meticulous rather than experimental.

Finally, as queer filmmaking continues to spread it wings, it is vital to remember how revolutionary Jarman was. His work, at times kept out of even arthouses, helped set the foundation for an industry that now sees blockbusters with queer characters and queer Best Picture winners. His representation of homosexuality was more complicated than the majority of queer films today, thirty years after his prime. He refused to supply an easy definition for desire and as a result his films are still satisfying and surprising today, and Caravaggio may be the best one.