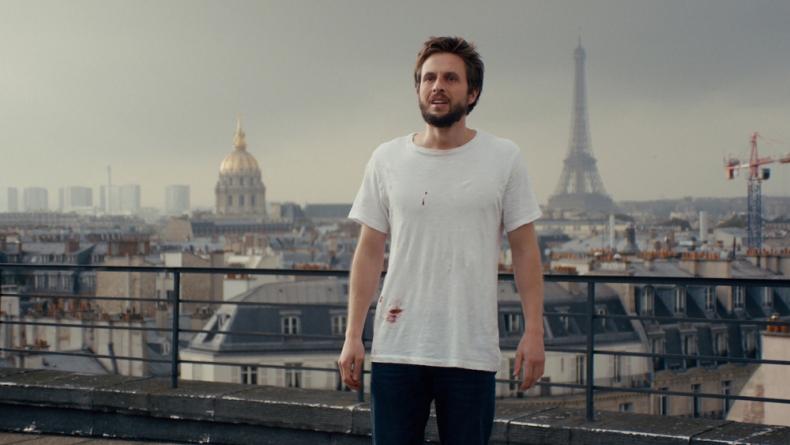 The Night Eats the World stakes out a unique place in a landscape where novelty is elusive.

Zombie films are a well-trod genre in which innovation has become increasingly rare. To be fair, with two popular zombie-themed television series currently airing (not to mention the hundreds of books, graphic novels and even songs on the subject), even the furthest-fetched of zombie innovations have been covered. For every 28 Days Later and Shaun of the Dead there seem to be twice as many I Am Legends and World War Zs.

So, right off the bat, writer-director Dominique Rocher’s The Night Eats the World stakes out a unique place in a landscape where novelty is elusive. This is especially impressive considering that this is Rocher’s debut feature-length film. The film’s individuality comes not from a gimmick like “fast zombies!” or “underwater zombies!” but from the very core of the director’s approach. This zombie movie is as much a meditation on isolation and depression as it is a film about the walking dead, and this combination proves to be a comfortable fit.

It opens as Sam (Anders Danielsen Lie) is attending a party, where he falls asleep. He wakes to find the city overrun with the shambling, mindless, gore-slicked dead. Sam waits out this crisis in an apartment building, where he silently observes the city from its high windows and occasionally plays music. The melancholy cinematography and score suit Sam’s isolation, which in itself is an uncomfortable allegory for how an introvert might feel in the throes of a post-party hangover.

However, the strong concept isn’t enough to keep The Night Eats the World afloat. In fact, in the absence of a strong script, the concept ends up crippling the film by the end. Though we are in a golden age of slow-burn, vérité-style horror, it is still inexcusable for a horror film to be boring. The grey melancholy of the film’s early moments feels less intentional when it doesn’t build to anything substantial.

The most interesting thing that does happen is Sam’s growing fascination with a particularly expressive zombie, played by Holy Motors’ Denis Lavant. But Rocher fails to build here as well, just as he does with Sam’s occasional musical forays and an appearance by talented Iranian actress Golshifteh Farahani. You would think that the presence of another human would add some excitement to the plot, but instead it simply serves as an excuse to give Sam some awkward dialogue that is at best unnecessary and worst clichéd.

Although it never really builds on its concept, The Night Eats the World has enough going for it to make it worthwhile. Rocher subverts expectations by making an achingly slow zombie film, in direct contrast to recent, action-heavy “fast zombie” films. He also wisely sets the action in Paris, and never has the romantic, vital city looked colder or lonelier. Even though he doesn’t take full advantage, Dominique Rocher has made something unique out of a seemingly played-out genre, and one looks forward to what he might come up with next.