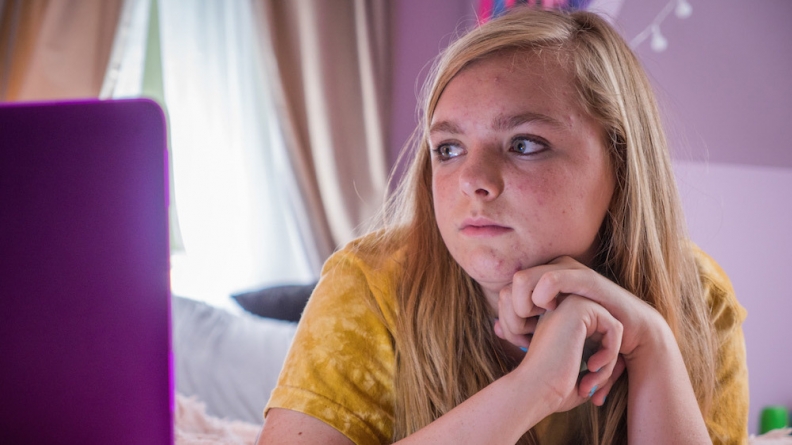 Burnham’s biggest gift here as a storyteller is his compassion and refusal to pretend the differences between today’s kids and the rest of us is anything other than trivial.

Stand-up comic/former YouTube personality Bo Burnham follows in the footsteps of many a comedian-auteur with his writing and directorial debut Eighth Grade. But where many funnymen broke through with Woody Allen-aping author-insert rom-coms, Burnham has crafted an of-the-moment coming of age tale as funny as it is painful to experience.

The film follows newcomer Elsie Fisher as Kayla, an eighth grader navigating her way through the last week of middle school. Kayla maintains a YouTube channel offering tips on gaining confidence, making friends and being yourself, but the vast chasm between the self she presents on camera versus the one we see in her private moments is a familiar one. She lives with her single father Mark (played with aging, Gen-X charm by Kicking & Screaming’s Josh Hamilton) and has zero friends, winning a superlative award for “Most Quiet.” Eighth Grade then, sticks with her individual perspective to paint a portrait of what it’s like to be on the eve of high school in 2018.

But this isn’t the typical millennial bashing hand wringing of most films that vividly depict life on social media. There’s something haunting and hypnotic to the way Burnham frames Kayla laying on her side and endlessly scrolling Tumblr while Enya plays, but it doesn’t feel like critique. Burnham isn’t interested in actively criticizing today’s youth for being glued to their phones or for curating digital tulpas. For one, adults do this, too. But for another, this inexorable link between technology and everyday life is treated as a matter of fact. Much of the film’s plot details revolve around Snapchat and Instagram, but that’s only because it would be weird to pretend that’s not where youths spend a majority of their time.

The film works so well because everyone remembers being in eighth grade. It’s the same fucked up snapshot of adolescent hell, whether or not you had an iPhone or your teachers tried to say words like “lit.” The memes and references are just set dressing for an accurate time capsule of modern teenage life. What makes it special is that it so honestly hews to Kayla’s perspective that moments that wouldn’t be dramatic in a different kind of film feel as life or death as they did when we were young.

Seriously, no horror movie in the last few years metes out the pure dread and suspense Burnham distills in Kayla’s persistent awkwardness. There are moments in Eighth Grade where this reviewer had to cover his eyes and look away from the screen, using the free hand to hold his gut at how painful and stomach churning the second-hand embarrassment felt. That it’s still one of the funniest films of the year feels like a miracle, given that the majority of the runtime hurts so much.

But being a snapshot, it’s able to end on a hopeful note. One of the film’s final scenes is easily its sweetest, but taken out of context, it would be a borderline insufferable piece of cringe. It’s just that, after everything Kayla goes through in the film’s tight runtime, she’s earned this goofy little moment of peace.

Eighth Grade is ultimately a sweet, uplifting bit of cinema, thanks largely to Fisher’s performance. She’s vulnerable, smart, and charming, able to ease the audience into moments of disquiet through empathy before taking them on an exhausting journey of seeing life through her eyes. We need more movies about the youth that don’t condescend to them or act like their problems are so foreign from the ones we encountered at their age. Burnham’s biggest gift here as a storyteller is his compassion and refusal to pretend the differences between today’s kids and the rest of us is anything other than trivial.