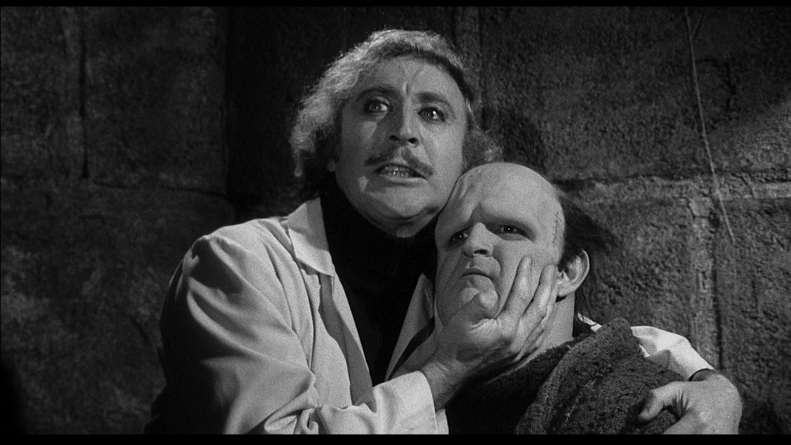 This is Brooks’ fourth film as a director and there is a real sense of him settling into his groove.

Or is it Frankensteen? According to legend – the source of the legend being the director himself – Mel Brooks was terrified of the monster when, as a boy, he saw James Whale’s film upon its release. Decades later, he noticed Wilder working out an idea on a legal pad during the actor’s downtime on the set of Blazing Saddles. When queried, Wilder pitched the idea of Frederick Frankenstein, the grandson of Victor Frankenstein, who is so ashamed of the family name he willfully mispronounces it while pursuing his own career in science. Frederick is lured back to Transylvania to continue his grandfather’s work. Wilder wanted to collaborate with Brooks on this endeavor and after a $57 retainer exchanged hands their new partnership was struck. The film that so terrified Brooks as a boy that he begged his mother to close the windows of their apartment in Brooklyn so the monster could not get in and eat him was about to guide Brooks through what he still considers his finest work.

The story of the making of Young Frankenstein offers very little drama or gossip. The biggest hurdle Brooks and Wilder faced when shopping the film around the studios was their insistence that the comedy be filmed in black and white. Black and white films were for nostalgia and late-night hours on television. This was the ‘70s. The technology for making color films improved yearly. To defy industry standard was madness and studio after studio begged Brooks to reconsider, but he and Wilder refused. Finally, the project reached the desk of Alan Ladd, Jr., the son of a movie star who ran Twentieth Century Fox. Ladd was an executive who didn’t mind taking risks when they seemed appropriate, so he gave a green light to Young Frankenstein much in the same way he would another little film everyone else passed on called Star Wars.

If parodies don’t give their source materials new life, they offer layers to those curious enough to see what the laughs are based on. Brooks and Wilder are incredibly faithful to Whale’s films. Collecting props wasn’t a big business in the first decades of film. What couldn’t be repurposed was deemed disposable and free to anyone willing to take it. This was true of the bulbous lab equipment from Frankenstein. Brooks tracked down the original props once he learned they had survived and put them in the film. As if building his own connective totem, Wilder seems to have built his character around Colin Clive’s most famous moment. Playing Victor Frankenstein for Whale, Clive bellows “It’s alive! It’s alive!” Wilder’s Frederick is built around that moment. He is as manic as all Frankensteins, a pendulum of highs and lows swayed by his brilliance.

This is Brooks’ fourth film as a director and there is a real sense of him settling into his groove. That there was a debate about the black and white filmstock seems ludicrous in retrospect. The lack of color adds so much to the mood and tone of the film, allowing the comedy to play off the spooky elements of the subtle horror tropes of the ‘30s. Wilder is surrounded by a cast of brilliant comic actors including Marty Feldman as Igor, Teri Garr as the beautiful lab assistant Inga, Madeline Kahn as Elizabeth and Cloris Leachman as the scene-stealing Frau Blucher. But no Frankenstein film is complete without its monster and Peter Boyle makes Karloff proud with his performance. His scene with Gene Hackman, who plays the blind man in the cabin, is lifted directly from Bride of Frankenstein, but instead of the blind man teaching the monster to speak and read until the day some hunters discover them, Hackman simply abuses Boyle throughout the scene. Both men were known for drama at the time, but their scene together is possibly the funniest in the film.

Young Frankenstein is the clearest indicator of what Brooks is about to make of his directing career. The sheer inventiveness of The 12 Chairs and the utter anarchy of Blazing Saddles has here settled into a bawdy comic sensibility that always pushes for the laugh. And laugh they did on the set of Young Frankenstein, so much so that Wilder was constantly ruining takes. Legend has it – again a legend originated by Brooks – that test audiences were subjected to a two-and-a-half-hour cut of the movie. Jokes were pitched on the set all the time and Brooks not only filmed them all but appears to have put them in his initial edit. He promised those audiences that he would trim an hour and make a classic and was true to his word.

1974 was a very good year for Mel Brooks. It began with Blazing Saddles and ended with Young Frankenstein, the first and fourth highest grossing films of the year. He went from a madcap character people liked having lunch with to a comic force in the movie business who no one could say no to.