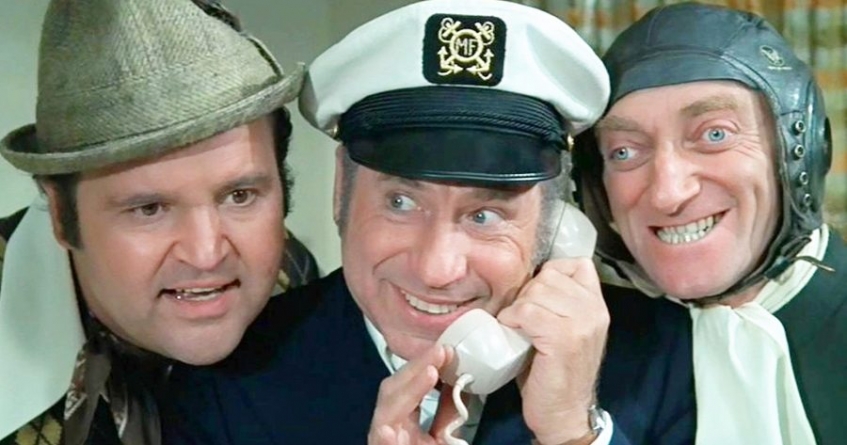 Silent film has always coursed through the veins of Brooks’ cinematic output, which is why the eventual release of Silent Movie came as no surprise to anyone paying attention to his comedic tendencies.

Silent cinema has always been an influence on the filmography of Mel Brooks. Many of his most notable films—such as 1974’s one-two punch of Blazing Saddles and Young Frankenstein—feature long sequences and specialized gags that rely exclusively on the impact of physical, wordless humor. Hell, even Blazing Saddles ends with a pie fight that aims to rival Laurel & Hardy’s 1927 The Battle of the Century.

Silent film has always coursed through the veins of Brooks’ cinematic output, which is why the eventual release of 1976’s Silent Movie came as no surprise to anyone paying attention to his comedic tendencies. In many ways, it feels like the movie he was destined to make.

The film itself is a celebration of what silent cinema can do, while also twisting the conventions of the genre through irreverent methods that only Brooks could pull off. Sound plays a key role in the humor through both absence and inclusion, such as the famous “Non!” spoken by noted mime, Marcel Marceau—the only spoken line in the entire film.

Even the score is used for laughs, with a New York City skyline accompanied by the song “San Francisco.” That is, until the background musicians realize their playing the wrong song and scramble to remedy the mistake. These sound gags, accompanied by both slapstick and pantomime, help propel Silent Movie to something that is at once a throwback yet still feels entirely new.

But arguably the film’s boldest contribution to comedy is how savagely it criticizes the film industry that Brooks himself was a part of. From star-making sellouts to corporate Hollywood, Silent Movie skewers the system through any method it can find in its arsenal.
The plot follows Brooks taking on his first leading role in one of his films, playing Mel Funn—a fictionalized version of himself who is looking to make his next great work with Big Picture Studios (a lampooning of the major studios of the day who focused mainly on the star-making commercial quality of their films over artistic merit). This leads Funn to pursue a wide variety of stars in his pursuit of new material, including Anne Bancroft, Burt Reynolds, Liza Minnelli, James Caan and Paul Newman.

So, for starters, Silent Movie blatantly takes an ax to the whorish notions of star-power in Hollywood. It’s a fairly relevant satire even today, where films are not-so-stealthily marketed to specific audiences based on their leading actor or actress (movie theater employees will tell you their woes of dealing with people asking for a ticket to “The Tom Hanks Movie” or “The One with Meryl Streep”).
But perhaps its sharpest knife is plunged into the gut of Hollywood commercialism and industrial takeover of art. It plays on Gulf + Western’s takeover of Paramount Pictures through a fictional entity called “Engulf and Devour Corporation,” which aims to take hold of the film’s Big Picture Studios and turn the already-commercial studio into something that is even more marketable to the masses.

It’s still as applicable as ever. Just ask Disney.