“I think it’s going to be like Easter and Christmas and New Years and your birthday all together, you know!” a blonde girl exclaims at the opening of D.A. Pennebaker’s Monterey Pop (1968) the director’s chronicle of the 1967 Monterey International Pop Festival. “Hearing all the different bands, you know. It’s just, like, I’ve heard a lot of them; but, all at the same time – it’s going to be too much. I mean, the vibrations are just going to be floating everywhere!”

As America ushered in the Summer of Love, rock music pushed at the confines of its format, moving away from the baby-faced innocence of acts such as Paul Anka and Ricky Nelson by incorporating elements of soul, jazz, psych and other non-pop conventions. Thanks to the Beach Boys and the Beatles, rock ‘n’ roll was no longer the music of white-boy surfers and their Barbie doll girlfriends. Instead, the roiling sexuality of the Rolling Stones and the hip literacy of Bob Dylan whisked popular music away from the safe prescription created by the record companies towards something more exciting and dangerous. 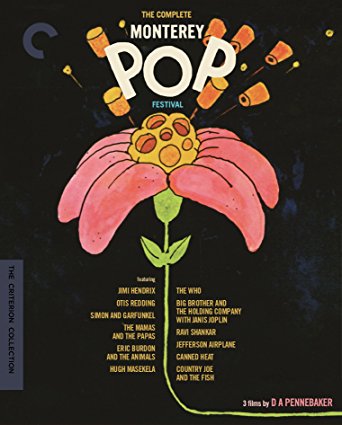 Alternating between crowd shots and performances by legends such as Janis Joplin, Otis Redding and Jimi Hendrix, Monterey Pop and Pennebaker tell their narrative by being letting it unfold naturally. Much of the audience we saw is full of wide-eyed wonder, much like the girl in the opening quote above. Remember, music festivals aren’t a dime-a-dozen corrals where corporations gouge concertgoers like they do today. Cynicism seems absent, especially at a festival with a slogan like “Music, Love and Flowers.” Not that the kids didn’t have a reason to cynical with the Vietnam War and the struggle for Civil Rights ripping apart the country.

Though the festival lasted four days, Pennebaker decided that only the most interesting acts would make his film, which run just shy of a scant 80 minutes. So while Joplin, Jefferson Airplane and Redding made the cut, many more acts such as the Steve Miller Band, the Grateful Dead and Buffalo Springfield only appear in outtakes. Pennebaker also does not edit the film in chronological order. Instead, he frontloads the film with more traditional pop acts such as the Mamas and the Papas and Simon and Garfunkel, before pushing on to what he believed to be the future of music from Redding to Jimi Hendrix. Monterey Pop ends on an extended raga by Ravi Shankar, a mesmerizing afternoon performance that shows an exhausted audience seduced by the music’s droning loops.

It is impossible to watch a film such as Monterey Pop and avoid the crush of time. It is painful to think of all these young, beautiful, hopeful faces are now likely weathered and tired, or even deceased. And while we cannot know the fates that awaited the nameless concertgoers, we do know that many of major acts passed on into legend, many shortly after the festival. Joplin, Redding, Hendrix, Keith Moon, John Entwistle, Brian Jones, John Phillips, Cass Elliot, Denny Doherty and many more have already died. Redding, killed in a plane crash, died before the film premiered, giving his performance of “I’ve Been Loving You Too Long” a special resonance.

So why does Monterey Pop still resonate 50 years later, especially with music documentaries so common? Mainly, it captures a time and place where legends of rock signaled the possibility for change, for peace. It’s a long-gone era symbolized by a beautiful girl with Lennon glasses, flowers in her hair, flashing the peace sign with innocent abandon. It’s the genesis and dissipation of a dream, one that would soon go up in flames like Jimi Hendrix’s guitar did that June evening, more than 50 years ago.