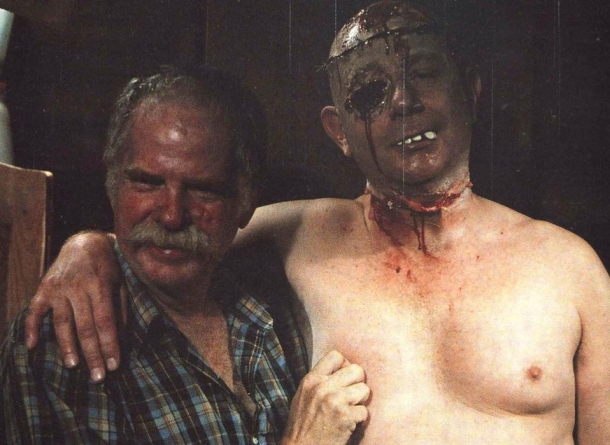 Even this seemingly inconsequential mutt of a film has an unmistakable and bittersweet personal touch.

Considered a late-career blip in the filmography of a director frequently counted as among the worst ever, the 1987 horror-comedy Monstrosity, now streaming on Amazon Prime, seems a far cry from the grindhouse horrors that Andy Milligan made in the ‘60s and ‘70s. Even biographer Jimmy McDonough, who served as production manager, and for one shot doubled as the cobbled-together monster, wrote in The Ghastly One that the movie lived up to its title and, like the director’s other Hollywood movies, was “somewhat empty at heart.” But despite the absence of most of Milligan’s core repertory company – the actors who stood by his side in the off-off-Broadway demimonde where he cut his dramatic teeth – even this seemingly inconsequential mutt of a film has an unmistakable and bittersweet personal touch.

Like much of Milligan’s work, Monstrosity revolves around one of the most primal and base of human motivations: revenge. Mark (David Homb), a young medical student, is devastated when his girlfriend Ronnie (Audra Marie Ribeiro) is raped by street thugs. Police investigators bring her a book of mugshots in the hospital as she’s recovering from her massive injuries, but before she can identify the culprits, the thugs sneak into her hospital room and kill her, ripping out their pages in the rogues’ gallery before they go. Mark feels helpless against the thugs’ brutal crime spree, but after an investigator slips him copies of the missing portraits, Mark and his scrappy pre-med friends hatch a plan to take discarded body parts, sew them together with limbs from a gorilla that was dismembered by a lawnmower, and create a vigilante Golem to avenge Ronnie’s murder.

It sounds like typical straight-to-video ‘80s fare, and most of the young actors don’t have the flair of Milligan’s loyal New York players. But there’s a telling exception to the mostly undistinguished cast. The patchwork Golem with the blazing-red fright wig is played by longtime Milligan collaborator Hal Borske – a clear authorial stand in. Does Milligan feel that he himself is a damaged monster, pieced together from discarded parts? When the misshapen beast, whom they call Frankie (though one of the med students helpfully clarifies that Frankenstein is the name of the doctor, not the monster), comes alive, his first impulse is to hug a teddy bear; this ill-formed creature is an innocent, corrupted by the vengeful ambitions of seemingly clean-cut kids.

Frankie graduates from a stuffed animal to a blow-up doll, but this poorly fabricated being finds an effective foil – and more — in Jamie (Carrie Anita, in her only credited film role), a kind of shaggy Cyndi Lauper figure who’s as goofy and innocent as the monster she loves. Inexplicably, Jamie even has a guardian angel, Angelo (character actor Joel Weiss), whose extended monologues add another layer of strangeness.

Monstrosity doesn’t have a good reputation even among Milligan’s few acolytes, and it’s natural to expect that his urge to create had subsided and his fixations watered down from his grindhouse peak. But from its opening establishing shots of seedy Los Angeles streets, skewed camera angles and such familiar personal buttons as emotional rejection, corrupted innocence, and cruelty, this is still recognizably as the work of a singular gutter auteur. And while Milligan allows Frankie and Jamie to share a tender if bizarre affection for each other, he can’t resist the urge to pull the rug out from under them.

Although tragedy strikes, the movie seems to end on a hopeful note; Frankie is sitting at a bus stop with a bag lady who asks him what he plans to do next. “It’s a big country,” he says. ”I’ve been readin’ and I’ve been thinkin’. Maybe I’ll be like you, Agnes, and just walk around.” The camera pans up to the sky, full of possibility, when a voice calls, “Cut! Print!” It’s a fakeout that looks forward to Abbas Kiarostami’s A Taste of Cherry, 10 years later, but while that arthouse favorite’s epilogue may be there to assure us that its unhappy ending is just for pretend, Milligan’s demonstrates that this rare happy ending is purely make-believe. One couldn’t blame viewers for dismissing Monstrosity as just that; but give it a chance, and it will break your heart.