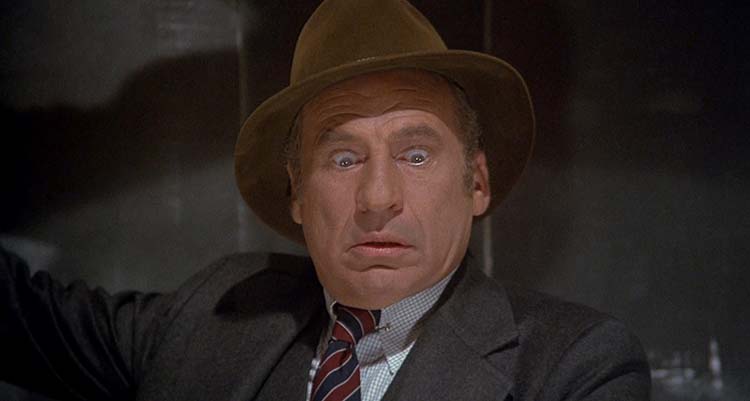 A testament to Brooks’ underappreciated skills as a visual mimic

High Anxiety is Mel Brooks’s most parody-driven feature, the film most reliant not merely on the vibe of other films but specific callbacks to images and plots. A loving tribute to the wrong-man thrillers of Alfred Hitchcock, the film piles on references from the start, introducing psychiatrist Richard Thorndyke (Brooks) at an airport where a screaming woman seems to run at him with a knife à la Psycho, only to be revealed to be gleefully greeting a loved one behind him. Brooks cuts to the heart of Hitchcock and sets his parody in a mental health facility, the Psycho-Neurotic Institute for the Very, Very Nervous, where Thorndyke arrives as the new head. Almost immediately, he must confront sick patients and a suspicious staff along with his own mental phobias, chiefly a severe case of vertigo that his own psychiatrist, Professor Lilloman (Howard Morris) dubs “high anxiety.”

Thorndyke finds himself inadvertently embroiled in a kind of civil war with staffers Dr. Montague (Harvey Korman, replicating his smarmy Blazing Saddles performance) and Nurse Diesel (Cloris Leachman, crossing Miss Danvers with Nurse Ratched). Leachman, as she did in Young Frankenstein, nearly steals the show, wrinkling her face into a noirish grimace and speaking out of the corner of her mouth as if the rest of her face were frozen with Bell’s palsy. Diesel steamrolls over everyone, especially Montague, with whom she has a dom-sub relationship that is explicitly shown but funniest in the squint-eyed, imperious flirtations that imply their affair. This brings out the best in Korman, who is at his zenith when revealing the impotent, begging quality at the heart of his officious figures.

Leachman’s interplay with the rest of the cast carries much of the first half of the film, which is otherwise overly reliant on its references and a watered-down version of Brooks’ usual shtick. Some jokes, like Thorndyke’s assistant, Brophy (Ron Carey), repeatedly attempting to pick up his boss’ large luggage, stretch too far to keep the original laugh but not long enough to become funny again. Some of the nods to Hitchcock’s films are clever (a gag that spoofs Under Capricorn’s elaborate dolly shots around a manor by having the camera crash through a window is exemplary), but many are simply name-checks. Even a centerpiece Psycho gag involving a harried bellhop furiously delivering Thorndyke’s morning paper is poorly sketched, robbing a decent payoff with a bumbling and obvious setup. Some of the responsibility for the flat jokes falls on Brooks’ limited capacity as a leading man. Best suited to the cartoonish supporting roles he’d taken previously, Brooks obviously knows the rhythm of his script but lacks the minute expressions of normalcy that underscored the mania in, say, Gene Wilder’s performances for the filmmaker. Brooks is by no means bad, but he has a tendency to lean in a bit too much on the punchlines, spoiling his wittier parting jokes by hitting them with too much emphasis.

Things pick up considerably when Thorndyke uncovers a conspiracy by the hospital to keep its wealthy patients indefinitely in order to siphon endless money from their families. His attempts to flee Montague and Diesel’s reprisals bring him in contact with a patient’s daughter, Victoria Brisbane (Madeline Kahn). Kahn adds an adrenaline rush to the film just as it threatens to lock into a rut, her fleet comic timing seeming to quicken the pace of the whole movie. Nearly all of the movie’s best scenes involve her: watch how she swiftly progresses through a bit where Thorndyke calls Victoria, only to be strangled by a henchman the second she picks up. Assuming this gagging mystery man to be a pervert, Victoria at first demands he hang up, and maintains her anger even as she starts to recline on her bed and starts to sound more intrigued. As Thorndyke’s gurgles and the henchman’s grunts become more extreme, Victoria grows more and more aroused, but Kahn never overplays it, restraining Victoria to simply tracing her finger over a stuffed animal lasciviously and calmly indicating her interest. Later, in the film’s best gag, Thorndyke and Victoria must slip through airport security under heavy surveillance, and they settle on faking out guards and cops by paradoxically making the biggest scene possible as a squabbling old Jewish couple. The two bicker and gesticulate wildly as everyone looks on helplessly and even when Thorndyke’s pistol sets off a metal detector, the two are so catastrophically irritating that they are let through without a closer inspection.

High Anxiety marked a transition point for Brooks’ movies. Its visual gags show the same attention to detail that defined the hyper-specific quotations of Young Frankenstein and Blazing Saddles, but its comedy shows the filmmaker starting to lose his edge. Brooks becoming his own leading man coincided with a shift where Brooks’ films went from manic, Marx Brothers-esque anarchy to something still quippy but less spontaneous. Brooks still had great work in him, but the dull stretches of this film show the cracks beginning to form. That High Anxiety still emerges as one of Brooks’ strongest features is a testament to his underappreciated skills as a visual mimic in the director’s chair and of the superb supporting cast. And if nothing else, the film makes a better comedy out of Hitchcock’s techniques than the master ever did with his own forays into the genre.