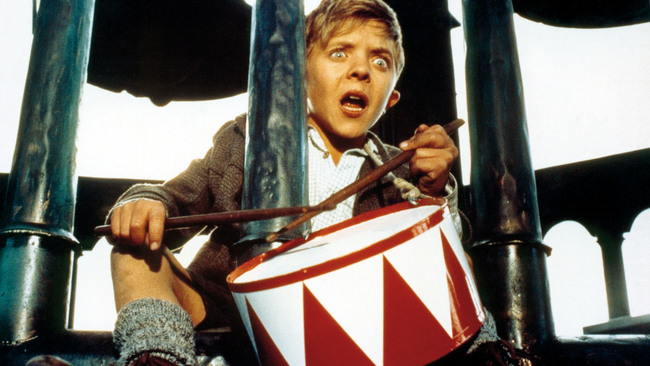 The Tin Drum remains one of the more intriguingly peculiar coming-of-age stories to come out of the late 20th century, one that nimbly weaves between the fantastic and tragic with uncanny aplomb.

When Oskar (David Bennent) tells his life story, he starts before the beginning. The narrator and offbeat protagonist of Volker Schlöndorff’s 1979 film, The Tin Drum, begins his origin story with the conception of his mother. She gets her start when a fugitive on the run from police hides under the many-layered skirts of a Polish peasant woman roasting potatoes in a field, clandestinely getting busy with her under the fabric while she covers for this brash stranger when the cops come nosing around. It’s the first of many unconventional unions throughout this strangely compelling German film adapted from Günter Grass’ 1959 bildungsroman of the same name, its magical realist flourishes and grotesque tangents all taking place against a backdrop of the insidious rise of the Third Reich.

It isn’t the festering Nazism lurking on the fringes of his daily life but rather the ennui and hypocrisy he perceives when observing the adult world that leads Oskar to the decision to halt his physical development at age three and remain a permanent child in stature if not in thought. Oskar has loathed the world from the start. Instilled with an agelessly mature mind even while in utero, Oskar refrains from crawling back into the womb as a newborn only because of his exhausted mother’s beaming promise that one day, when the boy turns three, she will buy him a toy drum. Three years later, he has his treasured tin drum always in hand, and he will resort to violence should anyone attempt to take it from him. Oskar’s childhood and adolescence, filled with lurid and tragic elements, passes by with the little drummer boy remaining a self-described “gnome.”

The film’s effectiveness hinges on the oddly captivating performance of Bennent as Oskar. The actor, 11-years-old at the time, is tasked with physically portraying Oskar from an unborn fetus all the way to physically-stunted adulthood, a transition which Schlöndorff imbues with an otherworldly touch at times. Bennent’s eerie intensity, most often conveyed through haunting, saucer-like eyes, feverish drumming and turbulent outbursts, drives a character whose inherent selfishness is largely eclipsed by the self-absorption of others around him, and the fiercely nationalist delusions of his society at large. Oskar also discovers that his scream can shatter glass. He mostly wields this preternatural ability to protect his beloved drum. But both his scream and drum—in school, and elsewhere, he often uses a drumbeat in place of actual speech—can be used to fantastic ends, such as when his counter-rhythm drummed under the bleachers at a Nazi rally prompts the band to shift from a battle hymn to a waltz, the intense rally breaking out into carefree, impromptu ballroom dancing in one of the film’s more transcendent absurdist sequences.

The tangled sexual relationships throughout the film are used to illustrate how, even with one of history’s greatest evils infiltrating daily life, human beings are prone to engage in impulsive and tawdry behavior regardless of the circumstances. Oskar’s mother, Agnes (Angela Winkler), is ensconced in an unspoken polyamorous relationship with both her husband, Alfred (Mario Adorf), and her cousin, Jan (Daniel Olbrychski), the latter of whom Oskar believes is his biological father. When Agnes is later undeniably impregnated by Jan—at which point Alfred finally admits to his knowledge of and indifference toward her affair with her cousin—and ultimately dies in her attempts to prevent the birth, Alfred brings in a 16-year-old shop worker, Maria (Katharina Thalbach), whom both Oskar and Alfred end up seducing. The ensuing birth of Maria and Alfred’s son leaves Oskar convinced the boy is his own. When he steals a moment with the child, Oskar promises to buy him a tin drum on his third birthday, perpetuating the only worthwhile tradition he’s found in his chaotic world where nothing else is sacred.

Beyond the rally-turned-waltz scene, Schlöndorff takes every opportunity to place Nazi symbols in bizarre scenarios. As more and more people in Oskar’s life, including Alfred, don Nazi regalia, this encroaching threat is depicted largely as cartoonish or pathetic. A rinky-dink Nazi parade of a half dozen people trudges, ignored, down a street in one scene; a dwarf in a tuxedo weaves a unicycle through a series of tiny Nazi flags in another. Viewed in 2018, these scenes serve as a reminder that even at its most absurd, white nationalism possesses the seed of malignant ruin. The symbolism behind the death of Agnes also resonates today. After she is repulsed and grows ill at the sight of a fisherman pulling eels out of a horse’s head used as bait, Alfred nevertheless insists she eat the eels he’s purchased and prepared. When she finally does so, she embarks on a demented fish-binge over the ensuing weeks, which ultimately leads to her demise. In 2018, when faced with a torrent of vulgarity delivered on a 24-hour-loop, a penchant for compulsively consuming information that repulses us may be one of modern society’s greatest ills.

Despite winning an Oscar for the foreign-language film and the Palme d’Or at Cannes, The Tin Drum wasn’t universally well-received. The involvement of an 11-year-old actor in sex scenes—as relatively inexplicit as they are—led to censorship in Canada and the film briefly being banned in Oklahoma as recently at 1997. Roger Ebert notably took issue with the vague symbolism of the drum itself, asserting that even if it was meant as the manifestation of some moral authority, the “obnoxious” drumming by Oskar was still nevertheless, at best, the act of a “pious little bastard.” In an era when the President of the United States acts like a perpetual child who essentially throws screaming tantrums whenever he doesn’t get his way, some of the film’s subversive absurdism is lost on the audience. But current events aside, The Tin Drum remains one of the more intriguingly peculiar coming-of-age stories to come out of the late 20th century, and one that nimbly weaves between the fantastic and tragic with uncanny aplomb.