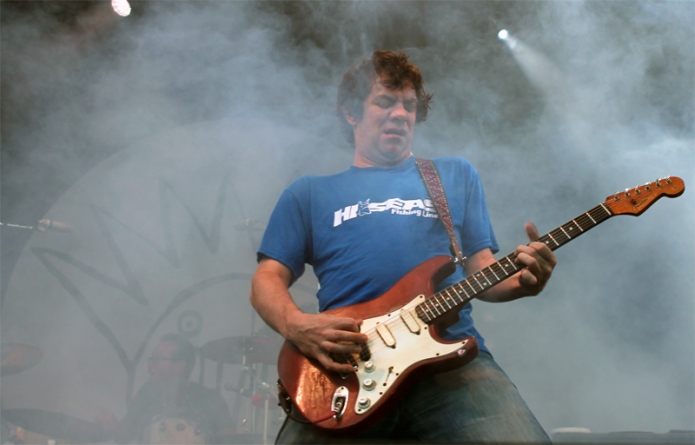 If you’re a fan of bizarre, fucked up jams done by virtuosic weirdos, there’s no better show in town than Ween.

On the drive to Ween’s second night at Edgefield Amphitheatre, Enjoy Your Life co-host Eric Mellor pointed out the band’s ties to the jam band circuit, guessing that this was the root of their big crowd draw (we’d both later see a man with a festival shirt listing Phish and Ween on the same top line, followed by My Morning Jacket). It popped a bubble for me: I’d never put together why the band had such an obsessive, Dead-like following – and why there’s so much tie-dye at their shows. As a normie, it made me feel entirely out of place, like a dorky interloper who had wandered into the wrong party. I’m a newcomer to the band – I was converted to the cult after seeing their Project Pabst festival show in 2016 – but it’s hard to ignore the fact that the band seems to have been hijacked by, in Eric’s words, “bro-hippies.” You know the type: they’re exactly the same dudes who’ll haunt your local sports bar/Buffalo Wild Wings, but here, they’re wearing tie-dye shirts (with the Boognish face on them, natch) and flip-flops – and maybe have dreadlocks.

This fanbase shift makes it easy to wonder – though it may sound remarkably judgmental – if the people gleefully singing along with the more shocking lyrics of “You Fucked Up” (“You fucked up, you bitch, you really fucked up/ You fucked up, you fuckin’ nazi whore”) and “With My Own Bare Hands” (“She’s gonna be my cock professor/ Studying my dick/ She’s gonna get a master’s degree in fucking me”) are laughing because it’s a parody of rock misogyny or if it’s because they find the misogyny funny. That’s not for me to say, but it’s a worrisome question to ask. The crowd energy created by the bro-hippies was enough to think twice about my need to see them again.

It’s not fair, though, to criticise Ween for the fanbase they’ve accidentally grown. Hearing them on record is a satisfying experience, but watching them perform is totally different. Live, they’re a jam band for people who don’t like jam bands, an incredibly tight five-piece that are freakishly adept at super-sizing their songs, stretching their solos into five-minute (or more) showboating. At one point, they departed into a mammoth riff on “Voodoo Lady,” one long enough that when Gene Ween finally returned to the mic to continue singing, I laughed involuntarily, having forgotten they were still in a song. Very little of the 28-song setlist remained in album-length form, which lead to the show lasting a whopping two hours and 40 minutes.

The 28 songs they played were a great mix, too. Though a few of the bigger hits were played the previous night – “Don’t Get 2 Close (2 My Fantasy),” “Touch My Tooter,” and “Spinal Meningitis (Got Me Down),” among others – the second night was just as packed with crowd-pleasers and deep cuts alike. The setlists on this tour have been career-spanning and superfan-friendly, and this one was no exception: for every “Roses Are Free” and “The Mollusk,” we got a “Kim Smoltz” and “Puffy Cloud,” the latter of which was performed by just Gene and Dean for their subdued, three-song encore. On top of everything, the band dusted off their cover of Metallica’s “Enter Sandman,” which they hadn’t played since a single tour in 2001, featuring Gene doing an excellent James Hetfield impression. Most bands would perform this song with their tongues in their cheeks, but Ween managed to keep their version straightforward enough to further stave off any need to see Metallica live.

Really, the best part about watching the band play for so long was seeing how much fun they still have with it 30+ years on. They write music like preternaturally talented but perpetually bored session musicians content to inhabit any style they want to explore, and they perform with a glee that matches this. Dean has the best guitar face in rock music, his face perpetually in a state of “my guitar has turned into a giant slug, but I can work with it,” his curly mop giving him the air of an overgrown 7-year-old who has been given his first Stratocaster. Gene, on the other hand, feels like that 7-year-old’s demented father, himself a talented shredder with a great vocal range.

The remainder of the band – drummer Claude Coleman, bassist Drew Dreiwitz, and keyboardist Glenn McClelland – might not have really spent time in the spotlight, but they’ve had their current lineup for over 20 years, meaning they’re perhaps the only people who can truly keep up with Gene and Dean. Dreiwitz, however, was given the spotlight for the electrifying Quebec opener “It’s Gonna Be A Long Night,” perhaps the shortest song of the main set. They sat out the encore, leaving just the two to play a trio of GodWeenSatan songs “Squelch the Weasel,” “Puffy Clouds,” and “Birthday Boy,” though they did come out to take a bow before the rapturous crowd.

No matter how hard I try, it’s hard to understand the formula for Ween. They’re like Guided By Voices for acid freaks, with just a dash of Frank Zappa – or perhaps a fusion between Grateful Dead and Tenacious D, with a fanbase to match. If you’re a fan of bizarre, fucked up jams done by virtuosic weirdos, there’s no better show in town than Ween. Their fans may make me question seeing them play again, but really, the band is just too good to turn down.