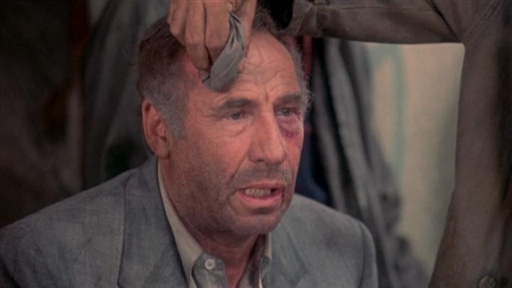 Life Stinks is not quite a disaster, but in its lifeless recapitulation of Trading Places-esque class comedy it lacks all of the trademarks that elevate even Brooks’ most anemic parodies.

Life Stinks is an anomaly in Mel Brooks’ filmography. After eight films of madcap farce, the director pulled back with a more conventional satiric comedy about a businessman, Goddard Bolt (Brooks), who callously seeks to buy up a derelict Los Angeles slum, expel the many homeless and other poor of the area, and install a colossal city center. At first blush, Bolt has much in common with many of the characters Brooks had played: megalomaniacal and defiantly ignorant of his own ignorance, surrounded by yes men who greet his every disgusting, narcissistic joke with supplicant chuckles. Yet where other Brooks figures would have spiraled immediately into absurdity, Bolt is kept somewhat grounded, a man depicted as almost plausible.

Bolt is visited by Vince Crasswell (Jeffrey Tambor), another businessman with his eyes on the area for similar property dreams. As the two squabble over the rights to the land, Crasswell proposes a bet: If Bolt can live among the homeless in the area for a month with no money or escape, he can have the land. If he fails, Crasswell gets the prize. What follows is a broadly obvious comedy of displacement in which Bolt is dropped into the streets and immediately suffers the cognitive dissonance of experiencing life at the opposite end of his supreme comfort. Within the first 24 hours, he has already gone half-mad from ubiquitous rats and filth, and his inability to procure food drives him to despair.

Gradually, Bolt falls in with some of the more kind denizens of this dilapidated realm, notably Sailor (Howard Morris), who boasts he almost joined the Navy but for a diagnosis of pleurisy, and Fumes (Theodore Wilson). These characters have little to differentiate themselves from each other, and the vagrants who make up the supporting cast form a kind of mass, projecting no individual identity but conveying a sense of the scale of LA’s wealth gap. Only Molly (Lesley Ann Warren), a beautiful ex-dancer who immediately catches Bolt’s eye, stands out from the pack. Whoopi Goldberg was reportedly considered for the part until Brooks balked at the idea of treating her as a love interest, but it’s hard not to wonder what her considerably comic presence might have brought to the role. As it is, Warren plays Molly as more tragic, traumatized by a bad relationship that unbalanced her mental health and prone to fits of pitiful self-castigation. Warren has no comic timing, and Brooks does not give her any funny lines, instead using Molly only as a springboard for Bolt’s human redemption.

Brooks proved himself a game hand at recreating some of the boldest visual trademarks of the material he parodied in his best-known work, but the direction here is drab and anonymous. Brooks favors unadorned setups of various scenarios, from hole-in-the-wall diner windows where Bolt attempts to snag a loose dish to a Catholic mission seen only from outside its perpetually locked doors. Only once does Brooks stage anything that hints at his visual acumen, a dance number between Bolt and Molly where purple lighting and a tracking spotlight breaks up the dull realism. The scene even ends with perhaps the only good joke in the entire film, of the two trying to consummate their romance as Bolt opens Molly’s coat, only to reveal a seemingly endless array of jackets, sweaters and blouses that he frantically unzips and tugs aside in his search for bare flesh as Molly screams for him to hurry.

Setting aside his biggest strength does not prompt the director to stretch to fill that gap, and instead it leaves a void at the heart of the film that renders it the worst thing a comedy can be: a mediocrity, unleavened even by an accidental joke. There’s potential in Brooks’ more relatable performance, a reminder of his considerable experience and training, and it’s a shame he never explored it further, as its one showcase remains a justly forgotten curio in the filmmaker’s career.