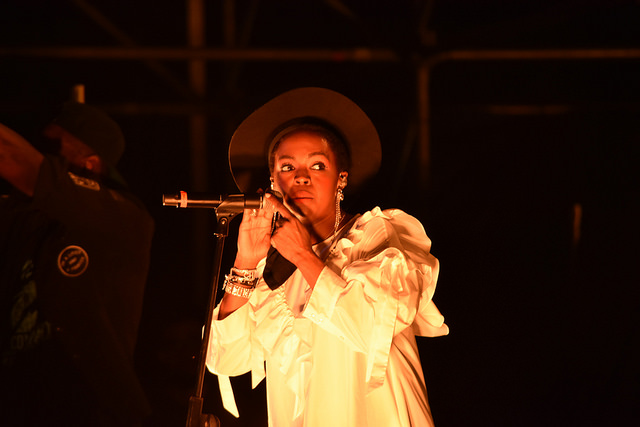 Hill can still put on a performance befitting her legacy as an artist.

If you Google “Lauryn Hill live review,” you’ll immediately understand my fears when I found out I was going to see the Lauryn Hill – performing The Miseducation of Lauryn Hill in its entirety to mark the 20th anniversary of the seminal album’s release, no less. Any feelings of excitement were blended with the worry that she would do exactly what she always seems to do: show up late (and by late, I mean 1-2 hours), perform a short (30-45 minute) set, and leave. If I got “Lost Ones” or “To Zion,” I’d consider myself lucky. It’s fitting, really, considering one of the first things we hear on Miseducation is her teacher calling roll, and discovering that she’s absent. That she was scheduled to take the stage at 8:45, but was given an end time of 11:30, seemed to indicate her lateness being baked into the evening. That showgoers for the evening had to account for the potential of total disappointment is an uncomfortable truth that comes with seeing Hill live. Worse still, this was likely exacerbated by the fact that the show’s openers – Nas and Santigold – were dropped without any advance warning to ticket holders and replaced with a two-and-a-half hour DJ set.

I arrived to Memorial Coliseum 15 minutes before Hill’s 8:45PM stage time, sure I’d have enough time to get in, grab a drink, and find my seat with plenty of time left to sit and wonder what makes an artist go on late so consistently. I didn’t have time for this, though, because before I knew it, I was scrambling to get through a beer line while she performed “Lost Ones” on the other end of the concrete wall. Not only did she not go on late, but she went on five minutes early. One’s gut reaction might be to quip “I guess having no opener makes it easier to show up on time,” but this is needless cynicism.

The “full album” show is a special kind of show. Knowing what the setlist will look like ahead of time can take the wind out of most people’s sails, but for those who hold reverence for the album being played, it turns the venue into a place of worship. As these kinds of shows happen in conjunction with an anniversary, they also serve as pop-up houses of nostalgia, where we get to hang out, talk about how the album has affected our lives, and sing along to the songs we’ve been in love with for so long. The legacy of Hill – and her sole solo album – is checkered enough that seeing her perform forces you to grapple with the flawed nature of Lauryn Hill, Person, rather than getting lost in the talent of Lauryn Hill, Performer.

Despite the spotty history of Hill The Person, it should be a relief to know that Hill The Performer gave everyone their money’s worth. Dressed in a poofy yellow dress, a denim jacket, and her ever-present headwrap (a look that screamed “going to a late-night diner after prom in ‘94,” but in a good way), she breezed through versions of each and every song from Miseducation – presumably reordered for flow, though it was hard to notice if this did actually improve things – with a full backing band and backup singers. When I say “a version,” I mean that these songs have been remixed to death, far removed from their original form. To further complicate things, the questionable acoustics of the Coliseum robbed the vocal power from Hill and her backup singers. The energy of everyone onstage helped counteract these issues, though, and Hill’s voice has aged wonderfully, which was one of my biggest concerns about the performance.

Hill saved the bulk of her stage banter for the tail end of the evening, where she gave an extended speech about the creative process of the record, touching on the legacy of the album without blundering into being self-aggrandizing. She closed her speech with a cheeky “Happy anniversary, Portland,” a touching moment that almost made me wonder why I was worried in the first place. She closed the Miseducation portion with a fiery version of “Doo-Wop (That Thing),” good enough to make the calamitous nature of the show feel almost totally worthwhile. Following this, we were given a trio of covers: her take on the “Ex-Factor” sampling Drake track “Nice for What,” “Ready or Not” from The Score, and her dynamite rendition of Roberta Flack’s “Killing Me Softly With His Song,” a trio good enough to make the weary Coliseum crowd convert any angst they may have felt pre-show into a volcano of hype. It’s hard to know whether or not to recommend seeing Hill perform – at least until she becomes a little more consistent with her attention to stage times – but it’s comforting to know she can still put on a performance befitting her legacy as an artist.