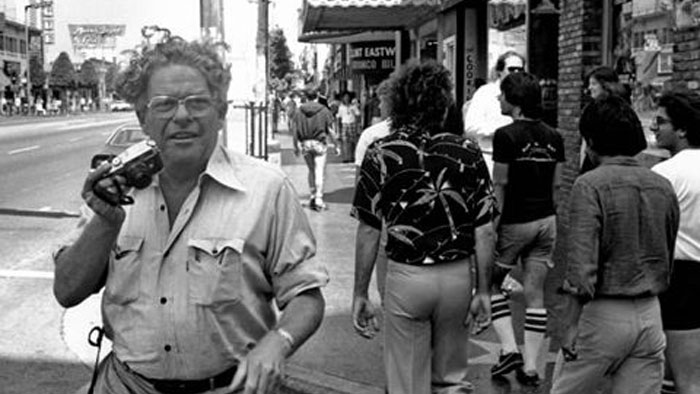 The almost tragic profile of an amiable, colorful workaholic artist whose subject was, simply, a changing America.

Street photographer Garry Winogrand (1928-1984) was an unusually physical shutterbug; he was known to run across the street, ignoring traffic just to line up a promising shot. He would jockey into position for his angled compositions, almost as if he were dancing with his prey, especially with wide-angle lenses that require one to get closer to a subject. As suits its own subject, the documentary Garry Winogrand: All Things Are Photographable is more dynamic than your typical study of the still image. If the available film and video footage doesn’t quite show him dancing, his body of work attests to a mobility that was stilled all too soon.

Director Sasha Waters Freyer structures the film like a conventional profile, charting the photographer’s childhood growing up in the Bronx and moving through his three marriages. Winogrand began his career working as a freelance photojournalist and concentrated on Manhattan as his subject. But glossy magazines were not conducive to his sprawling exploration. Soon after his first marriage fell apart, he broke out on his own, and with the support of a Guggenheim Fellowship he traveled along America’s highways for what would be some of his best work. You can see in his images that at the time, people didn’t mind being photographed, but as the decades went on and America changed, a suspicion crept in that wasn’t there before.

You can see such progression in books and museum exhibitions dedicated to Winogrand. But remembrances from family, friends and admirers help put the work into personal context that goes beyond the book. A revealing observation about an often dismissed period of Winogrand’s work comes from “Mad Men” creator Matthew Weiner, who explains that when researching his series about the alienated ad exec, he had trouble finding images of the divorced man of the ‘60s. Weiner found him in Winogrand’s 1969 book The Animals. This body of work taken at zoos was an engaging if seemingly superficial look at, well, animals at the zoo. But the pictures were made between marriages, and because of the location, the photographer was able to bring his two young children with him while he worked. Knowing this changes the way you look at the pictures; it lends a bittersweet tone to the photos of a man who was both desperate to work and longed to spend time with his kids.

That desperation led to a furious pace that has led some to call Winogrand the first digital photographer, in the sense that he wasn’t limited by the physical constraints of a roll of film. He shot and shot, 600 rolls a year as he explained to a fellow shutterbug. In fact, he shot so much film that, when he died in 1984, he left behind some 20,000 unprinted negatives and 2500 undeveloped rolls of film—images he never even lived to see. Students of photography will find Garry Winogrand; All Things Are Photographable essential viewing, of course, but it’s also the almost tragic profile of an amiable, colorful workaholic artist whose subject was, simply, a changing America.