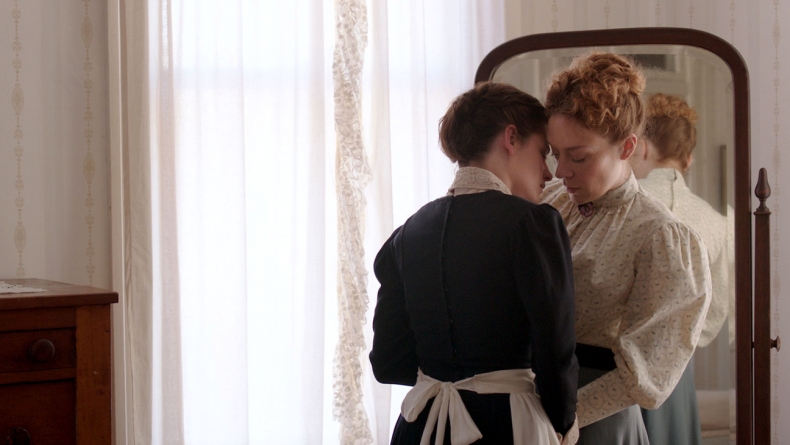 When the climactic sequence unfurls in full, any sense of righteous anger, sexual tension or cathartic release has dissipated.

The surging popularity of the true crime genre and macabre murder stories in general has taken us to many an inevitable destination The latest stop in our ongoing obsession is the tale of nineteenth-century murderess Lizzie Borden, whose infamous 1892 crime was immortalized in rhyme: Lizzie Borden took an axe and gave her father 40 whacks / When she saw what she had done, she gave her mother 41. It’s a gruesome incantation made doubly so by its cheerful cadence, but nothing in director Craig William Macneill’s Lizzie, an uneven and largely dull exploration of the build-up to Borden’s acts of parricide, is nearly as effective or memorable. That an entire feature film could be outdone by a two-line poem is perhaps proof that not every nook and cranny of true crime lore need be mined for contemporary audiences, and that, more often than not, what makes these stories so intriguing is how little we actually know about them in the first place.

Macneill, working alongside screenwriter Bryce Kass, depicts his version of the Borden story in a number of ways: deliberately-paced period piece; sleazy sex thriller; tragic melodrama and proto-feminist manifesto. The filmmakers are direct in their choices, even if none of them seem particularly developed or considered. Themes and ideas collide in ways that are distracting and incoherent. The best decision anybody here made was to put Chloe Sevigny and Kristen Stewart on screen together, and their performances help carry the film past aspects of the script’s clunkiness. The story combines recorded fact and fiction, suggesting that Borden (Sevigny), as a domestic dispute with her callous father (Jamey Sheridan) grew increasingly hostile, was carrying on a heated affair with Bridget (Stewart), the family maid.

Not much can been proven or disproven about what exactly led Borden to murder her parents, giving Macneill not only the room to monkey with the sordid details, but also the ability to paint her as a sort of feminist hero, a fiercely intelligent and brave woman who rebuked the social norms of her time. But in rushing to spice things up with alarming gore and ample nudity, the director takes an axe to the film’s tonal balance. He tries to make Lizzie too many things at once and the film’s weird structure can’t sustain the overflow of material. Things begin too slowly, where the first act makes too fine a point of considering each possible motive, giving time over to fleeting incidents and odd deviations that set up a number of possible explanations but don’t generate any narrative momentum. The sense of isolation is perhaps the most prevailing aspect of this early stretch, especially when Borden, already forced by her oppressive father to spend most of her time indoors, begins to suspect her uncle is attempting to write her out of the family will.

Enter Bridget, who is given the name “Maggie” upon becoming the Borden maid, a generic and dehumanizing moniker bestowed upon all the maids who’ve worked for the family. Lizzie is the only one to call Bridget by her real name—something historical record disputes, for what it’s worth—and teaches the impoverished Irish immigrant how to read and write. Things between them eventually blossom—unbelievably, unrealistically—into a heated romance, one that could land both of them in prison, or worse. The relationship somehow manages to get even more complicated from there, but none of it feels particularly urgent or dramatic, as if the film doesn’t take its own narrative stakes seriously.

Eventually, it becomes clear that Macneill and his collaborators are just twiddling their thumbs when not directly dealing with the incident in question, meaning the murder. Interestingly enough, the film plays its cards early, showing a brief glimpse of blood-spattered wallpaper in the opening moments before periodically circling back to depict the murders more explicitly and from different perspectives. The elliptical approach, which asks us to sit through moments of quiet and contemplation before returning to the action, speaks to the audience’s impatient attitude toward violence. By parsing out the “good stuff,” Macneill calls attention to salacious aspects of true crime and pulp narratives, giving Lizzie moments of self-reflexivity and auto-critique. The problem lies in the poor pacing: When the climactic sequence unfurls in full, any sense of righteous anger, sexual tension or cathartic release has dissipated. Not that those things couldn’t do with a more rhetorical touch, but sometimes you just need a bloody good time.