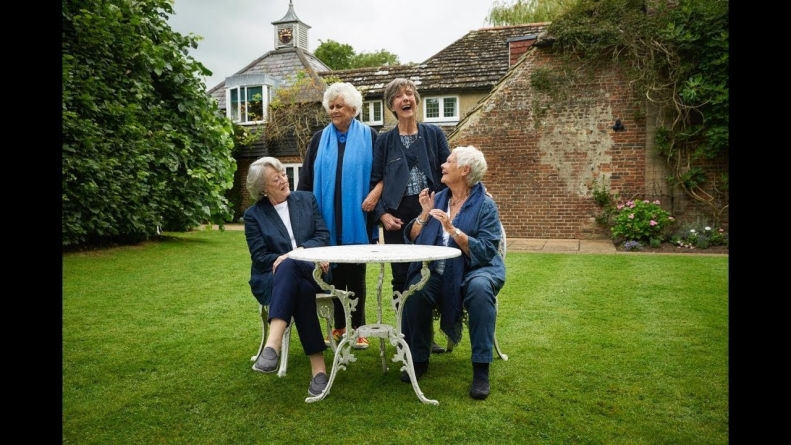 Celebrates the friendship of grand ladies of an era approaching its final curtain.

Directed by Roger Michell, the documentary Tea With The Dames features four of the great ladies of British theater and film, Dames Eileen Atkins, Judi Dench, Joan Plowright and Maggie Smith, in conversation about their lives and careers. The movie explores the history these women created on stage and screen–and is entirely too short. A slim 84 minutes would fail any of these women as a solo subject, but this tea is a decades old tradition among these ladies and its duration through an afternoon of sunshine and rain in the English countryside is the only access we are granted. Michell offers the illusion of real time from arrival to tea to the ladies ending the shoot because it has been a strain on their aged minds and bodies, but there the linear narrative ends. A little prompting sends the conversation into sidetracks both delightful and heart wrenching. These women didn’t start out with titles. They are workers, and their conversation is blue, bawdy and utterly human.

Those among you who have reached middle-age will have been watching performances by these women on PBS and prestige films for your entire lives, and they do not disappoint in your assumptions about who they are. Affection will only deepen during the show’s opening round about being a dame. None of them expected to receive such an honor. In fact, they all found it a dubious distinction, but one accepted to honor all the people who supported their careers. Starting out in the ‘50s, the stage was their common ambition, and a bit of the flabbergasted neophyte remains in each of them. It would seem that becoming an icon is a heady and absurd affair best dealt with by intermittent bouts of skewing and respect.

Anytime old friends get together, conversations tend to take on a feel of greatest hits, and there is some of that here, but there is also a great deal of honesty about being an actor and the additional hurdles women face in the arts. They each recount the tragedy of having their appearances critiqued by the men with the power to cast them. Aitkins’ case is particularly disgusting in retrospect because she was a teenager at the time and the two men talked about her like a mere object. Still, she found the compliment in their creepy assessment: “No, she’s not conventionally beautiful in any way…but she’s sexy. I carried that my whole career.”

One of the apparent goals of the documentary was to get Judi Dench to swear on screen, and it doesn’t take long for a “Fuck off” or two to arrive from the dame best known for playing queens. A natural order forms among the participants that is reflective of their star power. Plowright, somewhat diminished by her failing eyes and ears, offers insights less often than the others. Aitkins is presented as more reticent than her contemporaries. Dench and Smith join forces like the two superpowers they are with Dame Judi in the supporting role. You can’t help getting the sense that in life as in this documentary, Maggie Smith is a force that shares top billing with only a few. Funny, acerbic and prickly, you get the sense that she makes the best kind of friend, loyal and tenacious, and the most fearsome enemy should you cross her.

Part of this impression comes from archival footage of Smith sitting with her back straight, smoking a cigarette and batting away the casual sexism of her male interviewer between puffs. Then there are the stories the other women tell about her. Laurence Olivier looms large–he was Plowright’s husband and the major force in British theater throughout the early careers of these women. They feared Olivier more than the critics, all except Smith. A “merry war” existed between the two stalwarts, but when he was sick toward the end of his life and Plowright couldn’t be with him, it was Smith who held his hand and offered comfort.

The women talk of love and children. They recite lines and monologues that baffled them in their earlier lives. They marvel at the insidious fear that fills each of them before a performance. Harry Potter and James Bond make cameos when the conversation turns to staying employed in the current era of filmmaking. None of them wants to stop working and they all chide Dench for being forced to subsist on her leftovers.

Age is an inescapable aspect of this film, an imperative that drove Michell to capture this conversation while all the participants remain capable. They are the grand ladies of an era close to its final curtain and this film celebrates their friendship. Hopefully, time will be kind and the cameras will be invited to next year’s gathering.