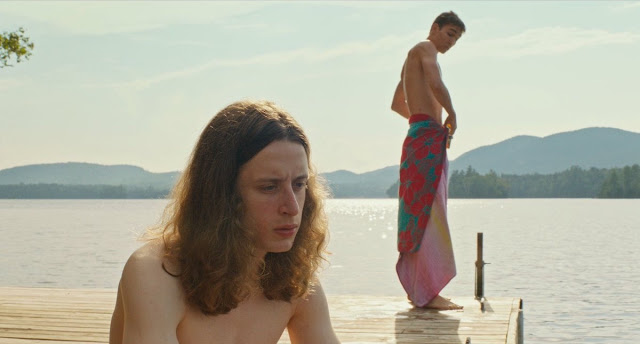 At least it looks pretty.

Filmmaker Ari Gold first popped on the scene with Adventures of Power, a cult comedy about the world of competitive air guitaring, so he’s no stranger to curious film premises. But his latest, The Song of Sway Lake, uses an off-kilter starting point to explore some indie cinema themes so prevalent they almost feel pedestrian.

The film is about the affluent Sway family and the lake named after their opulence. Rory Culkin plays Ollie Sway, the audience’s entry point into this generational saga. He returns to his grandmother’s lake house with his friend Nikolai (Robert Sheehan) for the express purpose of stealing a rare, valuable record from his deceased father’s collection. It’s a fascinating way to begin a movie, especially given the quirky, newsreel style opening Gold uses to explain the Sway family history, as well as the cultural and emotional significance of the record itself. Were this to be an inventive, lo-fi heist thriller, it would be a welcome entry into the genre.

But the premise is merely a device for a different kind of story. While Ollie and Nikolai’s ulterior motives loom large over the film’s narrative, this is ultimately a more navel-gazing tale about grief and the ways in which family and expectation can be a burden. Ollie’s grandmother Charlie (Mary Beth Peil) comes to the house to stay, alongside Elizabeth Peña as her long serving housekeeper Marlena, forming a sort of makeshift familial unit with the young thieves. Nikolai proves adept at schmoozing with Charlie, while Ollie becomes enamored with one of the neighboring girls, Isadora (Isabelle McNally), the film’s main love interest.

The film isn’t much longer than an hour and a half, but the middle third’s lackadaisical approach to pacing and storytelling makes it feel twice that. There’s minor moments of suspense and intrigue, sure, but from the moment Charlie arrives, what had the potential to be a really fascinating subversion of the heist genre devolves into a semi-charming dramedy that blends into the never-ending milieu of other, similarly written indie movies destined to be scrolled past in Netflix queues until the end of time.

If the film has a strength, it’s in the cast’s overall chemistry and the loving way Gold captures an admiration for vinyl. For as bland as the story feels, it’s shot competently, with some beautiful compositions and stirring sound design. But all the careful photography in the world can’t mask how terrible Sheehan’s cloying Russian accent is, or how Culkin has played this same, sullen protagonist so many times in his career. At times, these typecast elements for the two male leads make Sway Lake feel less like a real movie and more the half-forgotten dream of one, a hazy recollection of something one might have seen on IFC years ago.

There’s an underlying sweetness beneath the film’s persistent veneer of sadness and lament, but any time a film’s climax is punctuated by the words “…listen to this record…” it’s automatically relegated to appealing to a very specific kind of audience. For the viewer who will be moved to seismic emotional fervor at the film’s glacially dispersed moments of catharsis, Sway Lake should be a fine enough time, but for anyone else, it’s liable to feel like a real mess. It’s a film with a strong, original premise that disappears up its own asshole to capture a portrait of depression and dysfunction that’s neither revelatory or substantive enough to carry a whole picture. At least it looks pretty.