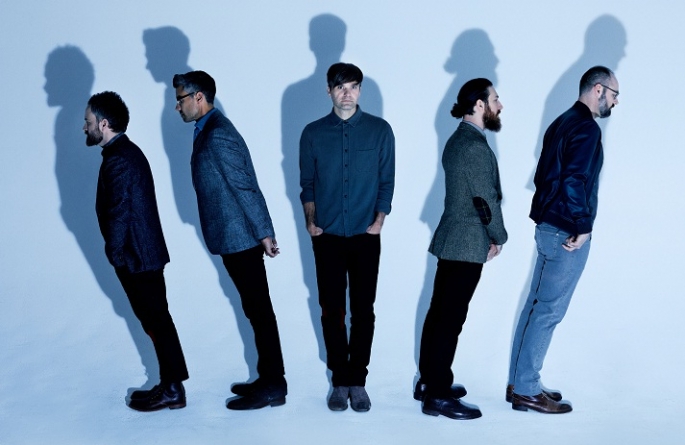 The divide between Death Cab Live and Death Cab on Record is wider than ever.

Sometimes, the difference between what a band sounds like on record and how they sound live can be staggering. On occasion, you meet a band that turns into something else entirely when they get on a stage. Such is the case with Death Cab for Cutie. This year’s Thank You for Today is a collection of serviceable (though never mind-blowing) songs rendered gutless by flat production and far too much polish. At first, their Keller Auditorium performance felt like an extension of this; album opener “I Dreamt We Spoke Again” showed minor signs of promise, but that promise was dashed by a limp rendition of “Summer Years.” With the entire band dressed in black, performing to a crowd of motionless Portlanders, it was easy to worry that the entire show would be this lifeless.

Three songs in, though, frontman Ben Gibbard addressed the crowd, politely asking people to get up and dance to the next one. He needn’t have bothered: by the time people processed that they were playing Plans cut “Crooked Teeth,” the Keller audience began to scramble to their feet, where they stayed for the remainder of the show. By the time the song finished and the band was strumming out The Photo Album‘s wry classic “Why You’d Want to Live Here” (which Gibbard flubbed the first stanza of), the entire room felt electrified—or, at least, as electrified as you can feel in a concert hall. I don’t know if the Keller was the only venue that would allow space for their gigantic light/screen array, but people standing at their seats doesn’t produce the same energy as a typical club show, sapping energy from some of the more propulsive songs of the set.

We’re a long way from the band who recorded Something About Airplanes 20 years ago, but if we’re going to be so far removed, it’s comforting that they’ve put together a performance so dazzling, packed with dazzling light arrays and, naturally, a humongous LED screen displaying a variety of abstract colors and shapes throughout the set. It’s hard to know if their music truly needs these touches, but more power to them for living out their arena-sized dreams. While pretty, it solidified the fact that this is a band that has lost their small-stage aesthetic entirely, in favor of being an arena-packing act.

What’s perplexing about the show is that the bulk of the material the band played from Thank You sounded remarkable, making one almost wish they’d skipped the slickness and recorded these songs live in studio. All told, they played nearly every song from the record, save for “When We Drive,” perhaps the album’s most forgettable song. When stripped of all the studio slickness present on the recording and rendered in front of a packed crowd, we’re shown a band that still has enough fire to put on a propulsive show, giving much-needed heft to those limp songs. We were treated to live debuts of standout tracks “60 & Punk,” “You Moved Away” and “Near/Far,” each of which packed far more punch in the Keller.

The rest of the show was made up of a career-spanning collection of fan favorites (“Soul Meets Body,” “Title & Registration,” and “I Will Possess Your Heart” were all present) as well as deeper cuts to satisfy the “Play the old stuff” crowd—“We’re going to do a couple old ones for you,” declared Gibbard before launching into a one-two-three punch of Something About Airplanes’ “President of What?”, We Have the Facts and We’re Voting Yes classic “Company Calls” and a phenomenal rendition of Plans’ “What Sarah Said,” which would have been a staggering run if it hadn’t come just a couple songs after the aforementioned “Why You’d Want to Live Here.” They wisely saved the blowout songs for last, closing the set proper with “Marching Bands of Manhattan,” with “The New Year” and “Transatlanticism” in closing out their encore—but not before Gibbard came out, alone, to perform “I Will Follow You Into the Dark” amid a wash of purple and orange light beams.

Death Cab for Cutie owes it to themselves to look inward and ask if the sterilizing gloss given to their last three albums is really working for them. That they are still so remarkably tight live, even after 20 years and a personnel change or two, is proof that they aren’t actually coming to the end of their lifespan—no matter how lame “Gold Rush” might still be. The divide between Death Cab Live and Death Cab on Record is wider than ever, but as long as they can still put on this kind of show, their big-tent dreams can be forgiven.