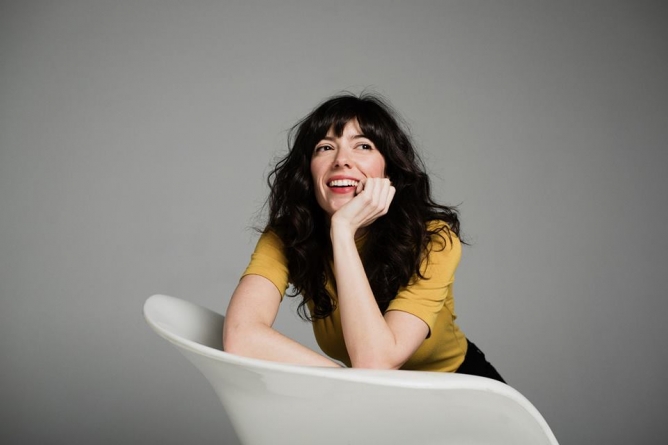 Infectious energy is the name of the game at a Natalie Prass performance.

Sometimes, you see an artist and think to yourself, “Please never play in a bigger venue.” It isn’t that you don’t want them to succeed; you’d just prefer they succeed while sticking to tiny, intimate rooms, preferably with the best acoustics possible. Such is the case with Natalie Prass. With two fantastic albums under her belt—2015’s Natalie Prass and this year’s The Future and the Past—she’s developed an aesthetic that works perfectly in spaces like, say, Mississippi Studios, one of the few rooms in Portland capable of doing justice to her sound. Her last Portland performance—opening for Fleet Foxes at Edgefield Amphitheatre last year—was roughly the polar opposite environment, her immaculately-produced songs losing their impact in the open air. She is an artist for whom a small space is almost integral to the performance.

Her performance at Mississippi Studios more than made up for this. She and her band, who were all perfectly put together in coordinated outfits, her bandmates in sky-blue pants, shirt and shoes, Prass in a yellow dress, played in front of an iridescent rainbow backdrop, giving the whole performance the most tasteful throwback vibes. These touches felt earnest, borne out of a desire to make the entire show a love letter to classic folk and funk sounds alike, and remarkably, none of this ever crossed the line into being over-the-top.

The biggest drawback to Prass’ live performances is one that nobody involved can be blamed for: her music just doesn’t sound the way it does on the record. For a different artist, this complaint might be confusing. But with her, you come for her beautiful songwriting and voice, but stay for the enchanting work she and producer Matthew E. White use to turn every song into a rich experience. Because Prass can’t realistically have people at every show playing the strings and horns present in some of her songs, or the backup singers of The Future cut “Sisters,” each of her songs has been reworked for a more traditional indie rock five-piece. The grooviness of The Future songs, as well as the delicate structures of the self-titled songs, remained totally intact, but were re-imagined in a way that helped demonstrate that turning them into less densely-produced affairs doesn’t make these songs any worse. And, luckily for us, these gently reinterpreted songs are each as good as their recorded counterparts. In at least one case—the encore of “Christy” with its twinkling strings re-imagined as muddy and hypnotic guitar—entirely enhanced the song. This is all elevated by the infectious energy of Prass and her backing band.

Infectious energy is the name of the game at a Natalie Prass performance. She and her band have outstanding stage chemistry, helped by the fact that she is recently engaged to drummer Eric Slick—which one person in the audience congratulated her for between songs—which made the show feel wholly electrified in a way that few shows are these days. All of these factors lent themselves wonderfully to two different occasions during the set (Future cuts “Ship Go Down” and “Short Court Style”), where the band ended the songs by getting into fun, noisy grooves that, somehow, still felt in the spirit of the otherwise-slick evening. They even took a moment between songs to let Slick and guitarist Dominic Angelella play a taste of a song by their other band, Philly noise band Lithuania, something that could seem intrusive, but was the mark of a bunch of friends happy to goof off together in front of a crowd. They even threw in a jangly cover of Prefab Sprout’s “Wild Horses” for good measure, because, why not?

Partway through the set, the band left the stage and Prass sat down at the keyboard. Before doing a haunting rendition of self-titled album standout “Far from You,” which she dedicated to Karen Carpenter, she drew attention to the sparkly backdrop they’d set up, joking about how much stuff she was going to make out of it when the tour ended. She went on to talk about how, as a backup plan “In case the music thing didn’t work out,” she used to make dog clothes. For a brief moment, it was easy to mistake this for a joke, and not for the reason you think. As she played “Far from You,” it seemed an almost absurd notion that the music thing might not work for her. Regardless of how big her venues are, Natalie Prass is already a star; it’s just a matter of time before everyone else catches on.