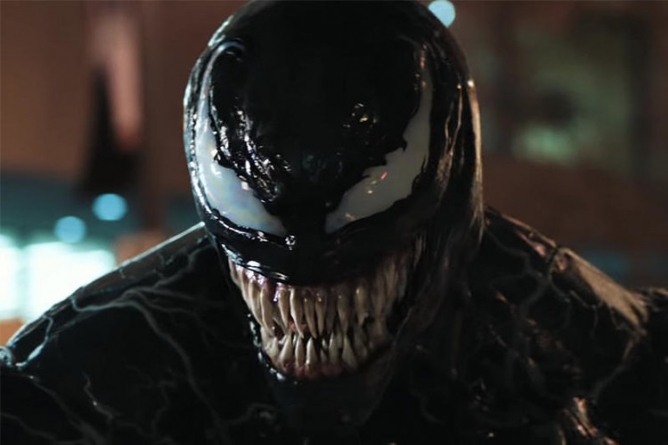 Venom is a project destined for a home alongside Catwoman and Elektra in every Bad Superhero Movie listicle to be published until the end of time.

Ever since Marvel brought Spider-Man into the MCU, Sony has been greenlighting multiple projects starring supporting characters from his corner of the Marvel Universe, creating an umbrella of productions best described as “Spider-Man Without Spider-Man.” Venom, the first and (sadly) most viable of these endeavors, may also be its last. It is, without question, one of the worst superhero films in recent memory, in a crowded landscape where even the pretty good ones feel worthy of eyerolls.

While later stories would see him grow into something of an anti-hero, Venom is one of Spider-Man’s most iconic villains, already having appeared in Sam Raimi’s rightfully maligned Spider-Man 3. But here, the character has been reconceived as a quirky protagonist, the strange center of a world designed, if nothing else, in the hopes that no audience member’s mind will drift to the natural question, “where the fuck is Spider-Man?”

So, the action moves from New York City to San Francisco. Eddie Brock (Tom Hardy), instead of being a jock bully, is a pathetic but well-intentioned muckraker. Eddie is engaged to a hot lawyer, Anne (Michelle Williams) and does a second-rate version of his once popular news show, where he uncovers corruption in a city that doesn’t seem to give a shit about his work. Elon Musk-type nutjob Carlton Drake (Riz Ahmed) is obsessed with finding a life for humanity beyond Earth, so one of his rockets comes back with alien life forms known as symbiotes, gross little goo monsters who need host bodies to survive. Eddie tries to expose Drake’s shifty practices, then Drake ruins Eddie’s life, then one of Drake’s aliens possesses Eddie, and you’ve got a makeshift superhero origin story.

In almost every way, the film’s generic structure loosely calls to mind the Raimi interpretation of the wall crawler, with its mixture of weird humor and horror, but it lacks Raimi’s coherent vision and his gift for actual filmmaking. It’s also a movie blatantly written by several different people with conflicting aims, because none of the film’s disparate elements line up to form a coherent whole. The dialogue is often terrible, the action messy and even the basics of visual storytelling fail from scene to scene. It feels like a movie from 2003, not 2018, complete with awkward comic book frames culled from Ang Lee’s Hulk film.

Fleischer, since Zombieland, has made nothing but critical and commercial failures, yet gets this cushy gig directing a mega-budget superhero flick anyway? He brings nothing unique to the table and trails the pack of similarly experienced music video helmers turned feature directors. Karyn Kusama was stuck in director jail for ages after Aeon Flux bombed, but given that he’s a youngish white dude in Hollywood, do not expect Venom’s demonstrably poor filmmaking to deter the industry from lining him up another sweet job in a calendar year’s time.

That his movie turned out watchable at all is a major testament to his talented cast, each of whom are trying their damnedest with material very much beneath them. Williams deserves some kind of award for transforming her threadbare love interest role with enough chutzpah to feel like a real character, even when that couldn’t be further from the truth. Ahmed, as the film’s villain, is miscast, but he doesn’t let not belonging anywhere near this production stop him from trying his ass off. But really, it’s the Tom Hardy show.

For the film’s doughy first third, his decision to make Eddie Brock so whiny and pathetic is pretty grating, but by the time the symbiote comes into play and he gets to play an over-the-top alien monster that’s equal parts Seymour from Little Shop of Horrors and Eddie Murphy’s Buddy Love from The Nutty Professor, it’s impossible not to be entertained. Had this movie been a little less toothless and not wasted so much time getting to the absurd magic of Tom Hardy talking to himself during an otherwise boring motorcycle chase, it would at least be guilty pleasure territory. Hardy, through sheer force of will, nearly makes the relationship between Eddie and the symbiote seem like a fully-fledged buddy film, a dynamic heavily teased for a sequel that’s unlikely to ever be made.

But outside of the odd thrills to be found in his actual portrayal of Venom, the movie is basically trash, a project destined for a home alongside Catwoman and Elektra in every Bad Superhero Movie listicle to be published until the end of time.