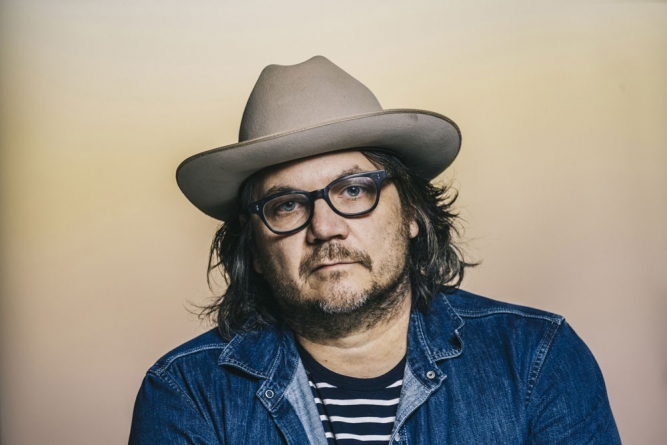 Tweedy is right that it’s hard to remain optimistic in world of Trump and Kavanaugh.

Touring musicians typically follow one of three business plans. There is the rare bird (á la Tom Waits) who only graces us with a live appearance once in a great while. Then there is the band that only comes to town on the album cycle. Lastly, consider the working musician, one you can count on to visit your city at least once a year. Jeff Tweedy falls squarely in the final category, constantly on tour whether it be solo or with Wilco.

Tweedy’s songs are a welcome balm to your daily troubles. Though his music is introspective and sad, there is a certain uplift in knowing that you can look forward to hearing “Passenger Side” and “Jesus, Etc.” each and every year, songs so ingrained in the collective conscious of alternative rock fans that they have become mantra.

Tweedy played a 90-minute, 20-song set at Portland’s Newmark Theatre, accompanied only by an acoustic guitar. As usual, he exuded warmth and self-deprecation during the banter with the audience which he clearly enjoys. And though Tweedy usually turns in an annual performance here in Portland, he does have a big November in store with both an impending solo record (WARM) and autobiography (Let’s Go (So We Can Get Back)) about to drop.

Dressed in a heavy khaki jacket, baggy black jeans and a white Stetson hat, Tweedy split the set between new songs, Yankee Hotel Foxtrot tracks, other Wilco favorites and a few rarities. Though Tweedy claimed some of the set was drawn from a fan request list, this group of songs was very similar to the other times I’ve seen Tweedy solo. He did announce, however, that the downside of the request option is that people ask for every single song in his catalog, including “I Thought I Held You” which he decried as “dogshit.”

After opening with a pair of new tracks, “Bombs Above” and “Some Birds,” Tweedy reached back to “I Am Trying to Break Your Heart,” the first of four Foxtrot songs of the evening. The crowd responded enthusiastically to these and other favorites such as “New Madrid” and “Hummingbird,” but the true moments of beauty came with side project songs such as “Remember the Mountain Bed” and “Laminated Cat.” In between songs, Tweedy was an engaging raconteur, referencing his performance at Pickathon last year, retelling the tale of Noah’s Ark in a profane manner and sharing some touching advice that his father imparted just before his death last year (only a small fraction of what he worried about actually came true). And though Tweedy is right that it’s hard to remain optimistic in world of Trump and Kavanaugh, a feeling of collective geniality settled over the audience.

As Tweedy has glided past 50 years on this planet, he really has nothing left to prove. He may never write songs again as important as those on the early Wilco records, but his golden voice is a panacea for a generation of aging music fans. After a mild performance of “Misunderstood,” a song that the younger Tweedy often shredded in concert, he opted to play the gentle Uncle Tupelo favorite “Acuff-Rose.” It was a warm and welcoming way to close a set by an artist who built a career railing against emotional trauma. It will do just fine until we see Jeff Tweedy next year.