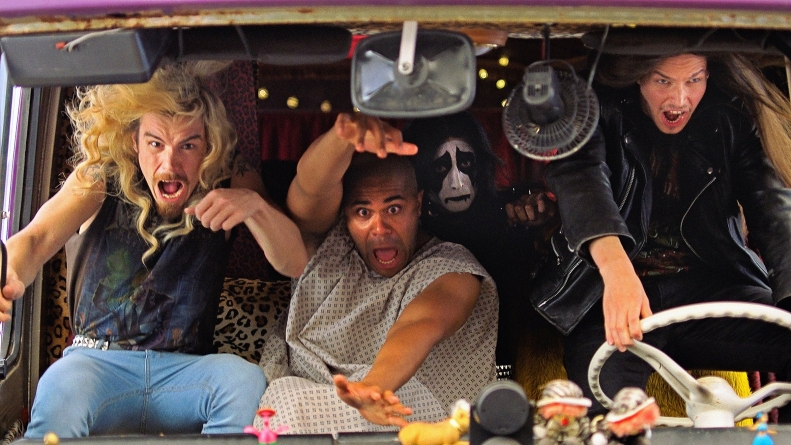 Despite their penchant for extreme subjects and gruesome aesthetics, your run-of-the-mill metalhead tends to be a reserved, thoughtful and outright pleasant individual. Veganism, feminism and social justice provide the foundation for many metal communities across the globe. All that darkness and brutality—not to mention the theatricality, bombast and melodrama—is often just a reflection of the boredom and dissatisfaction they feel toward a mainstream society that mostly rejects anything even remotely different. That’s certainly the case with Impaled Rektum, the “Symphonic Postapocalyptic Reindeer-Grinding Christ-Abusing Extreme War Pagan Fennoscandian metal” band depicted in Heavy Trip, a Finnish comedy that simultaneously pays homage to and pokes good-natured fun at the genre. Whether you’re a headbanger or a head-scratcher when it comes to metal music, the film (though maybe a bit too conventional and easygoing if you’re among the former) wins with standout performances, infectious humor and spirited reverence.

Impaled Rektum—shy vocalist Turo (Johannes Holopainen); brainiac bassist Pasi (Max Ovaska); jovial drummer and blast-beat expert Jynkky (Antti Heikkinen); blue-collar guitarist Lotvonen (Samuli Jaskio)—are the most metal dudes living in their remote village. Actually, they’re the only metal dudes living in their remote village, which makes them a target for harassment by the locals and keeps them disconnected from the scene at large. (A hard feat in Finland, where visiting tourists can literally book Scandinavian metal vacation packages.) For more than a decade, the band has struggled to cement their sound, that is until the day Lotvonen, working in the slaughterhouse owned by his family, accidentally gets a reindeer carcass snagged in an old corpse grinder. Inspired by the din of clanging metal, crunching bone and liquefying organs, he gives Turo a call, and in a scene straight out of Back to the Future,he holds the phone up to the noise and proclaims it to be the sound for which they’ve been searching. Sign of the horns commence.

Things really start looking up when a bigwig concert promoter stops by Lotvonen’s slaughterhouse in search of reindeer blood to use in an upcoming metal festival, giving Jynkky the opportunity to pass him the band’s promising new demo in hopes of landing a spot on the lineup. Not long after, Turo makes it seem as if they’ve already booked the gig as he tries to impress his unrequited crush, Miia (Minka Kuustonen). Word spreads quickly, and soon Impaled Rektum is the talk of the town, but in order to sustain the band’s newfound celebrity, Turo has to maintain the lie. Before long, the members of Impaled Rektum find themselves entangled in an increasingly complicated web of falsehoods, which first-time filmmakers Juuso Laatio and Jukka Vidgren use to structure a series of comedic set pieces that alternate between cringeworthy humor and highly physical slapstick. The script is also brimming with heavy metal in-jokes, bringing self-awareness and knowing satire to a film that often leans a bit too heavily on sitcom-level hijinks, some of which seem like they could have been lifted from the lyrics of actual heavy metal songs: coffins are exhumed from their graves; Vikings arrive on a warship; and war itself nearly breaks out as the band makes the determined decision to play the festival, lack of invite be damned.

As the story transitions from a naturalistic hangout flick to feel-good road movie to absurdist theater, the directors lose some footing. They avoid becoming too self-serious, something from which metal music often suffers, but Heavy Trip is occasionally too goofy and inane for its own good. More than a few scenes—including one where Turo wrestles with a feisty woodland creature for some reason—are over-the-top even by metal’s standards. What grounds the film, though, is the charming ensemble of morbid goofballs at the center of it all. The irresistible shaggy-dog story maintains an internal logic that makes even the most outlandish moments easy enough to swallow. The film eventually emerges as a sort of Scandinavian update of The Blues Brothers, right down to a direct reference in the script (“We’re on a mission from Satan”) to the action-packed climax. Unlike Jake and Elwood, though, the bros in Heavy Trip are also on a mission of self-actualization and self-discovery. Metalheads are just like anyone else, the film tells us, they just happen to be really into—as Turo’s costumed alter-ego “Xytrax” puts it—“mythology, occultism, Satanism and crappy fantasy novels.” Shouldn’t we all be?