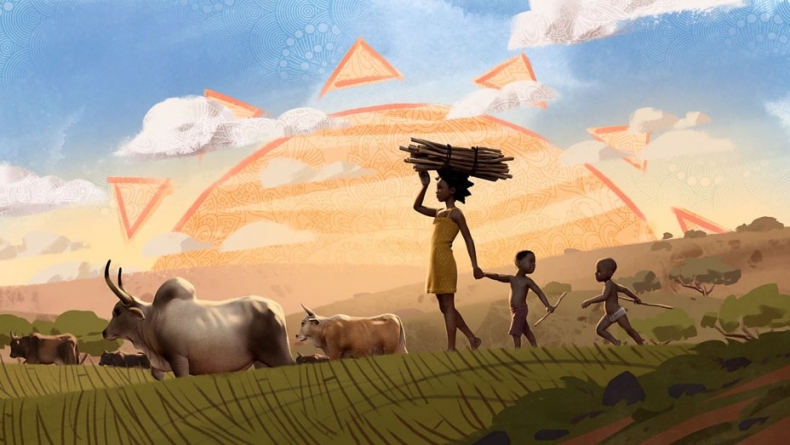 Liyana serves as a stark testament to the importance of film for everyday life, a message every cinephile can get behind.

Swaziland is a land-locked nation-state that, on a map, appears as a polka dot on the edge of the broader expanse of South Africa. It maintains a fierce pride in its Swazi culture and features wild mountains that served as the frontier between British and Portuguese colonial holdings. It is also the country in the world hardest hit by the HIV-AIDS epidemic. Combining the extremely high prevalence of the virus within the population (nearly one-fifth of the people are infected) with the high concentration of young people—Swaziland, like every underdeveloped country, is extraordinarily young as a national population—gives Swaziland an additional social issue: lots and lots of orphans. In fact, there are 200,000 orphans in Swaziland, a country with only 1.2 million people. A similar ratio in the United States would result in more than 50 million orphan children. It is an enormous and incomprehensible socioeconomic catastrophe.

This is the crucial context for understanding the film Liyana, which is a hybrid documentary/animated feature made by a handful of Swaziland orphans in collaboration with a local children’s book author. The film constantly cuts back and forth between the real-life children leading their daily lives at their orphanage and animated sequences progressing the story that the children at creating together. It makes for a unique, touching and enjoyable piece of cinema that is heavy on pathos; after all, the children storytellers are each no more than 12 years old.

Crafting the tale of Liyana, a brave Swaziland orphan girl who must rescue her kidnapped twin brothers, is therapeutic for the real-life children. The exercise is a way for them to deal with their own traumas and terrible life circumstances. In group sessions, they discuss and vote on the plot points, draw or sculpt story settings and major characters, act out important sequences (picture adorable, grinning children imitating crocodiles attacking) and work through their own past hardships. When not in art therapy, the children are shown doing their daily chores, such as tending the vegetable garden, herding cattle or gathering eggs.

Throughout the film, the cinematography and editing are very strong. Swaziland is rightly famous for its rugged mountains and Liyana captures them well. It is not quite Clouds of Sils Maria-level mountain photography, but then Assayas did not fill the rest of his frame with laughing 10-year-olds, either. The animation is computer-rendered, but is based on the markers-and-crayons drawings of the kids and looks really good. The editing features incredible cutting between animation and real life, precisely matching consecutive illustrated and photographed scenes, effectively blending the fairy tale with the real world. But while the visuals are indeed arresting, the obvious stars of the show are the children themselves and Liyana is deliberate in making sure that they are always front and center, because any viewer will instantly fall in love with their joyous smiles and energetic mannerisms.

When watching Liyana, it is impossible not to recall 2012’s remarkable The Act of Killing. Both are documentaries wherein the subjects use art that is familiar to them as a way of coming to terms with their own pasts. In both, the subjects have had difficult lives full of violence and suffering. But that is where the comparison ends. In The Act of Killing, the subjects are execrable men, genocidaires who systematically murdered hundreds of thousands of ethnic Chinese “Communists” in Indonesia in 1965. When coming to terms with their past, most of them glorify their slaughter. In Liyana, the subjects are young children orphaned by the HIV crisis, thrust into their circumstances by an anonymous cruelty far beyond their individual agency. Yet, in both films, the subjects require art as a conduit for transitioning from their brutal pasts into their unknown futures; both need cinema and visual storytelling in order to be whole. Liyana, then, like The Act of Killing, serves as a stark testament to the importance of film for everyday life, a message every cinephile can get behind.