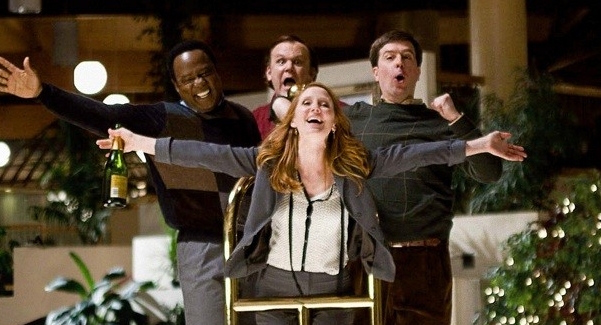 Cedar Rapids ultimately emerges as not merely “another character” in the film, or some sort of metaphorical “state of mind,” but something more profound and difficult to describe.

At the turn of the decade, mainstream American comedy cinema was riding a wave almost primarily generated by the style and professional network of one person: Judd Apatow. Beginning with The 40-Year-Old Virgin, Hollywood almost immediately adopted his model, generating films that were structured loosely, heavy on improvised dialogue and far raunchier than the PG-13 fare that had hitherto been the standard. The proliferation was so widespread that some of the best “Apatow” movies didn’t actually involve Apatow himself. Case in point: Cedar Rapids, the 2011 Sundance indie that had just about all of the Apatowian hallmarks. There was a lot of improv and foul-mouthed dialogue; the cast was full of Apatow go-tos like John C. Reilly and Ed Helms; even the film’s poster was a dead-ringer for Virgin’s—instead of the dopey protagonist framed against an orange background, it was the dopey protagonist framed against a blue background.

On the surface, Cedar Rapids looks like another comedy from the Guy Who Brought You™ Superbad and Forgetting Sarah Marshall, but it’s specifically Apatow’s absence that makes the film the best “Apatow” movie of the 2010s. The prevailing thought surrounding Apatow’s films, whether he wrote and directed them or just produced them, is that despite their vulgar nature, they’re actually kind of sweet at the core, or they at least impart the idea that bad language and explicit behavior doesn’t prevent people from making the right decision. Quite often, though, the “right decision” has a deeply moral streak: Saving oneself for marriage; forgoing abortion; embracing monogamy even though it feels unnatural and potentially harmful. Cedar Rapids has a more humanist perspective. It’s about people being forced down a pathway to hypocrisy based on making the “right decision.” It’s one of only a few “Apatow” films that are legitimately sweet, simply because it doesn’t force its characters into an unfair compromise. It also has some of the best dick and fart jokes the era had to offer.

Directed by Miguel Arteta, the film is about small-scale disillusion that manages to have a large-scale impact on the person experiencing it. That person is the painfully naive Tim Lippe (Helms), a prematurely middle-aged simpleton hailing from Brown Valley, Wisconsin, the place where he was born and raised and now makes a modest living selling insurance for Brownstar Insurance. When agency hotshot and Tim’s personal hero Roger (Thomas Lennon) bites the bullet after an autoerotic asphyxiation accident, the country mouse must go to town. Our hero, taking a plane for the first time in his life, is sent to the annual ASMI conference in the comparatively sprawling metropolis of Cedar Rapids, Iowa. Upon arrival, he makes a breathless call to Miss Vanderhai (Sigourney Weaver), his former middle-school teacher and current part-time lover. The motel has an indoor pool! And wouldn’t you believe it, his roommate is an “Afro-American man!”

The man in question is Ronald Wilkes (The Wire’s Isiah Whitlock Jr.), who, despite being an “Afro-American,” is even more of a square than Tim and poses far less of a threat than his other roommate, Dean Ziegler (Reilly), an irrepressibly vulgar loudmouth whom Tim has been expressly told to avoid. Ziegler sees the conference as an extended bacchanal, taking nips at breakfast while the staid Rotary Club types hold hands and pray over scrambled eggs. Rounding out the group is Joan Ostrowski-Fox (Anne Heche), a soccer mom who shares in Ziegler’s revelry albeit with a far more existential pretext. She arrives in Cedar Rapids with the weight of domesticity on her shoulders and views the ASMI conference as a way to address her life’s choices from a safe distance.

As the story gets going, it’s hard not to see “O-Fox, “Deanzie” and “The Ronimal” as the Tin Man, Scarecrow and Cowardly Lion to “Timbo’s” Dorothy. And, similar to the merry old Land of Oz, the motel where the conference is held operates as an autonomous space, a place where everyday rules are suspended, the big difference being the individual can opt to abide by rules of their own making. That, and the preponderance of brown and beige hues in lieu of a manic Technicolor dreamscape. Cedar Rapids has the stereotypical Midwestern aesthetic down pat, drawing forth Tim’s sense of repression and anxiety-driven modesty with off-white wallpaper and soft orange-yellow cinematography. A lot of the film’s humor comes from the incongruity of how it looks: completely exaggerated but also painfully dull.

The same can be said for the circumstances themselves. At the conference, Tim must vie for the coveted Two Diamonds award, which is given to the agency best exemplifying the moral standards and Christian values held by regional director Orin Helgesson (Kurtwood Smith). Brownstar has won the award three years running, and it’s up to Tim to make it four. With his predecessor having just David Carradine’d himself, he’s already working at a loss, and Arteta makes the situation’s miniscule stakes (it’s a no-name award given out at a small-town insurance conference in the middle of nowhere—who cares?) feel as enormous and high-pressure as Tim perceives them. But the award is a MacGuffin. The real conflict takes place within Tim’s psyche as he permits himself, under tutelage of his newfound comrades, to finally live a little. He’s shooting back drinks at the bar with Deanzie, gallivanting poolside with O-Fox and indulging in the kind of behavior that would appear modest in reality but is wild and debaucherous here.

There’s a unique sensibility at play in Cedar Rapids that’s largely brought on by producer Alexander Payne, a filmmaker whose comedic depictions of the Midwest have been labeled as cruel but have the kind of affectionate familiarity and good-natured sarcasm that only a true local could muster. Ditto John C. Reilly, who gives one of his best performances here, delivering exquisitely crass one-liners (“What exactly are you looking for, pussy-wise, in Cedar Rapids?”) and nailing the nasally vowel shift heard in Midwest accents from Minneapolis to Michigan and back again. Understanding the region and the people gives the humor authenticity, but it also provides a necessary context, particularly when it comes to Midwestern gullibility. As Tim starts to uncover the dark side of Helgesson and the ASMI conference—specifically that the publicly pious Helgesson is actually a crook and the Two Diamonds can be bought, which is exactly how Roger was able to have so much success—he’s faced with the kind of realities from which he’d previously been shielded, and he is presented with choices that shatter not only how he’s perceived his surroundings but also how he’s lived his entire life.

Heavy themes, to be sure, but Arteta and his collaborators maintain their lighthearted approach, doing so without ever compromising pathos, a tricky balancing act worthy of any great humanist farce. Unlike the traditional Apatow model, Cedar Rapids never makes anyone the butt of the joke or shrouds moral proclamations in the form of hard-R, gross-out comedy; it only celebrates people for their messiness, their idiosyncrasies and the unique ways they move through life. As dark as the film becomes, and as hard as things get for Tim, a pathway to redemption opens up in the form of trusted friends, communal forgiveness and a regained sense of self. Tim makes mistakes and yet remains unjudged, and Cedar Rapids ultimately emerges as not merely “another character” in the film, or some sort of metaphorical “state of mind,” but something more profound and difficult to describe. You can hear it, though, in the way Reilly pronounces it more like “Cidder Raypeds.”