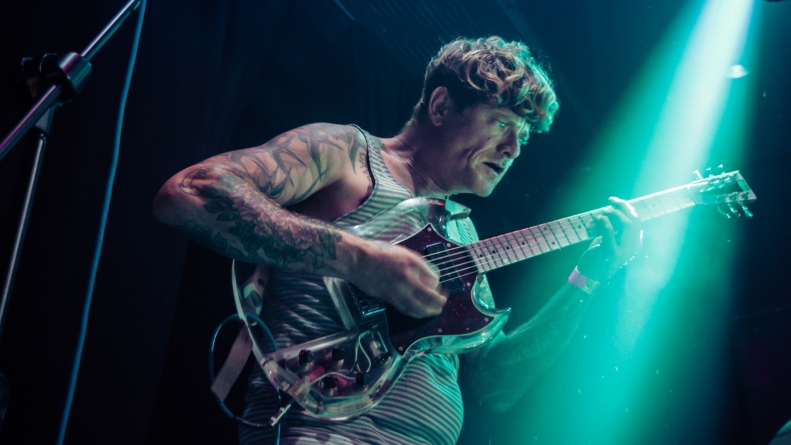 You’ll be hard pressed to find a better band to transport you to a place of sweat-drenched catharsis.

On paper, Oh Sees (formerly Thee Oh Sees, or OCS, like, twice, or some variation of all of these) are a good-to-great psych/garage band. They release new music on a consistent basis, quickly enough that the space between announcing a hiatus in 2013 and releasing 2014’s Drop was just nine months. What’s more, all of their albums range from “awesome, but inessential” to “ludicrously good” (see: Castlemania and Floating Coffin). Like many of the bands in their sphere, though, listening to their albums is just not the right way to experience them: you need to see them live.

The modern psych-rock scene is the closest thing the current generation has to jam bands. The art of sinking into a groove and following it for a while is a time-honored characteristic of all jam band performances. What sets this group of artists apart from the Phishes and Weens of the world is how the crowd reacts to this music; while those bands will get you dancing, Oh Sees shows exist in a space of total chaos. From the moment they began, the first 15 or so rows of people became a circle pit from which there was little escape. Crowdsurfers took flight roughly every 30 seconds, drifting by atop the crowd frequently enough that you began to wonder if venue security had been given orders to stand down, or at least focus more on other, worse behavior. Frontman John Dwyer is 44 years-old at this point, meaning he serves as a wonderful reminder that age is only a number, which likely contributed to the fact that the pit was just as full of people who weren’t college-age kids as those who were. If Dwyer can do what he does, we can shove each other around at a rock show for 90 minutes.

The problem with an Oh Sees show is that the full experience requires you to lose your focus on the music itself – it’s a fuel for the crowd’s actions, but it’s little more than a propellant. This is a shame, because Oh Sees are actually very talented. Dwyer’s crazed shredding works fantastically with his frantic vocals, both of which are further enhanced by his manic stage presence. Like David Yow of Jesus Lizard (who I caught in the same space roughly a week earlier), Dwyer performs with his whole body, exuding an energy that feels, at times, a little bit unsettling. Dressed in a ratty t-shirt with cut-off shorts and wielding a clear acrylic guitar, he looks like a gutter-punk who decided to just keep the aesthetic well into his 40s. And, really, this works perfectly for him. Their dual drummers Dan Rincon (my favorite of the two to watch) and Paul Quattrone (also of !!!) are nothing to sniffle at, either: they’re put front-and-center, a wise move considering how exciting it is to watch them work in lockstep.

Make no mistake: an Oh Sees show isn’t for everyone. The rowdy and aggressive crowd can make for a stressful environment for anyone who isn’t able to throw themselves into a pit, either because of anxiety or age or just a lack of desire. Worse still, the rowdy part of the crowd takes up enough space that those who don’t want to be part of it are pushed far back, leading to a feeling of disconnect from the performance; after all, when a band plays a show that kinetic, watching it from afar can rob it of its power. But If you’re willing to surrender yourself—both sonically and physically—entirely to Oh Sees, you’ll be hard pressed to find a better band to transport you to a place of sweat-drenched catharsis.