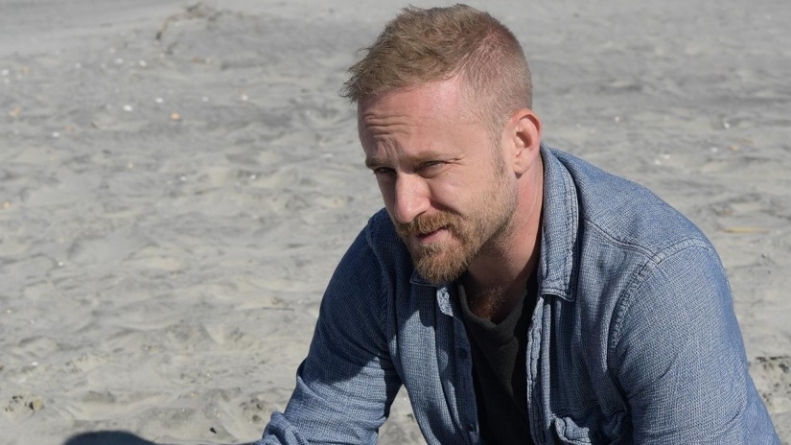 Galveston is little more than a pulp weepy with delusions of Cormac McCarthy, bolstered by a solid performance and a truly stirring epilogue, but not much else.

It’s strange that Mélanie Laurent’s second feature directorial effort would come from such painfully masculine source material. Not because a female filmmaker can’t do macho on screen, but because Galveston, the titular book this movie is based upon, is torturous in its repetitive, faux-poetic ruminations on hard boiled, tough guy bullshit.

The film, adapted from Nic Pizzolatto’s novel, follows Roy Cady (Ben Foster), a generic lifer criminal diagnosed with a terminal illness the day before his boss (played by Beau Bridges) double-crosses him on a job. Roy’s left holding the bag in a violent crisis and has to go on the run, taking surviving young sex worker Racquel (Elle Fanning) with him. What first appears to be the basis for some kind of crime-fiction love story, two lost souls hiding out on the raggedy edge of Texas towns in The Florida Project-esque hotels, turns into something far more depressing and bleak with the introduction of Racquel’s little sister.

Pizzolatto’s gruff, introspective style is still very much intact, but watered down by screenwriter Jim Hammett’s inability to take even the more interesting elements of the novel and translate them to the screen. The film is just so stubbornly inert, like a decent premise and a surprisingly plaintive conclusion in dire need of connective tissue between the two. It starts off okay and ends up with a lyrically executed coda that is almost worth the price of admission, but everything else along the way amounts to little more than smoke.

Foster is a capable leading man here, possessing an inherently compelling aura that elevates mediocre material, but Fanning is given nothing to work with. Laurent, as a filmmaker, seems to be coasting off thrift shop regifted imagery until the film’s closing stretch, where she experiments with a striking single-take sequence and really lets loose on the film’s tragic ending. But no one involved seems like they knew what kind of movie they wanted to make, or why they wanted to make it. It’s hard to imagine Pizzolatto doing much better had he adapted the book himself, but one has to believe it might have been at least a more salvageable proposition.

As it stands, Galveston is little more than a pulp weepy with delusions of Cormac McCarthy, bolstered by a solid performance and a truly stirring epilogue, but not much else.