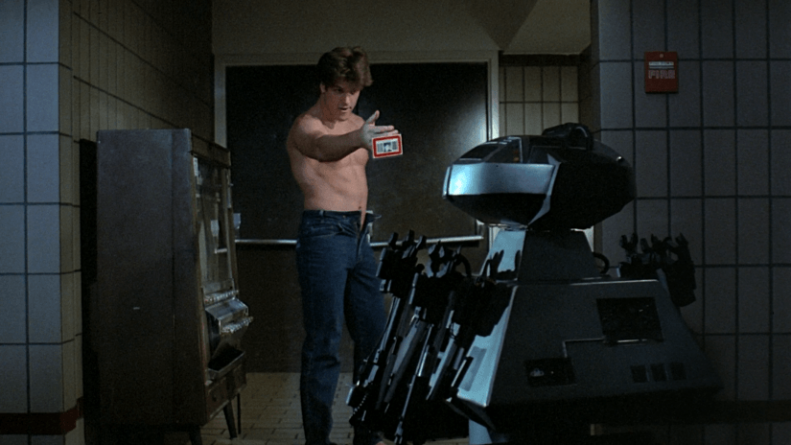 While Chopping Mall does traffic in slasher clichés, the film actually revolves around killer robot security guards that shoot neon-colored laser beams from their heads.

Stumble across Chopping Mall while scrolling through the glut of streaming B-movies and you’d be forgiven for thinking this was a typical ‘80s slasher flick. The implication of the slice-and-dice title is further embellished by the movie poster, which features a metallic hand gripping a shopping bag stuffed with dismembered body parts along with the cheeky tagline “Half off is just the beginning!” Of course, it’s often a mistake to judge a B-movie by its poster, and while Chopping Mall does traffic in slasher clichés, the film actually revolves around killer robot security guards that shoot neon-colored laser beams from their heads.

Originally and more accurately titled Killbots, this 1986 cheapie is directed by Jim Wynorski, whose lengthy resume helming exploitation films has a fair amount of overlap with Roger Corman productions but now consists primarily of skin flicks with recent titles like Sexipede!, Shark Babes and Scared Topless. While there’s some horny twentysomething hijinks in Chopping Mall—the film’s flimsy premise consists of a group of coeds shacking up in a shopping mall mattress store overnight in order to bang each other on display beds—the focus of this midnight movie remains primarily on stopping the newly installed security robots, which run amok and begin killing anything that moves after a lightning strike causes them to go haywire.

Produced by Julie Corman (Roger’s wife), Chopping Mall doesn’t waste time cutting to the chase. Rather than offer much preamble—the likes of which make even comparably cheesy horror romps like 1988’s Killer Klowns from Outer Space a bit of cringeworthy slog in the early going—the movie sets the killbots into action almost immediately. Unlike the menacing metallic hand on the movie poster, these awkward robots—which look like Johnny 5 from Short Circuit wearing a Cylon helmet—initially use a rudimentary mechanical clamp to manually dispatch victims, though things really get cranked up a notch when the coeds start fighting back.

Trapped inside the mall’s metal barriers blocking all exits, our heroes utilize gas cans to make supersized Molotov cocktails, the ensuing explosions adding action-movie overtones to a scary movie without any actual scares—slow-moving, clunky robots roving around a mall and dispensing a post-kill “Have a nice day” catchphrase in a cartoonish voice doesn’t exactly make the skin crawl. And other than a Scanners-esque exploding head and horror icon Barbara Crampton getting set ablaze, Chopping Mall doesn’t live up to the implied gore of its title, opting instead for laser blasts and pyrotechnics set to a garish synth score that practically oozes neon.

Prior to filming, Wynorski went to lunch with Roger Corman, who gave him a one-hour crash course on filmmaking. This served Wynorski well in squeezing the most out of a tiny budget and imbuing Chopping Mall with some modest, cheesy fun. The final version was also pared back to an efficient 77 minutes, which audiences found more palatable than the longer Killbots version. Though it doesn’t use its shopping mall setting for the kind of consumer culture commentary found on Romero’s Dawn of the Dead (1978), there’s ample retro-futurist quaintness in this film, as with most pre-internet B-movies with a technophobic bent. But by the time the dust settles, it still feels like we’re owed some chopping.