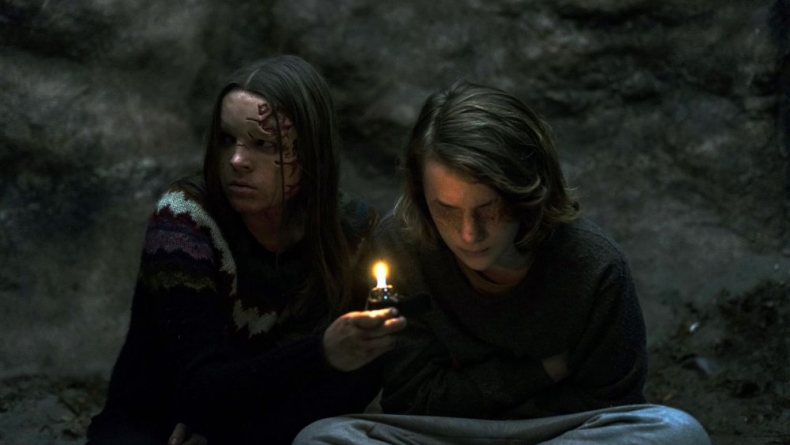 Slow-moving but consistently intriguing, The Dark is a fully-formed, dark fairy tale that balances its unvarnished portrayals of child abuse with a hefty serving of something lacking from genre fare as of late: hope. In the confident feature-length debut of writer-director Justin P. Lange, The Dark’s primary asset is a powerful central performance. Nadia Alexander (TV’s “The Sinner”) plays Mina, a reclusive, undead teen who, using an array of booby traps, captures prey in a foresty region known as “Devil’s Den.”

When creepy Josef (Karl Markovics) stumbles upon her lair, she makes quick work of him. But then she finds young Alex (Toby Nichols of Netflix’s “Iron Fist”) in his trunk. Alex’s eyes have been clawed out, and Mina’s monsterish shield begins to crack as Alex calls out for Josef, who not only kidnapped him but convinced him that he would murder his family if he tried to escape. Mina, who in her undead form strongly resembles the possessed version of The Exorcist’s Regan, reluctantly takes Alex under her wing, and the two misfits set out together. The narrative framework for their team-up is thin—Alex apparently needs a phone and Mina doesn’t have one—but the chemistry between the two of them is so strong that it’s easy enough to get on board.

The film’s opening minutes establish the existence of a significant monetary reward for the capture of Josef or the return of Alex, and the two youngsters run into a variety of opportunistic locals who have taken to the forest in order to secure the bounty. Mina dispatches each of them in terrifically violent fashion. Windpipes are torn out, heads are split with axes, old ladies are stabbed and eyes are gouged from their sockets. The diminutive Alexander’s performance recalls Saoirse Ronan’s turn as a young assassin in 2011’s Hanna, but rather than being exploitative, the violence instead serves to build a mythos around Mina. She is a monster through and through, which makes her sparing of and subsequent caring for Alex all the more poignant.

Brief but powerful flashbacks reveal Mina’s tragic backstory, though her undead origins are effectively left murky. Mina, like Alex, was the victim of sexual abuse, which played a significant part in her death and subsequent rebirth. This shared history draws her to Alex, and in time, the power she gained from her tragic personal history begins to rub off on him as well.

On the surface, The Dark appears to be a combination of Let the Right One In and The Professional. However, as it builds towards its unexpected and powerful climax, The Dark defies comparison. Its hopeful finale is at odds with not only the times we live in, but also with its horror genre siblings. Klemens Hufnagl’s bleak cinematography contains the occasional flash of colorful beauty, which subtly adds to the light-tinged edges of this dark fable. And though the supporting performances are uniformly poor, the central duo more than makes up for it. Nichols’ Alex is frail where Alexander’s Mina is brutal, but both actors’ performances suggest hidden depths.

Despite the film’s gradual pacing, it packs a significant amount of plot into its 95 minutes without over-explaining anything. Instead, the film invites the viewer to use her imagination when considering the circumstances that led to the protagonists’ situations. As a result, The Dark creates a powerful, violent and surprisingly hopeful fairy tale around childhood abuse.