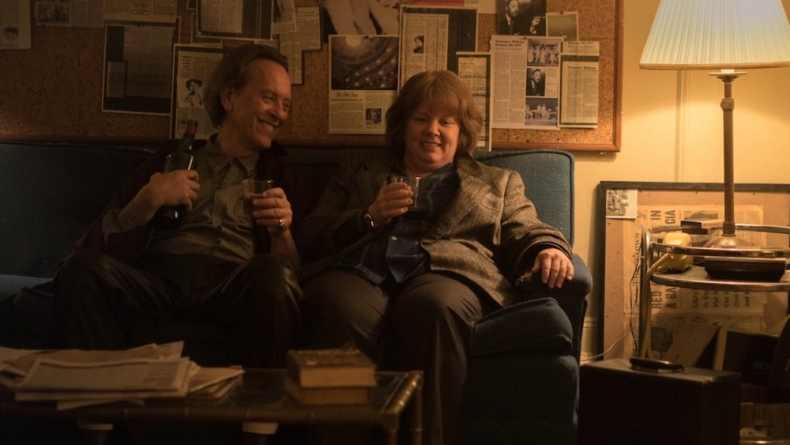 Can You Ever Forgive Me? gives us not one but two new, unique additions to pantheon of “good” bad guys.

Can You Ever Forgive Me? Mike McClelland

Cinema is overflowing with tales of loveable grifters. Han Solo, Lisbeth Salander, Danny (and Debbie) Ocean and even Aladdin are all examples of loveable cinematic criminals, and such a list could go on and on. Yet, through an endearing mixture of dark comedy, desperation and loneliness, Marielle Heller’s Can You Ever Forgive Me? gives us not one but two new, unique additions to pantheon of “good” bad guys. These are Melissa McCarthy’s Lee Israel and Richard E. Grant’s Jack Hock, an exceptional pair of queer, down-on-their-luck sad sacks who find friendship in one another and find joy in deceiving those who collect the handwritten letters of dead celebrities.

Director Heller (who directed 2015’s excellent Diary of a Teenage Girl) does well to embrace the darkness of Israel’s story. The film, based on Israel’s memoir, was adapted for the screen by acclaimed filmmaker Nicole Holofcener (Friends with Money) and Jeff Whitty (who won a Tony for writing Avenue Q), and wallows alongside Israel as she’s fired from her office job and ostracized from the literary community. Her agent (a well-cast Jane Curtin) tells her that readers aren’t looking for what she is writing, but the reality is that her agent isn’t interested in her work because she’s not a household name.

Israel resorts to selling her belongings to make ends meet, which means giving up a handwritten note from Katharine Hepburn. Surprised by how much she can get for it, Israel comes up with a plan; she can forge letters from dead celebrities and make a lot of money doing so. Along the way, Israel reconnects with her old friend Jack (Grant), a lonely, gay alcoholic with a sympathetic ear and acid wit. The two of them embark on a grand friendship, and through their friendship Heller examines how sad and scary gay life in the early ‘90s could be, even in a city like New York. Though the film is perhaps too shy of showing the actual queer lives of its two main characters (Israel’s primary romantic foil comes in the form of a cameo by the formidable Anna Deavere Smith), it doesn’t shy away from their queerness or its accompanying complications.

Though the script is tidy, the direction assured and the production smooth (particularly a jazzy score from the director’s brother Nate Heller), what elevates the film is the performances. McCarthy is (as always) foul-mouthed and hysterically funny, but there is something different here. She’s found a way to imbue every movement, every expression, with the prickly anger and sadness of a person who has been rejected from every sphere in which she tries to belong. Even her posture speaks volumes, as if she’s on constant defense, letting nothing and no one inside. The quality of her performance is nearly matched by Grant’s, who serves as the perfect foil. While Israel fights her circumstances with an icy, sarcastic shell, Grant’s Jack coats his sadness with a clown’s smile.

The film becomes a bit more formulaic when the law catches up with Israel (and Jack, who she recruits as an accomplice). But again, Heller is wise to keep the focus on her characters rather than fashioning a plot full of gotchas, twists or devastating comeuppance. She knows what works about Can You Ever Forgive Me? and she, McCarthy and Grant give consistently deliver the goods. It’s a funny, sad and strangely hopeful experience, one that feels old-fashioned in the sense that it is completely confident in the strength of its central characters and the performers playing them.