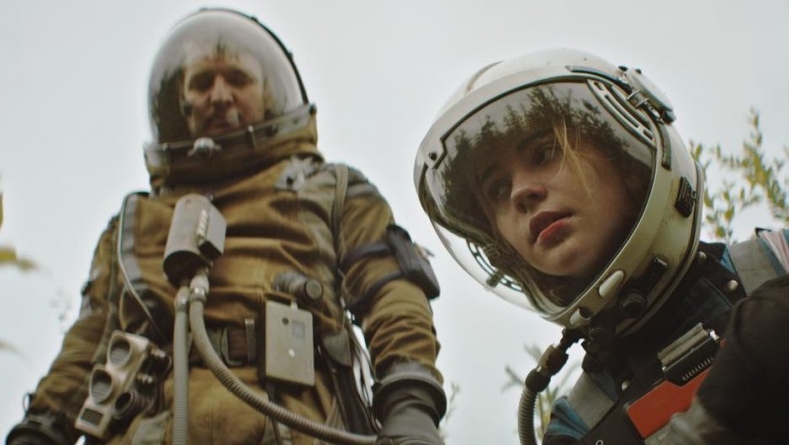 Prospect is a sturdy, satisfying and thought-provoking little film.

The feature-length debut of writers-directors Zeek Earl and Christopher Caldwell, Prospect is a small-scale science fiction and western mash-up. Though the narrative and characters occasionally feel underwritten, its setting and fantastic world-building make it worth a watch.

Though its universe has a Stars Wars feel, with a variety of vagabonds, scavengers, bounty hunters and adventurers popping up organically, the film’s driving purpose owes more to Alien. Just as Ridley Scott’s 1979 classic involved a working-class group of space-farers, Prospect trails Damon (Jay Duplass) and his daughter Cee (Sophie Thatcher), a couple of blue-collar prospectors on the hunt for precious jewels. This takes them to a remote, forest-covered “green moon” that is known for its Aurelacs – a kind of gemstone housed within an icky organic being. Specifically, they are looking for an area known as the “Queen’s Lair,” which is apparently overflowing with Aurelacs.

You can tell Earl and Caldwell are bright talents simply by their attention to detail, from the moon to the specifics of the Aurelacs. The co-directors based this feature-length debut on their 2014 short film of the same name, and the fantastic ideas they had in their short are built out subtly and successfully. Damon and Cee’s world feels fully thought out and believably lived in, and the filmmakers do a great job of showing rather than telling us what happens in this world. There is little exposition, and one of the more exciting parts of watching Prospect is weaving together the strings of world-building that Earl and Caldwell leave as they go along.

Soon after landing on the moon, Cee is forced to team up with the dangerous Ezra (Pedro Pascale), another prospector with a penchant for violence. While Cee’s character is relatively consistent throughout the film – she’s tough, and gets even tougher as danger builds – Ezra is trickier to pin down, and his interactions with Cee and others they meet along the way are often surprising.

Pascale and newcomer Thatcher have great chemistry, and their uneasy truce and its subsequent variations are all easy to believe. But character isn’t the focus here. Earl and Caldwell are far more interested in the unique, grungy spacefaring future they’ve created, and much of their energy goes into making that work. The visual effects are mostly practical, and Prospect looks far better than its small budget would suggest. Even the green-screened backdrops are beautifully rendered, with Earl and Caldwell emphasizing the moon’s forests and closeness to nearby planets to make their world an intriguing mixture of exposed and claustrophobic.

Though its completely different in terms of plot, Prospect is similar to this year’s acclaimed indie Upgrade in that it tells a hard, ambitious and atmospheric science fiction tale on a shoestring budget. Different models of distribution have allowed us to enter a new age of entertainment in which such small films are available to viewers around the world rather than just in a few theaters or specialty video shops.

Prospect is a sturdy, satisfying and thought-provoking little film. Zeek Earl and Christopher Caldwell have created a credible world, and one hopes they will go on to explore different corners of the future they’ve envisioned. Even the smallest details of their prospectors’ careers and equipment are developed, but they leave it for the audience to work everything out. It is a film that respects its viewers and the result is exciting and entertaining.