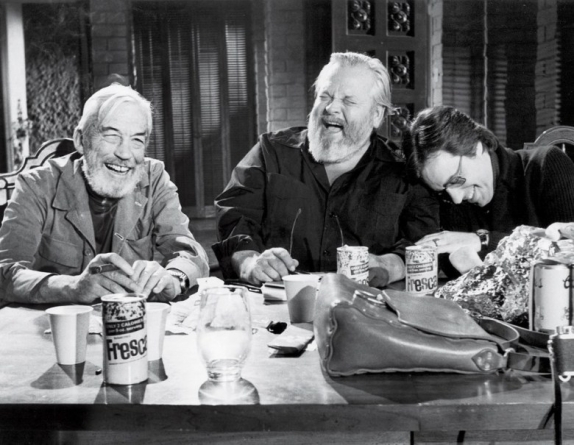 A boon to film lovers.

The Other Side of the Wind Jesse Cataldo

Shot sporadically between 1970 and 1976, The Other Side of the Wind then sat vaulted, incomplete and unedited, for another 42 years, with seemingly little likelihood that Orson Welles’ final work would ever see the light of day. It arrives somewhat miraculously in 2018, a boon to film lovers, although apparently an afterthought to anyone else, secreted into streaming on Netflix with little fanfare or publicity. A promotional and algorithmic failure, the film remains buried unless you know to search for it, a fitting fate considering Welles’ career-long struggles with the industry. Dead for 33 years, the late legend seems doomed to eternally pursue a spotlight which darts away just as he clears his throat.

Yet despite its unceremonious arrival and odd-duck status, The Other Side of the Wind is something marvelous, a movie out of time that throbs with caustic, outré vibrancy. Picking up on the director’s familiar late-career fixations, particularly the amorphous intermingling of fact and fiction and the endless travails of embattled creators, it thrums with nervous energy and twisted verve. The result is a doom-drenched farce that takes place across one wild day in the production of a misbegotten art film extravaganza, which we know from Peter Bogdanovich’s narrated intro will be the last of director Jake Hannaford’s life. John Huston stars as the renegade auteur past his prime, a Hemingwayesque bad boy attempting to refashion his art-brut image with an ennui-wracked, Antonioni-style epic, rife with nudity and arid desert sensuality. This footage seems intended to be cheesy, but as was his wont, Welles ends up trying to prove he can beat the subject of his derision at his own game, with the results serving as some of the most impressive moments in the movie despite their risible content.

Thick with both vivid color and chiaroscuro shadows, dotted with optical illusions and bravura bits of over-the-top symbolism, these passages are also the most stylized. But the rest of film follows suit, switching between black-and-white and color, an overlapping collage of loud imagery and clipped dialogue. A poison-pen letter poised at the Hollywood culture Welles felt had neglected and spurned him, The Other Side of the Wind rolls along like a Robert Altman project imbued with a sinister, maniacal edge. Owing to Hannaford’s predilection for capturing everything on celluloid, the entire story plays out in view of cameras, many of them located in remote, ridiculous vantage points, which leaves all the primary footage as antic outtakes from a reality show shot long before its time. This is a patently absurd conceit—especially considering the sprawling disorder of the action, the clashing formats and the highly processed nature of the footage—one that nicely furthers the bizarre disjunction between the film inside the film and the film inside the film inside the film. The hall-of-mirrors feel is compounded by repeated references back to Welles’ previous work, most notably a purposefully incoherent rehash of Touch of Evil’s famous bomb scene, in addition to many of his real-life relationships. There’s also an ample scattering of bizarre cameos, from the likes of Dennis Hopper, Cameron Crowe and Claude Chabrol, further amplifying the chaos.

That it’s all a huge, scintillating mess is also part of the deal. Bogdanovich, who shepherded the project to completion and appears within as Hannaford protégé Brooks Otterlake, has described The Other Side of the Wind as a film that even now is still ahead of its time. In some sense that’s true, considering its status as the potential font of an influence stream that never had the chance to exist. A sui generis side road to nowhere, it’s also a suitable footnote to one of cinema’s grandest, strangest careers, one that remained intently fascinated with the dramatic potential of such narrative dead ends. A roaring, maniacal final hurrah, it ends up perfectly memorializing a master filmmaker who always made great, massively ambitious art, even under the most frustrating of circumstances.