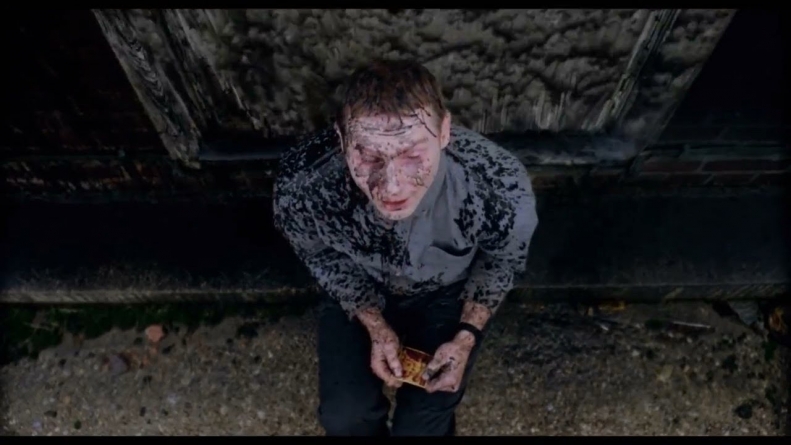 Long on atmosphere and short on script, Possum is a failure.

The bleak UK drama Possum is fueled by a loving homage to ‘70s British horror, and its central relationship seems drawn out of the darkest work of Harold Pinter. It builds to a riveting final act performed with heartbreaking realism. But despite all it has going for it, the movie’s undercooked plot and dialogue keep it from breaking out of its trauma.

Philip (Sean Harris) is a disgraced puppeteer who returns to the dreary home where he grew up with his stepfather, Maurice (Alun Armstrong). The film’s plot points are told obliquely; Philip is a man of few words. We see him on the train, staring at a schoolboy who later ends up abducted, and we see him take a huge spider puppet out of a leather satchel and try in vain to dispose of it. Maurice, who taunts Philip whenever he visits, is a cantankerous, sadistic old man whose cruelty is presumably behind Philip’s debilitating reticence.

Like The Babadook, the movie revolves around an eerie handmade book, a frightening children’s story illustrated with moody charcoal drawings that we assume are Philip’s. But the terror is clearly internal—these are Philips’s demons, which are made visible just by the dejected gait of Harris’ performance. The actor, perhaps best known from the Mission Impossible franchise as subtly menacing villain Solomon Lane, immerses himself in the role of an absolutely defeated middle-aged man. Harris’ inner shame suggests Robert Shaw’s performances in The Caretaker and The Birthday Party, and Maurice’ grimy flat seems to echo that milieu (as does a shot of Harris looking at himself in a mirror, which in this context is a clear reference to Joseph Losey’s The Servant, also scripted by Pinter).

Harris draws on deep wells of emotion for a portrayal that is at once repressed and revealing. But despite evident budget limitations—shots are repeated, not for narrative effect (hopefully) but as if to be padded for feature length—the film would seem to be perfectly suited for a kitchen-sink horror picture shot in black and white, or a 60-minute television drama set in the claustrophobic confines of a single set, all the better to focus on Harris’ tense body language and bitter facial expressions. It becomes clear early on that Philip’s frustrated attempts to get rid of the puppet are a metaphor for shaking some deep-seated trauma. Unfortunately, it also becomes clear that the metaphor distracts from the haunted inner lives of the central character—and worse, a way to compensate for their lack of development.

Along with Harris’ performance, startling sound design carries the movie along further than it might have gone, but it’s not far enough. Long on atmosphere and short on script, Possum is a failure, which makes its conclusion all the more frustrating. The closing scene, all Harris and Armstrong, is painfully real; Harris in particular is unafraid to plumb the depths of Philip’s tragic past. But it just reinforces the idea that the movie’s fantasy elements are distractions from a reality that’s too horrible for the director (but not the actors) to face—and one that would have made a far more powerful movie.