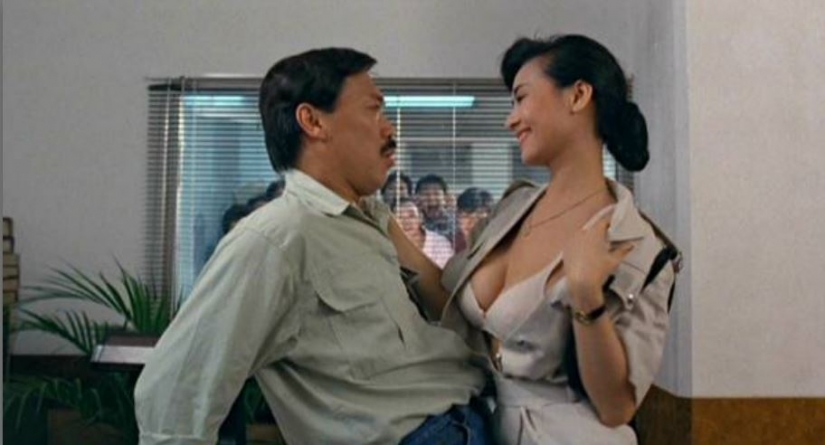 Look Out, Officer! is definitely bad—a hastily slapped-together collection of gags wound with supernatural mumbo jumbo—but also meets all the above qualifications.

Primarily familiar to Western audiences as the gonzo auteur behind goofball epics like Kung Fu Hustle and Shaolin Soccer, Stephen Chow is a Hong Kong luminary whose reputation is rightly deserved. Yet like many Cantonese stars of his era, he also spent the formative years of his career appearing in many, many films, a heavy portion of them disposable daytime diversions pumped out by a studio system which favored quantity over quality. A lot of these—in my admittedly limited experience—play out something like Look Out, Officer!, a madcap farce that gums up the gaps in its threadbare plot with outrageous bursts of magic, handmade special effects and raunchy, scatological humor. These movies are at least interesting, almost exclusively for their novelty and aggressive buffoonery, and always at least a little bit fun, even when they’re otherwise atrocious.

Look Out, Officer! is definitely bad—a hastily slapped-together collection of gags wound with supernatural mumbo jumbo—but also meets all the above qualifications. Pairing Chow with veteran stars Stanley Fung and Bill Tung, it’s a Shaw Brothers Remake of 1986’s Where’s Officer Tuba?, a Sammo Hung vehicle which, gauging from its poster, might also qualify as another prime candidate for Streaming Hell status. The plots of the two films seem to diverge fairly drastically, however, with the tried-and-true comedic method of employing an existing story as a very loose template, the foundation from which various bits of ghostly business can be expounded upon.

In this case, Chow plays Hsing, a rookie policeman mentored by the spirit of recently deceased detective Chang Piao (Tung). Flung to his doom by a sinister drug lord after accidentally infiltrating his warehouse lair, Piao is unable to enter heaven due to his death being administratively classed by the police force as a suicide. He thus needs Sing’s help, both in getting this decision reversed and taking down the bad guys, a quest that occupies roughly 30 minutes of the actual narrative here, leaving ample room for spectral hijinks, including an excruciatingly long series of skits involving the collection of various bodily secretions. This shaggy construction grants space for ample kookiness to set in; in several scenes a certain character’s spiritual devotion is rewarded by the ability to grow massively long arms, which wind their way through his cramped apartment, a pair of ridiculous props imbued with the thrashing, hilarious elasticity of an inflatable air dancer.

Details like this are so specifically weird that they inevitably inspire questions about whether they’re actually as random as they seem, and which cultural reference points the viewer might be missing, a pursuit that’s probably far less rewarding than just reveling in the amusing generosity of the visuals. The thing that holds Look Out, Officer! back the most, in fact, is not its blatant idiocy but the messy handling of its sketches, which are not properly timed, blocked or shot. Stupidity in the service of forcefully frivolous comedy can be transcendent, as many earlier movies have shown, and as Chow has repeatedly demonstrated in his own films. The bungled bits here make sense as a sloppy basis for the star’s more developed directorial style, which is capable of giving gags room to coalesce and build off one another, and makes one yearn for his steady hand.

Yet while Look Out, Officer! is shallow and more than a bit incoherent, it’s at least dotted with fascinating insights into life near the tail end of Hong Kong’s colonial period, particularly its attitudes toward religion and death. Key set pieces involve the ritualized burning of Ghost Money, a commercial for imported Swiss chocolate, appearances from a few heavenly deities, and the odd, recurring appearance of so-called Vietnamese Boat People. The latter were refugees from decades of conflict in the embattled country, still trickling into Hong Kong’s ports in the early ‘90s, and clearly a topic of some contemporary significance. Whether the film is attempting to express a social conscience by shoehorning in repeat mentions of their plight, or simply poking at a political sore spot for its comedic potential is hard to say. If you really squint, you might start to imagine a sympathetic commentary on the scourge of statelessness, inserted Trojan Horse-style amid the extended bouts of physical comedy, with Piao’s own inability to gain entrance to heaven matched against that of the refugees to find a permanent place to settle. Then there’s a ludicrous scene involving two grown men falling over each other to capture flatulent fumes in a jar, and all that blows away in an instant, like a fart in the wind.