Alina (Cristina Flutur) has rushed by train to visit her friend Voichita (Cosmina Stratan), now a devout nun at a small monastery. The two grew up in an orphanage together, where Alina had been Voichita’s protector and best friend, and the pair had once been lovers. Alina holds Voichita tightly when they meet, though Voichita demurs, trying to pull away. She has scrapped plans to go back to Germany with Alina as well, or at least put them on hold, though offers no explanation as to why she would rather stay in the small, isolated cloister led by an overbearing priest (Valeriu Andruita). It’s a tough life in the monastery, with no running water or electricity, and they are several miles from the nearest town, yet Voichita shows a curious dependence on the tiny group. Alina, who had been lonely and despondent in Germany, expected to find love and help from Voichita. Instead, she found a cold, stark monastery with an equally cold friend and no one to care for her.

Theatrically staged, often with a single camera documenting lengthy scenes, Cristian Mungiu’s latest film Beyond the Hills is as much a social commentary as his lauded 4 Months, 3 Weeks and 2 Days (2007), though less focused. Based on non-fiction novels by Tatiana Niculescu Bran about a fatal exorcism in Romania that made international headlines in 2005, the story seems ripe for another meditation on ethics and society. Though Mungiu pays deep attention to remaining both neutral and sympathetic to every viewpoint, there is an inherent limit to any understanding an audience can give to an organization who, through good intentions or not, caused the premature death of someone who was in desperate need of professional help. 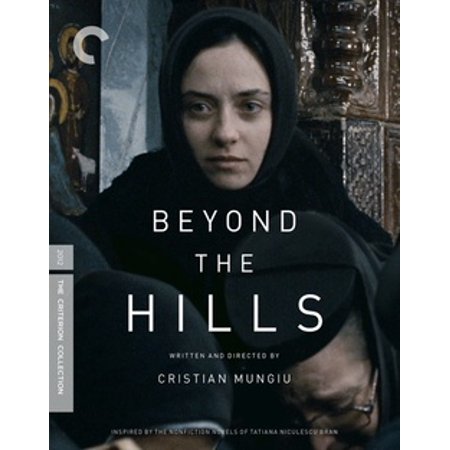 Alina stays at the monastery simply to be near Voichita, though begins to bristle at the domineering father and gossipy, judgmental sisters. Soon, Alina displays behavior that makes her appear unstable, though whether she is or not is always in question. When she has a seizure, or perhaps a panic attack, or maybe just angry in a way that the denizens of the monastery could not accept, the nuns descend like a murder of crows. Jumping on her and binding her with ropes, they drag her to a hospital where doctors prescribe both pills and prayers, then send her back to the monastery.

What happens to Alina after she returns from the hospital is a horror movie in slow motion, the film’s long, lingering scenes leading to the inevitable outcome. Voichita, whose eyes at first had been perpetually cast downward in submission, does little to stop it. She begins to lurk in the background, exceptionally pale and sporting dark circles around eyes that never seem to blink. She is a spectre, the embodiment of the kind of blind faith that demands God help her friend so she need not bother to do it herself.

Beyond the Hills won Best Screenplay at Cannes, and actresses Cristina Flutur and Cosmina Stratan were given the Best Actress award jointly, understandable as their characters, like their performances, are inextricably woven into each other; neither Alina nor Voichita could exist without the other. Their past in the orphanage and as protectors, friends and lovers links them forever, despite Voichita’s continuous attempts to deny it.

There is more than a passing similarity to the plot of Black Narcissus (1947) in Beyond the Hills, including the tendency to portray the female characters as hysterics, their overwrought reactions linked directly to their gender through dialogue, sexuality and the use of cultural assumptions. Embracing this stereotype unintentionally misdirects the audience, as Beyond the Hills is not about the dangers of cloistered, frustrated young women, but rather a story of a broken society, one so fractured that it is literally being rebuilt throughout the film. The hospital, city streets, the monastery, even Alina’s former foster home are all under repair. The people, too, are seeking repair, trying to find better lives for themselves. Voichita sees in the monastery a chance for her troubles to be fixed, and the unseen presence of numerous women lined up to take her place if she leaves speaks to the desperation of individuals in a society ill equipped to care for them.