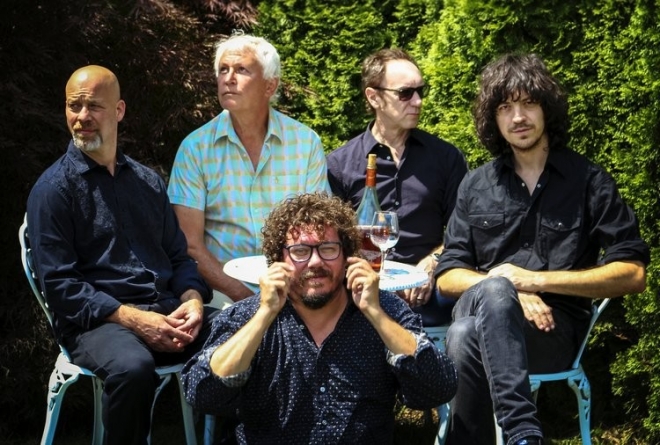 Guided by Voices are one of the most “bang for your buck” live bands on the planet.

Guided by Voices are one of the most “bang for your buck” live bands on the planet. A cursory look at the number of songs played over the course of a show can spoil other bands for you, as you wonder how a bunch of 50+-year-old rock dudes can have the stamina to play 40+ songs in a night, every night, when bands half their age struggle to play half as many songs in an evening. At their Wonder Ballroom performance, they performed a staggering 54 songs over the course of two hours, and while a few of those songs are pretty damn short, you still have to wonder who gave them permission to play shows like that.

At the center of everything is Bob Pollard, now 61 years old, who has more energy than you or me, no matter how old you are. The age of a musician rarely ever matters—as long as they can still play and sound good and put on a good show, why would anyone care—but when you watch Pollard perform, it’s truly easy to lose sight of the age of the man performing onstage. As you watch him wander the stage, chugging beer and doing high-kicks, blasting through song after song, it can be both inspiring and deflating; I’m 28, do I really have the right to wonder how much longer the show might go on, when the guy singing the songs is more than twice my age and putting out ten times more energy than I am capable of on most nights?

Age and setlist length don’t mean anything if the music isn’t good, of course, but Pollard’s hit ratio is better than most people alive. Each song played brought a new wave of “God, this is good,” from songs new and old. And boy, did they ever give us new songs: “We’ve got three new ones coming out next year,” Pollard said partway through the set, a comment that might sound like a joke from any other band; he’d go on to say that “By the time we get here, we’re done playing these songs! We’ve already got two more in the can!” But for GBV, this is not just serious, but common – they’ll release Woof & Warp, Zeppelin Over China and Rise of the Ants at some point in 2019, clearly to make up for lost time after only making one album this year (Space Gun, which also got heavy play in the set, perhaps the best album since the band’s reunion a decade ago).

If you’re not one of the obsessive acolytes of Pollard with an intimate knowledge of the man’s dizzying catalog (he’s released over 100 albums with various projects), these songs can blend in with the rest, an avalanche of well-made guitar pop; they’re a quintessential “If it ain’t broke, don’t fix it” band, remarkably consistent but still clearly the band that made Devil between My Toes 30 years ago. Luckily, even if you’re not one of those who knows the catalog like scripture, you are still bound to get a large handful that you’d be able to shout along to. They played through damn near all of the hits, from “Game of Pricks” and “I Am a Tree” to “Teenage FBI” and “Glad Girls.” We were even treated to beloved deeper cuts like Earthquake Glue’s “The Best of Jill Hives” and Mag Earwhig! belter “Jane of the Waking Universe,” a song one long-time fan told me he’d been waiting his entire GBV-showgoing career to see.

To top it all off, the crowd’s energy elevated the show past that of many of their recent Portland performances; I sadly missed 2017’s Doug Fir Lounge blowout, but reports indicate that the energy in that room was not unlike their Wonder Ballroom performance. GBV shows have the tendency to turn into rowdy, beer-soaked sing-alongs, and while this was true of this one, it felt like there was just a little more magic in the air than usual. The crowd seemed to be shouting extra hard during staples like “Motor Away,” “Echos Myron” and “Tractor Rape Chain,” an energy the band heavily fed on. The evening’s performance of Under the Bushes Under the Stars highlight “Cut-Out Witch” was the best iteration I’ve seen of the song, with the crowd chanting “TWO! THREE! FOUR!” in the moment of silence before the song’s first verse gives way to its raucous chorus, which in turn launched the crowd into a state of blissful seizure.

A Guided by Voices show isn’t for everybody, and even if it is, it’s something you may find yourself needing to prepare for. But it is a show I would recommend to anyone looking to see what the power of capital-R Rock music can do for a performer, if they’re able to give themselves over to the art completely. If you see them and find yourself checking your watch, just ask yourself, “What would Bob do?” before chugging another beer and throwing yourself into the crowd for another singalong.