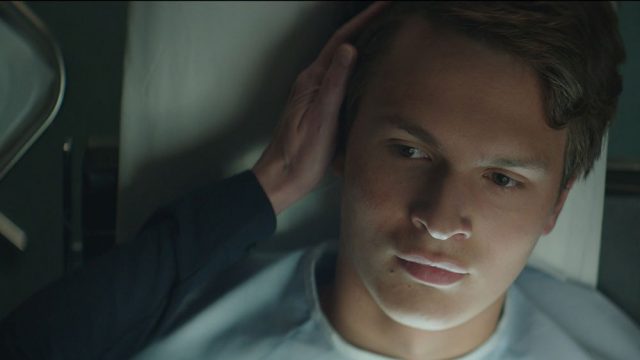 Jonathan presents questions but offers few answers in a film that deserves to be more philosophically fleshed-out than what is offered here.

“We have our limitations,” John tells his brother Jonathan in a video recording. “But if you think about it, if you combine what each of us has done in our lifetimes, put them together, we’ve accomplished a lot more than most people.” Jonathan and John represent the turbulent yet loving relationship of most twin brothers—the two cheer each other on, criticize one another and, when either of them has gone awry, slave over their collective safety. On the surface, this dynamic sounds pretty typical, but as the audience quickly finds out through the opening sequence, Jonathan and his brother John are anything but typical.

In an apparent attempt to surpass his career-launching performance in Baby Driver, Ansel Elgort plays the pair of brothers in Bill Oliver’s directorial debut Jonathan—brothers who live seemingly separate lives, but from inside the same body. Famously accomplished by Armie Hammer in The Social Network, Nicolas Cage in Adaptation and Tom Hardy in Legend, Elgort works to pull off a feat only a few have in recent history: playing twins.

With Elgort’s performance limited to one body, his portrayal of Jonathan/John is a unique effort, dissimilar to Hammer’s Winklevoss siblings, but vaguely resembling James McAvoy’s multi-personality Kevin from Split, only less twisted, murderous and not nearly as dynamic. Born with a disorder called Single Body Multi-Consciousness, Jonathan/John were abandoned by their mother at birth. However, their doctor, Mina Nariman (Patricia Clarkson), an expert on the siblings’ condition, adopts and raises them. Jonathan/John wear a timer—designed by Nariman and embedded behind their ear—to regulate their consciousness.

From 7am-7pm, Jonathan is in control of consciousness, while John takes over for 12 hours at night. Keeping their schedules in mind, John radiates as a charismatic yet careless spirit—he goes to bars, sleeps around and leaves his brother to do most of the chores. Jonathan is, as one might guess, quite the opposite. In fact, Jonathan is very high-maintenance; he cooks all the meals, speaks fluent French and aspires to be a great architect.

Naturally, the two personalities often clash. In order to maintain peace and some sense of order, Jonathan and John communicate with each other via video recording after each “shift” of consciousness. They have also established boundaries and rules that must not be broken for the sake of their own safety and that of others. One of those rules is no dating.

Jonathan has been feeling tired, so tired that he suspects John may be staying up too late, drinking or, even worse, involving himself with a girl. After hiring a personal investigator to spy on John during the night, which creates quite the confusion for the P.I. along the way, Jonathan’s suspicions are proven correct. After confronting his brother about Elena (Suki Waterhouse), the girl he has been dating, Jonathan gives an ultimatum: break up with her or tell Elena about “them.”

From this point, the brothers are thrown into a tailspin of calamity and betrayal. Though they once found comfort and stability living by each other’s trust and scheduled balance, all of that becomes unhinged with John’s violation of rules and Jonathan’s overwhelming jealousy. Unfortunately, the love-triangle storyline is neglected the rest of the way. In fact, the remainder of Jonathan focuses almost solely on the decline of John and Jonathan’s mental and physical health. With the combined deterioration between the two, the final act zeroes in on an underdeveloped story of survival. Because of this jarring storyline shift, the stakes of life and death feel empty when they should be pumping with heart, considering the poignant portrait of brotherly affection throughout the majority of the script. When the final heartbreaking moment rears its head, its devastating impact is carried by Elgort’s performance alone.

It may be worth noting that most of this story is told through the lens of Jonathan—a significant risk by Oliver, but one that has its negatives and positives. While not showing John’s point of view in fullness and as an equal to Jonathan may be a bit convenient performance-wise, audiences actually begin to believe John is an entirely separate person from his twin brother. It is quite impressive to project the totality of a brotherly relationship simply through video recordings to one another. Though it has become a trite comparison within the indie sci-fi realm, one would be hard-pressed to deny the slight “Black Mirror” vibes Jonathan presents due to the nature and means of interaction between the brothers.

Although its themes of family and mortality are emotional and weighty, questions of identity and autonomy are offered upon a deeper, existential level. In fact, a curious moment arises when Jonathan looks into the camera and asks, “Where are you?” While his words are directed toward his brother when the latter goes missing, the question operates rhetorically for the audience as well. In the end, Jonathan presents questions but offers few answers in a film that deserves to be more philosophically fleshed-out than what is offered here.

Born and raised in San Bernardino, California, Kyle is a journalism student at Biola University and a self-proclaimed film buff and music addict. A movie and music critic by trade, Kyle is a firm believer that watching film and listening to music go hand-in-hand. Because the two mediums make the world go round and humanity sane, it is his job to discern the good from the bad within the differing yet kindred realms of entertainment. Kyle would argue that The Cure is the greatest band to ever exist while Joy Division's Closer is the best album ever recorded. In addition to being an entertainment writer, Kyle can be found shooting concerts and doing street photography.