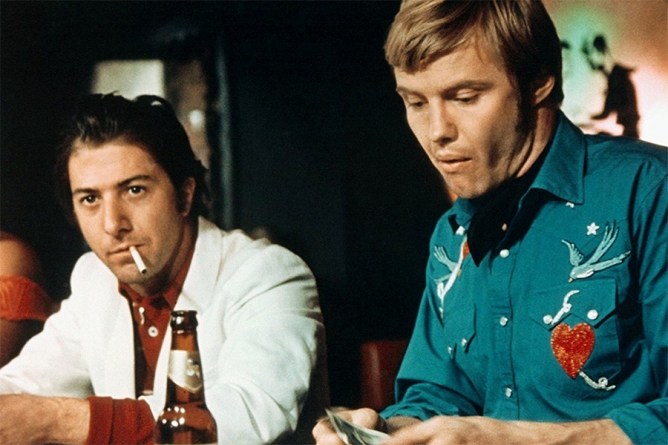 In the late 1960s, American cinema grew up and caught up to all the good work that European filmmakers had been doing for decades. Rather than focus on bloated epics and giant-sized musicals such as Dr. Zhivago, The Music Man and My Fair Lady, Hollywood began to acknowledge an unrecognized and underrepresented America, one filled with salt of the earth criminals, warring spouses and discontent suburbanites. By examining life on America’s seams, we began seeing stories about everyday folk, beautiful losers with dreams and fears, movies that focused more on character and mood rather than plot.

John Schlesinger’s Midnight Cowboy (1969) features two of cinema’s most indelible losers in Joe Buck (Jon Voight) and Enrico Salvatore “Ratso” Rizzo (Dustin Hoffman). Filmed in and around Times Square during an epoch when New York City was still gritty and sleazily vibrant, the movie brings the age-old trope of country boy trying to make it in the big city into the modern age. Yes, Joe Buck is a naïve rube who comes to Manhattan to achieve his dreams, but he isn’t looking to see his name in lights on Broadway. Instead, Joe believes that he can strike it rich in a less traditional manner. Being from Texas, Joe believes that all the men who live in the city are “tutti frutti” and therefore the women there crave the romanticized notion of masculinity that a cowboy, even a faux one, can offer. By pimping himself out as a Marlboro Man of sorts, Joe sees an escape from his life as a dishwasher in a crumbling town filled with negative memories. 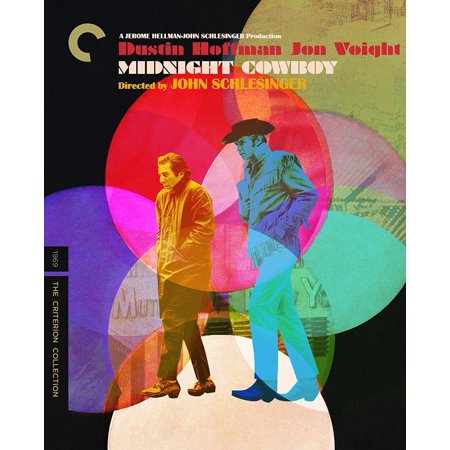 This is no fairytale as Midnight Cowboy traces the disintegration of Joe’s dreams and, ultimately, his humanity. Based on James Leo Herlihy’s 1965 novel, the film holds the dubious honor of being the only X-rated movie to win an Oscar for best picture. Released at nearly the same time as the creation of the MPAA’s rating system, the film depicts lurid subject matter such as nudity and frank sexuality, including homosexual activity, things that may seem commonplace today but were quite salacious in the late ‘60s. According to critic Mark Harris just a few years earlier, “frontal nudity in a mainstream Hollywood film was unthinkable.” Given an R-rating retroactively without any changes, Midnight Cowboy is a far cry from the pornography that earns an X-rating.

Yet this is a very adult film, one that still has the ability to shock nearly 50 years after its release. Some of the sex scenes are comical, especially the one where Joe is conned into giving money to a prostitute after they have sex, but the undercurrent of violence, one that eventually bursts to the forefront, is real and edgy. Schlesinger traces the diminishing of Joe’s dreams as he realizes that he is out of step with the grifters, cruisers and druggies that populate Times Square. You would think the scene where Joe threatens to beat a john (Bob Balaban) after he confesses that he has no money is the character’s nadir. But it only gets worse.

The film’s true heart focuses on the relationship between Joe and Ratso, a common hood who cons the cowboy when he first arrives in New York. Eventually, the men move in together, living in Ratso’s dilapidated apartment in squalor. The sickly Ratso offers to manage Joe, who agrees, oblivious to the fact that Ratso is so broke that he routinely checks payphones for spare change. Just like Joe hoped to come to the city to find his dreams, Ratso wishes to move to Florida, a place he sees as a land of oranges and eternal sunshine, far away from the grime and grit of New York.

In such a harsh milieu, there is something tender about how Joe and Ratso eventually care for one another. Though they don’t necessary treat each other very well – Joe accuses Ratso of being a virgin, Ratso says Joe will only attract “f*gs” with his cowboy persona- there is something very real about two kindred spirits, two losers finding one another on the tough streets of New York. Ratso cooks for his friend and helps him dream up schemes while Joe wants to help his pal get to Florida. Though never character is inherently gay, nor seems to want to sleep with one another, there is a deep love that connects them both.

Schlesinger’s depiction of homosexuality can be uncomfortable especially when revisiting Midnight Cowboy circa 2018. A gay man himself, Schlesinger depicts most of the johns who cruise Joe as nervous and pathetic. Ratso has no trouble using the word “f*gg*t” even in the company of gay folks. That word has essentially vanished from modern cinema, making its appearance downright shocking. It is unclear if Joe is bisexual; in Herlihy’s novel he enjoys both male and female lovers. Yet Schlesinger doesn’t seem interested in exploring that portion of Joe’s personality. Instead, he focuses more on the idea of manliness and the American notion that a “real man” is someone like John Wayne.

Despite some cinematic flourishes specific to the 1960s that haven’t aged well, Midnight Cowboy endures as a powerful look at the relationship between two men who have reached rock bottom. Though it is obvious that Ratso knows he has arrived at his nadir long before the film begins, Joe refuses to see how fall he has fallen, even after selling blood for a quick cash infusion. It isn’t until the brutal beating and robbery of a would-be client that Joe realizes he has bottomed out. But is it too late for redemption? It depends on how you interpret the end of the film where Ratso and Joe hop a bus for Miami. When his friend dies en route, Joe arrives in Florida cradling a corpse. He has thrown away his cowboy gear, looks ready to start again. But is the final image a tender farewell to his friend who has helped him reach a new start or is he getting to Miami just like Rizzo, dead on arrival?